If you’re anything like me, then you can look at photos of cats all day long. And the best thing about cats? Every single one of them is beautiful. When it comes to social media, I know that I’d much rather fill my feed with cute photos of cats over anything else. And for Kristine and Stuart, they figured why not share their six rescue kitties with the world every single day to hopefully make others smile. 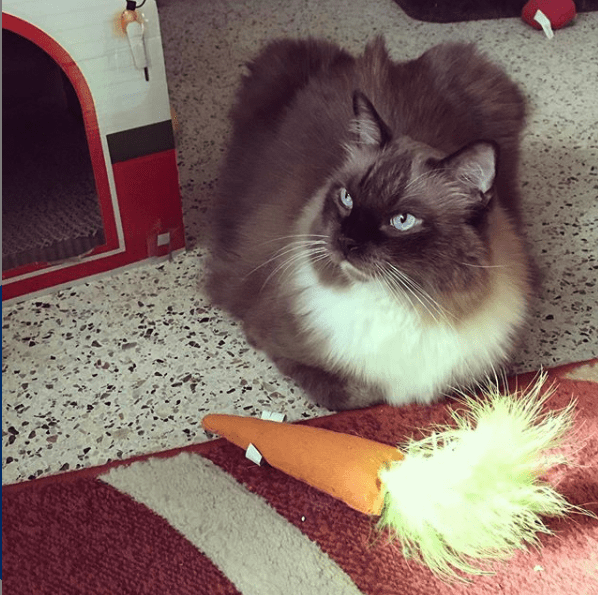 Together the cats spend their days in the Sunshine State, passing the time being effortlessly adorable, posing for the camera, and being spoiled—of course! Martini might be the star who loves to pose, but he’s kind enough to share the spotlight with adorable cat mates, too.

I reached out to their owners to find out a little more about this posse of cool cats, and they were kind enough to share many interesting details with me about this cool clowder of rescue kitties. Keep reading to find their answers to my questions below. Enjoy! 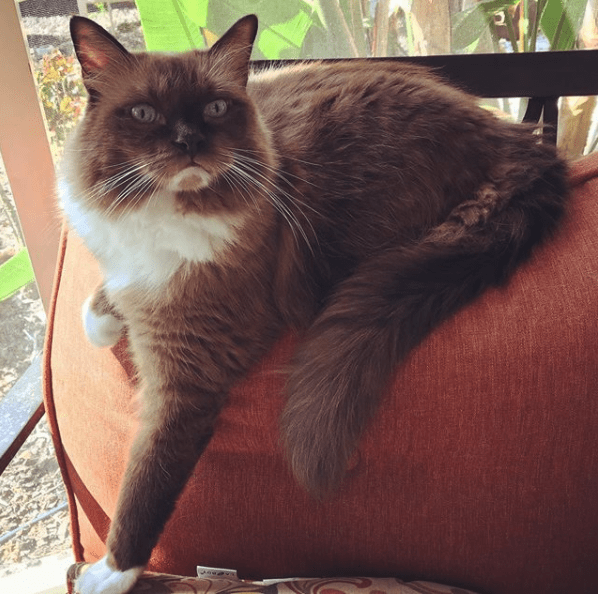 Owned for 7 months, adopted from a rescue organization (Rescue Cats of Florida) after his former owner surrendered him to a kill shelter.

Favorite activity: Hanging out on the catio. 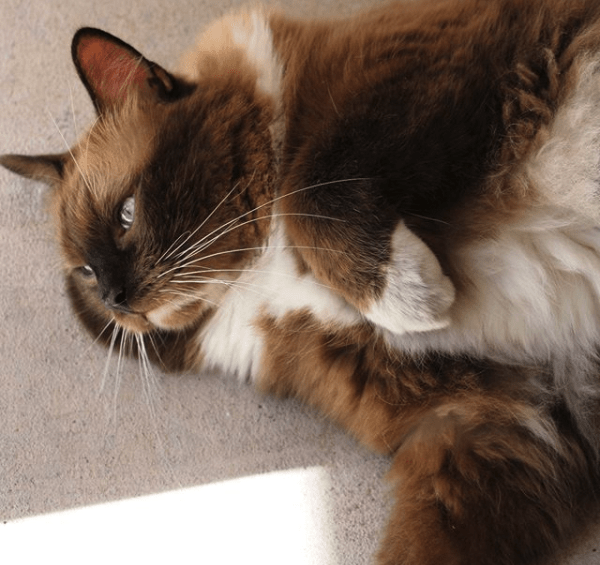 “We were not planning to adopt another cat! Then I saw Martin on Facebook (see my April 9 IG post below) and fell in love at first sight. We weren’t really sure what we were getting into, and it took a month or so for him to get settled in, but he is actually a great cat and we are really happy to have him! Renamed Martini (Tini for short), he is our largest cat and could easily be the Alpha cat. However, he usually keeps his distance from the other cats, and does get along with them all. He is very bonded with his new mom, but he is not a lap cat, at least not yet!” 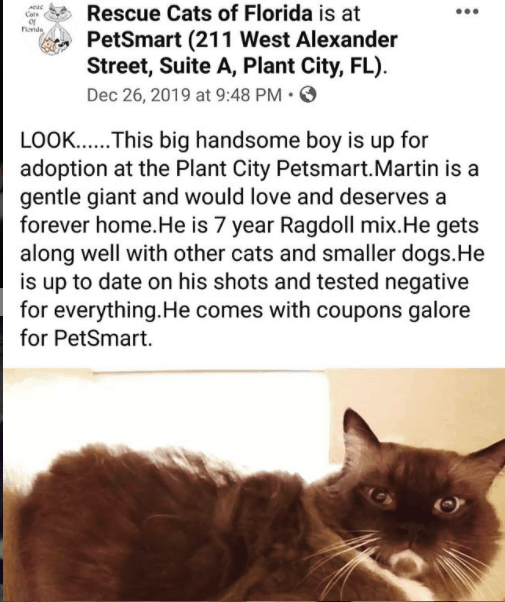 “Martini is the reason I started the IG account and named it after him, @martini_the_ragdoll_cat. His foster mom suggested it, since he has such a unique ‘frown.’ I always wanted to have a social media account for my cats, but until we adopted Martini I didn’t think it would be very interesting to others. I started posting a picture every day, and pretty soon it became a daily habit. I want my posts to bring pleasure to others, especially during this stressful pandemic.  I really enjoy doing it, and making friends with other the cat accounts in the IG community! Rescued cats are the best!!” 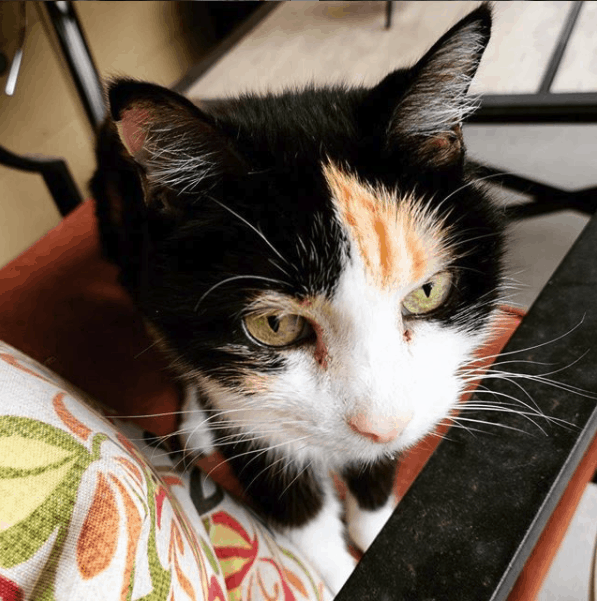 Owned for 15 years, adopted from the SPCA.

Favorite activity: hanging out on the catio. 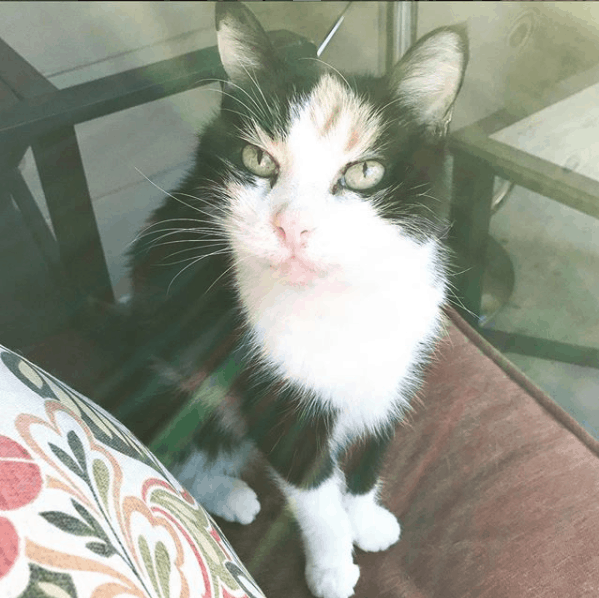 “Sandy is the smallest and the oldest, but she still has that Calico ‘cattitude.’ She is the smartest, likes jumping up in high places, is a lap cat and purrs loudly. She is not a big fan of the other cats because they sometimes chase after her, but she normally gets along with them.” 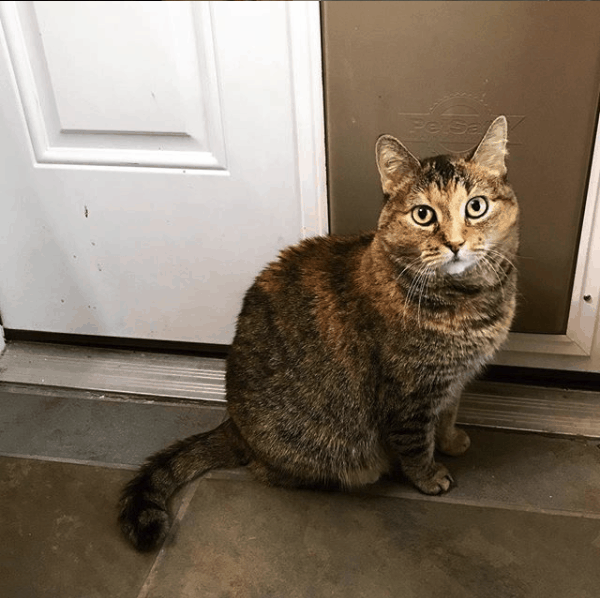 Owned for 9 years, adopted from the SPCA. 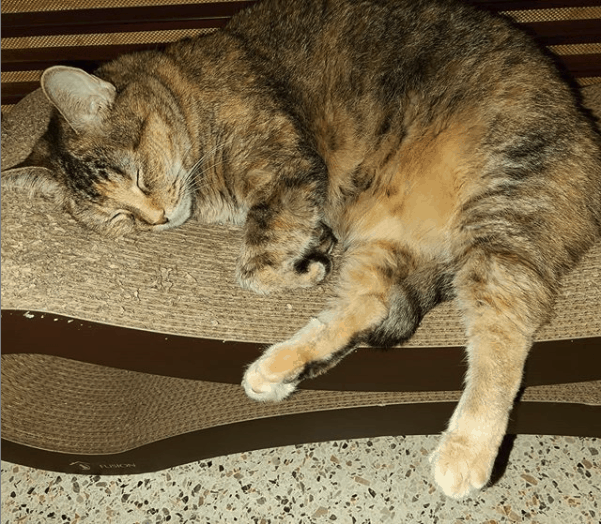 “Mia was adopted as a friend for Sandy after a prior cat (Boots) passed away. Unfortunately Mia and Sandy did not get along very well. Mia is not a large cat, but she is the Alpha cat. She has a somewhat aloof ‘cattitude’, and prefers to be scratched rather than pet. She has her routine, loves to sleep at the top of the cat tree, and gets along best with Coco. Almost every time I point the camera at Mia, she turns her head or runs away, so that’s why there are relatively few pictures of Mia on the IG account.” 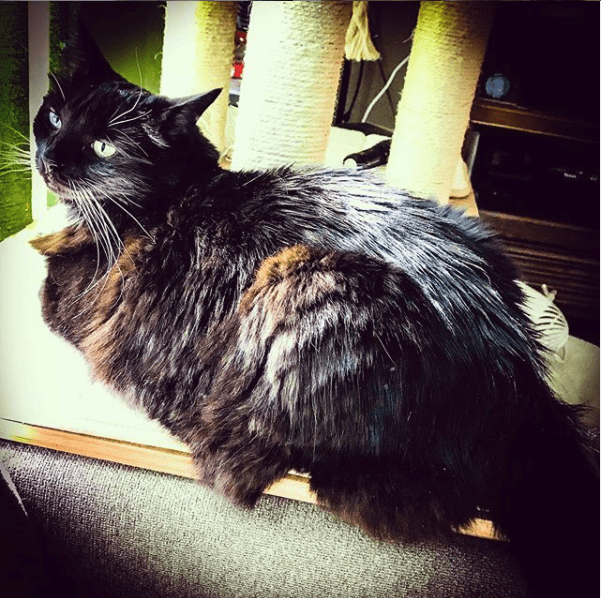 Owned for 9 years, adopted on impulse from PetSmart when shopping for cat food.

Favorite activity: Lying next to her Daddy on the sofa. 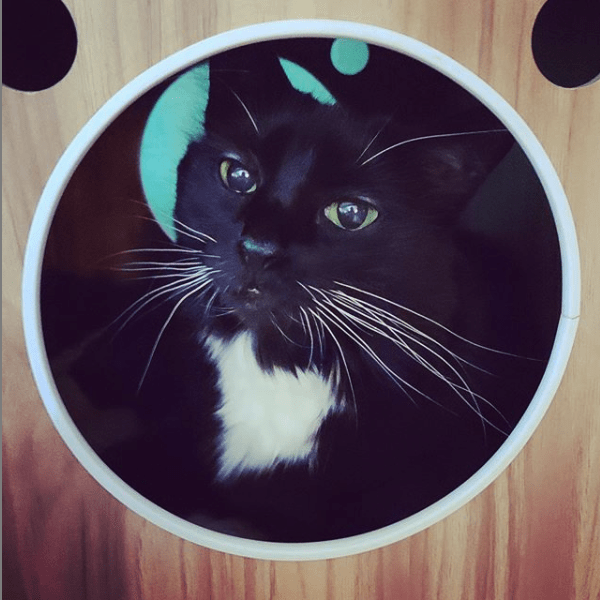 “Coco is Daddy’s girl, and she is the most friendly and outgoing of the cats. If another cat is misbehaving, she will sometimes run over and bop him/her on the head. She has very glossy, bunny soft fur, and a white tip at the end of her tail, which is what attracted our attention at PetSmart. She gets along well with the other cats, except for Luna.” 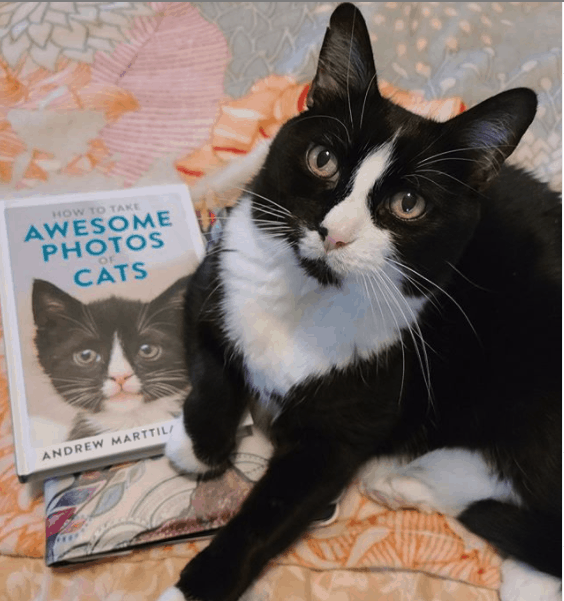 Owned for 8 years, found as a stray kitten. 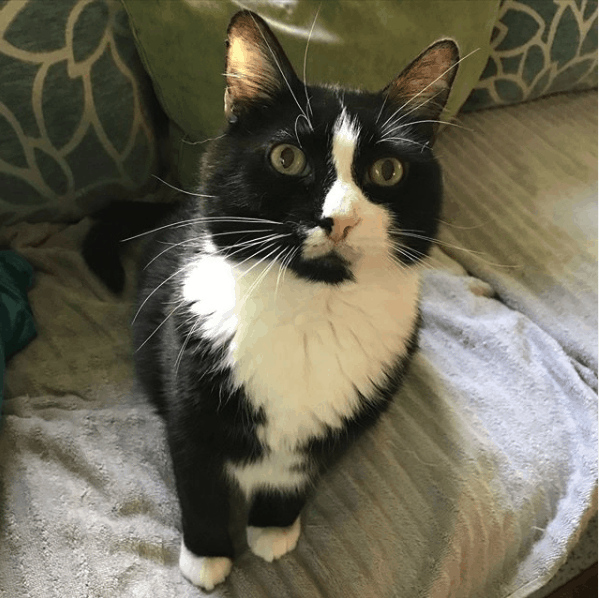 “Socks was a starving abandoned kitten in our neighborhood. When we saw him outside trying to eat a peanut left out for the squirrels, we knew we had to help him! It took a few months of feeding him before we could get close enough to finally catch him and take him to the vet. He is still a shy ‘scaredy cat’ but he’s a love bug and really appreciates being a part of the family. He gets along well with all the other cats and is happy to no longer be the only male cat.”

Favorite activity: Getting attention and being pet. 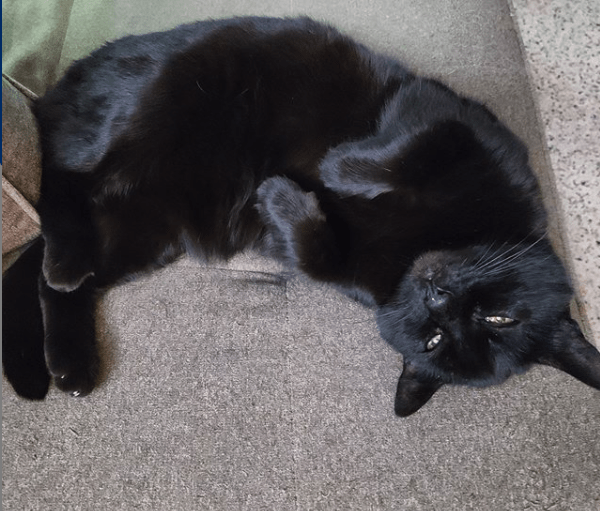 “Luna ‘ran away’ from her former owners across the street, and lived in our front yard until we took her in. She is a small cat, very sweet, likes to play, meows a lot including mimicking the other cats’ meows, and loves attention. Luna rarely sits still, so it’s difficult to get a good picture of her for the IG account.” (She still looks adorable either way if you ask me!) 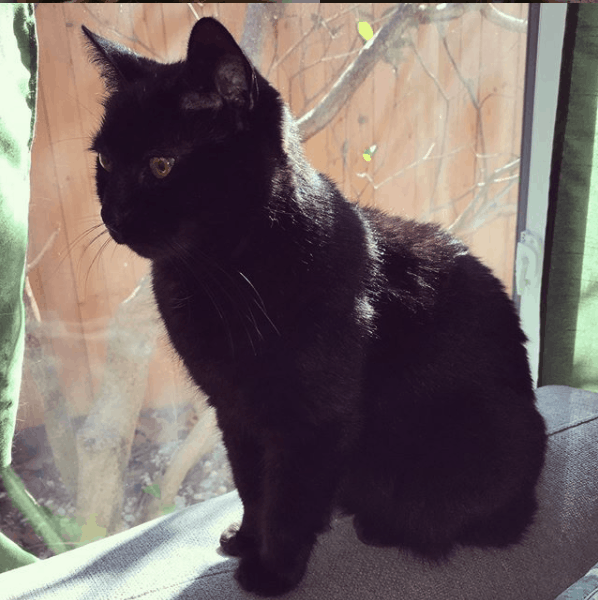 Can’t get enough of Martini and his cool cat housemates? Me neither! Keep up with their adorable antics on Instagram by following them here. I’d like to give a special “thank you” to Kristine for allowing me to share their precious photos and stories with all the amazing Cattitude Daily readers.