In Spruce Pine, North Carolina, there’s a tuxedo cat named Perdita that’s made a name for herself overnight. The Mitchell County Animal Rescue does a wonderful job at finding forever homes for dogs and cats. At first, they assumed that Perdita was under the weather, or possibly hiding an ailment. We know that cats are stoic beings and not ones to express their pain. But, as it turns out, the black and white cat was just being, well, a cat with ultimate cattitude. It comes as no surprise to me that Perdita is sassy and then some, because many of us know that tuxedo cats are not shy about putting their cattitude on full display. Once the the Mitchell County Animal Rescue decided to feature Perdita as the “World’s Worst Cat Up For Adoption” that was all it took for the world to instantly take notice. 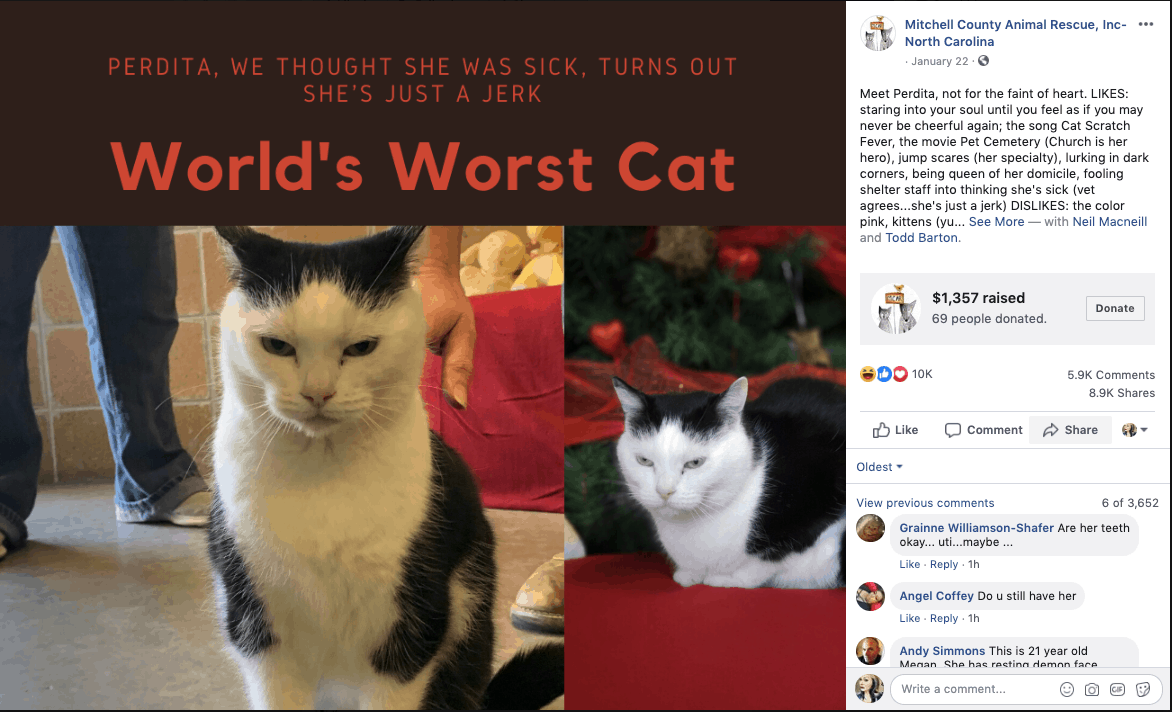 Meet Perdita, not for the faint of heart. LIKES: staring into your soul until you feel as if you may never be cheerful again; the song Cat Scratch Fever, the movie Pet Cemetery (Church is her hero), jump scares (her specialty), lurking in dark corners, being queen of her domicile, fooling shelter staff into thinking she’s sick (vet agrees…she’s just a jerk) DISLIKES: the color pink, kittens (yuk they are so chipper), dogs, children, the Dixie Chicks, Disney movies, Christmas and last but NOT least…HUGS. She’s single and ready to be socially awkward with a socially awkward human who understands personal space. FREE ADOPTION

😉
If interested please go to www.mitchellcountyanimalrescue.org to fill out an application 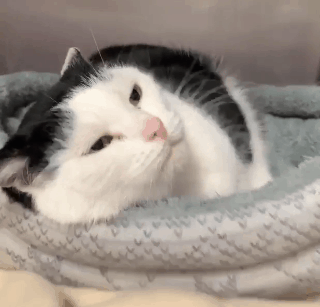 Within days, hundreds of adoption applications poured in for Perdita. And even better, ARM & HAMMER™ even offered to set up Perdita’s soon-to-be cat parents with free kitty litter for an entire year!

According to the Charlotte Observer, Perdita is estimated to be 4 years of age and first came into the shelter on Christmas Eve 2019. Sadly, county officials learned a person had died and there were multiple pets left inside the home at the time of death. Hopefully Perdita won’t wear the crown for “World’s Worst Cat” for long. Here’s to hoping that after she settles into her new home and new life that she’ll revel her sweeter side.

As you can see, the “World’s Worst Cat” is very particular about her beauty sleep not being interrupted…

The shelter life is no life for a cat, and Perdita is likely confused and afraid given the circumstances. I’m glad that a little humor could be used to get this cat the attention she deserves. I know deep down there’s a sweet girl in there hiding underneath that bad bitch exterior.

Mitchell County Animal Rescue’s mission is to protect, rescue, and care for abandoned and unwanted animals; to promote the importance of spay/neuter in reducing the population of stray animals, to place animals in loving homes; and to educate young people in humane treatment of animals. To learn more about the amazing work they do, visit their website here.

Love tuxedo cats? Find out more about them here in my article dedicated to the fanciest felines of the cat world.