For any cat owner, our greatest fear is the thought of losing our cats. Indoor cats that go missing are often unfamiliar with the surroundings outside of their homes, and we know that cats are often terrified of loud, strange noises and unfamiliar environments.

For Tiger, a brown tabby out of New York state, she exited her home when she was around three years of age after a door was accidentally left open. Although an accident, the family desperately wished to be reunited with their beloved kitty, searching tirelessly for months. Sadly, there search didn’t reunite them with their lost kitty. But Tiger’s cat mom, Maggie Welz, refused to give up on her missing feline.

“We were heartbroken and we ended up a year later moving to another house about 10 houses from that house and we told those owners to keep an eye out for him but he never returned,” says Maggie Welz, Tiger’s owner.

But it seems that Tiger wasn’t actually too far away from the home she once knew. And thanks to one dedicated lover of animals and staff member at the local SPCA, Tiger was picked up and given her happy ending—even though over a decade has passed!

Watch this happy reunion for yourself of the lost cat who got her finally happy ending!

“Each year he came to my house, he deteriorated more and more each year, and that’s when I realized either somebody just abandoned him or he just was missing or lost or he was just a feral cat…This spring he started to come around a little bit more in the mornings so I started to work harder to gain his trust.” — Carol O’Connell

Here is the original post that was shared by the Dutchess County SPCA, congratulating Carol O’Connell for her incredible act of kindness that made this happy reunion possible…

The happy reunion images are so sweet! You can clearly see how much Tiger meant to his human mom who missed him dearly, and the look of immense gratitude in Maggie’s eyes as she and Tiger’s rescuer embraced. Welz says that she is forever indebted to O’Connell for finding her lost cat, who is surprisingly in “remarkably good shape for having been on the streets that long” veterinarians say.

“I can’t tell them how grateful I am to them for their persistence and their dedication and for making sure that our cat was okay… I have no idea where he was for the years in between, I’m sure he could tell us many tales, but the thing is that he is now home with us and he will be with us for the remainder of his life.” 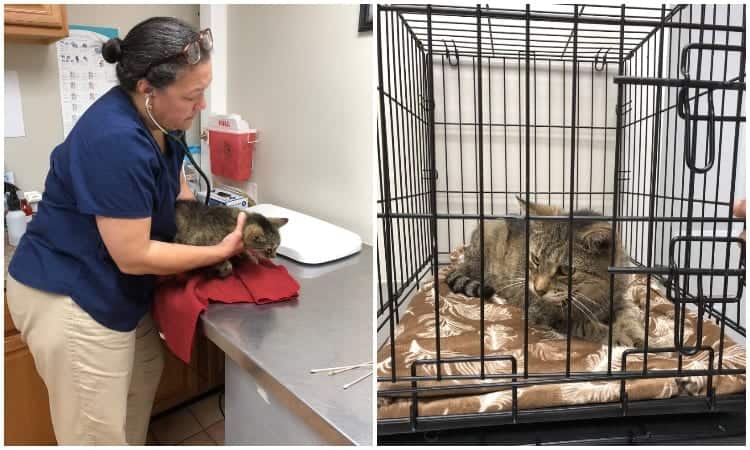 Hopefully this happy reunion can give you hope if you’ve ever lost a kitty, because sometimes life has some pretty purrfect surprises in store. Here’s to wishing Tiger and the humans who never stopped loving him many more years together. And remember, ALWAYS have your cat microchipped!

cats in the news
0
FacebookTwitterPinterestEmail

Study Claims All Cats Have One Of These Specific Personality Types