All cats are beautiful, but there is something especially beautiful about Ragdoll cats. The Ragdoll cat is one of the fluffiest of all cat breeds, and these gentle giants of the cat world are loved for their sweet dog-like personality. This is a cat which makes an ideal family kitty, and there is so much to love about them. Want to learn more about Ragdoll cats? Just keep reading! 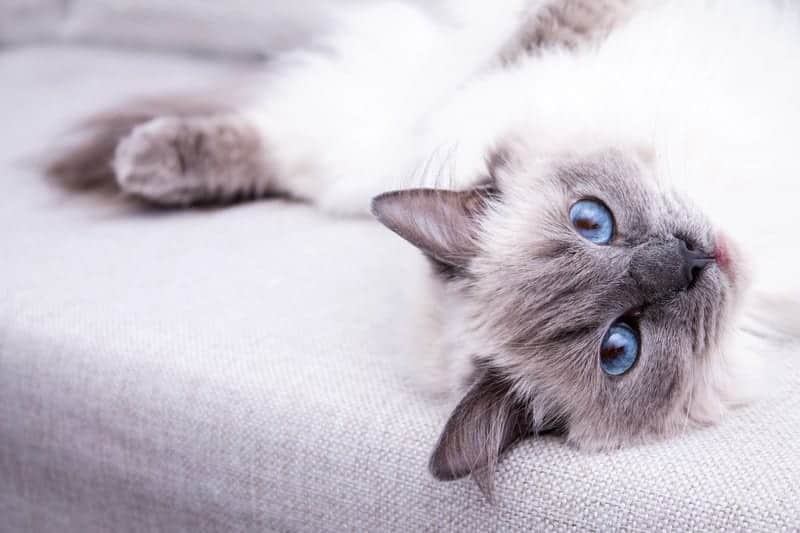 What’s in a Name?

If you’ve ever wondered why on earth it is that we call this fluffy breed of cat a Ragdoll, well, then you’ve never held one before! This breed of cat got its name for their tendency to go limp when you hold them. The Ragdoll cat is such a laid-back breed that they don’t mind being carried around or held—like you would an actual rag doll. These are cats that love attention and affection so much, they simply go limp when they are cradled happily in your loving arms.

Ann Baker is credited as the creator of the Ragdoll cat breed, with her cat named Josephine officially known as the OG Ragdoll cat. 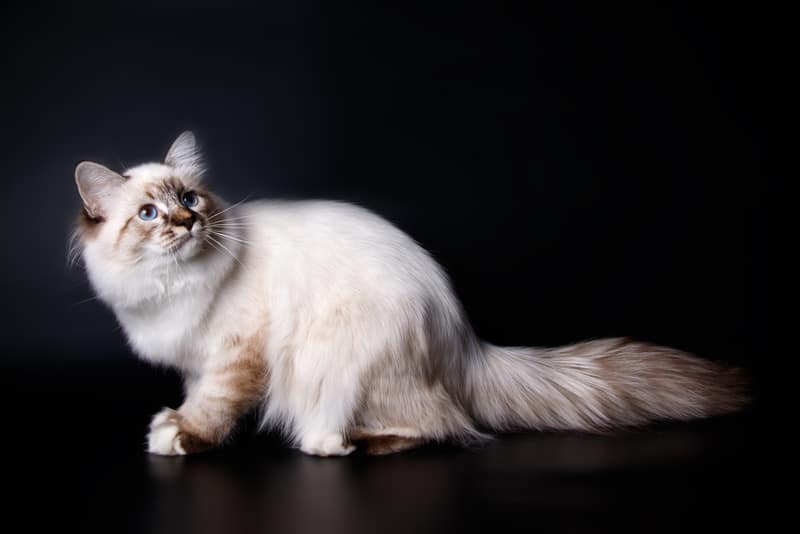 Every ragdoll cat that’s came into the world since is a descendant of Josephine, a pretty white cat that was named this for her sweet and gentle disposition. The very first ragdoll cat, Josephine, was born in Riverside, California in 1963.

These cats are soft-spoken, and not like a Siamese cat that demands to make their presence known. They are gentle and loving, and they don’t feel the need to meow loudly with a desire to be heard. But keep in mind, each cat is an individual. And although they might be a true Ragdoll cat, they can possibly defy their namesake with a displeasure of being held. 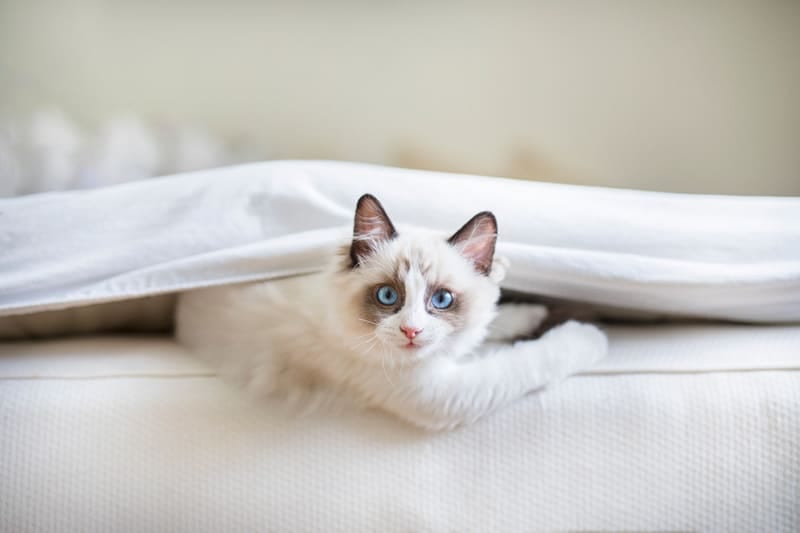 Many Ragdolls Are Mitten Kittens

We know that cats of many colors often have white sock patterns on their coats. But for Ragdoll cats, this is an official look of the breed. Their white mittens add a nice touch to the other white markings on their large and fluffy bodies. And although these cats have lots of fluff, they shed much less than you would think.

Ragdolls come in several patterns, including colorpoint (no white on their coat), bicolor, and mitted. These cats come in a wide variety of shades, such as cream, chocolate, or even lilac. (For a full chart of colors, click here.) Often times, their faces look as if they are wearing a white mask. Some Ragdolls will even have faint tabby cat markings on their coats.

Fun Ragdoll cat facts: all purebred Ragdoll kittens are born pure white. By their first birthday, they develop their signature points and markings. 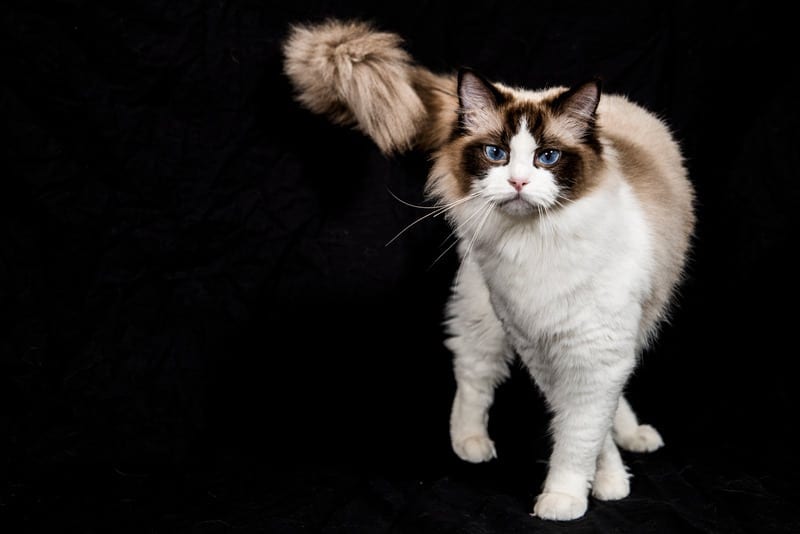 Ragdolls Are Large And Lovely

The Ragdoll cat is a beautiful blend of the Himalayan, Burmese, and Persian cat breed. And like the Maine Coons, the Ragdoll cat is a large breed with females weighing in around fifteen pounds, and males up to twenty pounds or more. All that fluff on this cat breed isn’t deceiving, they are just as heavy when you pick them up. Which is a lot when it comes to dead weight of a twenty pound cat!

And, like the Maine Coon which matures later than the average cat, a pure Ragdoll cat is not fully grown until they are roughly four years of age. And although they are larger in size, this breed of cat has a longer than average lifespan of 15-20 years.

Interesting Ragdoll cat fact: many Ragdoll cat owners report that their kitties love the sound of running water. They are particularly drawn to faucets and bathtubs. 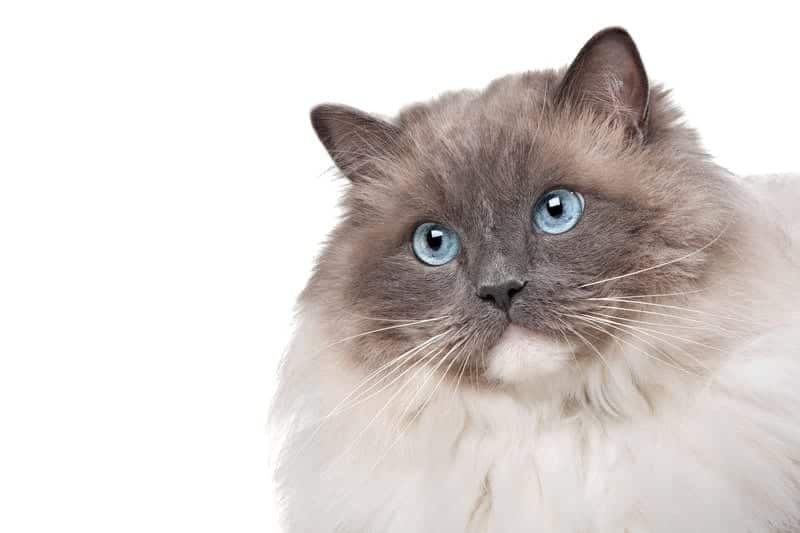 What Blue Eyes You Have!

One of the most distinct characteristics of the appearance of the Ragdoll is their big and beautiful blue eyes. But depending on the coat pattern, some Ragdoll cats can have gold or blue-green eyes, too. If you have a Ragdoll which doesn’t have the classic blue eyes, then they are likely mixed with another breed of cat.

Did you enjoy this collection of fun facts? Share this article with other cat lovers so they can learn more about the Ragdoll cat breed. 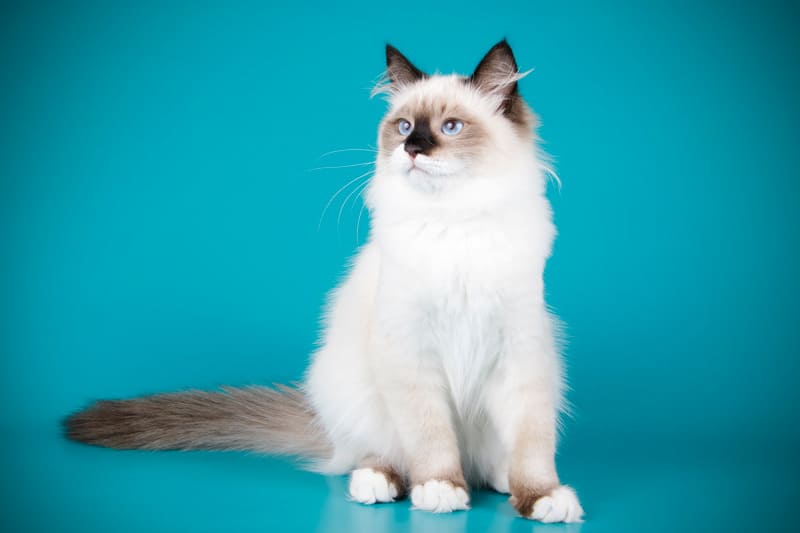 Meet Luna: A Gorgeous Rescue Ragdoll Mix With Eyes Like The Sea