For many cats which have black coats, they will often have white on their coats, too. Obviously cat coat genetics plays a role in this. Additionally, many cats which have black coats will also look as if they’re wearing socks. These socks are relatively common on cats with mostly black coats, too. That’s why you often see our tuxedo cats having them. But remember, tabbies can have them, too, it’s just not as common as it is with black cats. 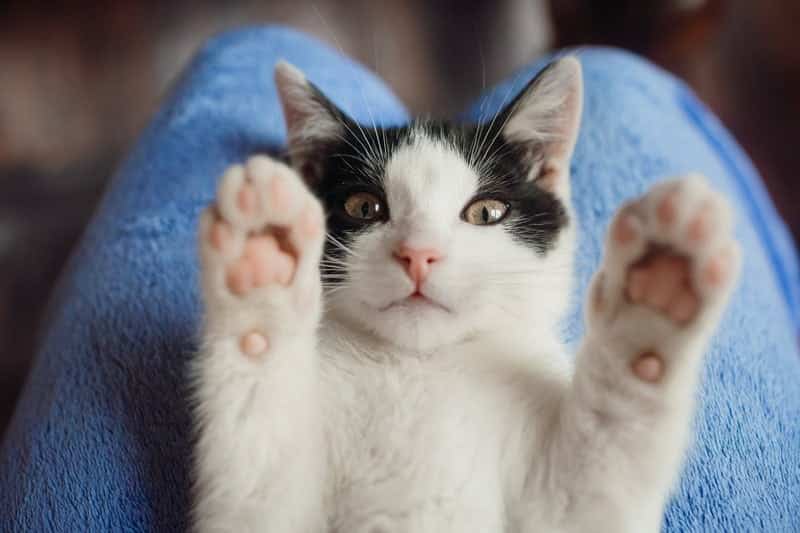 And, in case you didn’t know, black is the most common coat color in cats. Live Science explains this interesting socks phenomenon in detail. But in short, these socks tend to appear when the tamest species are selected and bred. So, genetics, domestication, and a sprinkle of randomness is what causes this.  You can also find these cute “socks” in horses, pigs, mice, rats, and cows, too. 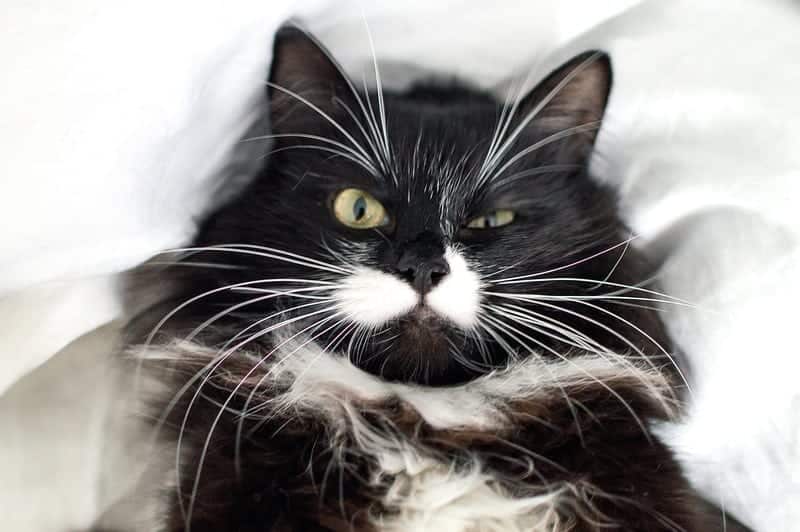 The Kings of Cattitude: Tuxedo Cats

In case you didn’t know this term about these naturally fancy felines of the cat world, a tuxedo cat is a black and white cat with markings that make them appear as if they’re permanently donning formal attire. But, keep in mind, not all black and white cats are true tuxedo cats. Additionally, cats who aren’t black can also be tuxedo cats, too. For example, there are gray tuxedo cats and even tabby tuxedo cats. Depending on the markings that the cat has, their feet and belly will be predominately white, and the white will travel up the neck and often leave a mask marking on the face of the cat. If you’re still not sure exactly what a proper tuxedo cat is, just take a look at Pepper, a purrfect tuxedo cat in true form below. 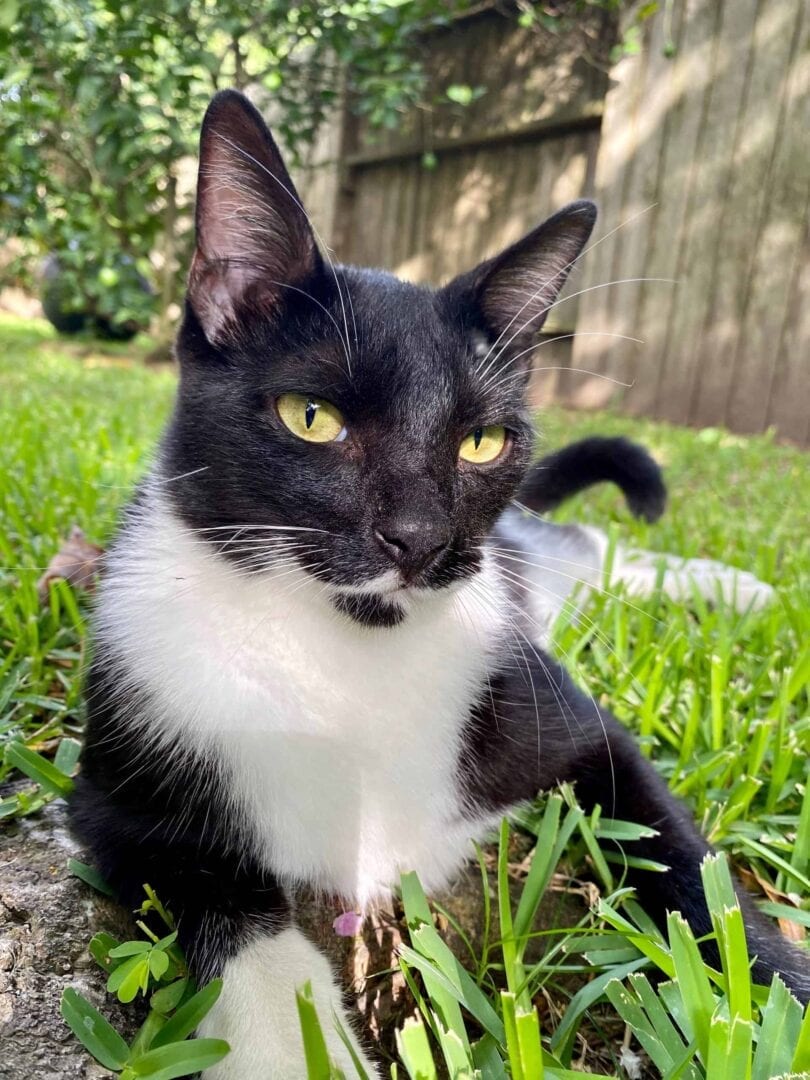 Want to learn even more about tuxedo cats? Check out my article on CattitudeDaily dedicated to these fancy felines of the cat world. And if you own one of these fancy felines, then you probably already know that they’re truly one of a kind in terms of personality. I can say for myself with Pepper, my first tuxedo cat, he is unlike any cat I’ve ever had or met in my life. Tuxedo cats are in a class all their own! And the coolest part about these cats is that so many cat breeds have tuxedo cats. From Maine Coons to Oriental Shorthairs, and your everyday domesticated shorthair cat, tuxedos can be found in several breeds of cats. There has been much debate as to whether a cat’s coat is directly linked to their personality from a scientific standpoint. But, research has found when polling a large group of cat owners that black and white cats, specifically tuxedo cats, were mostly likely to have cattitude. No surprise there! 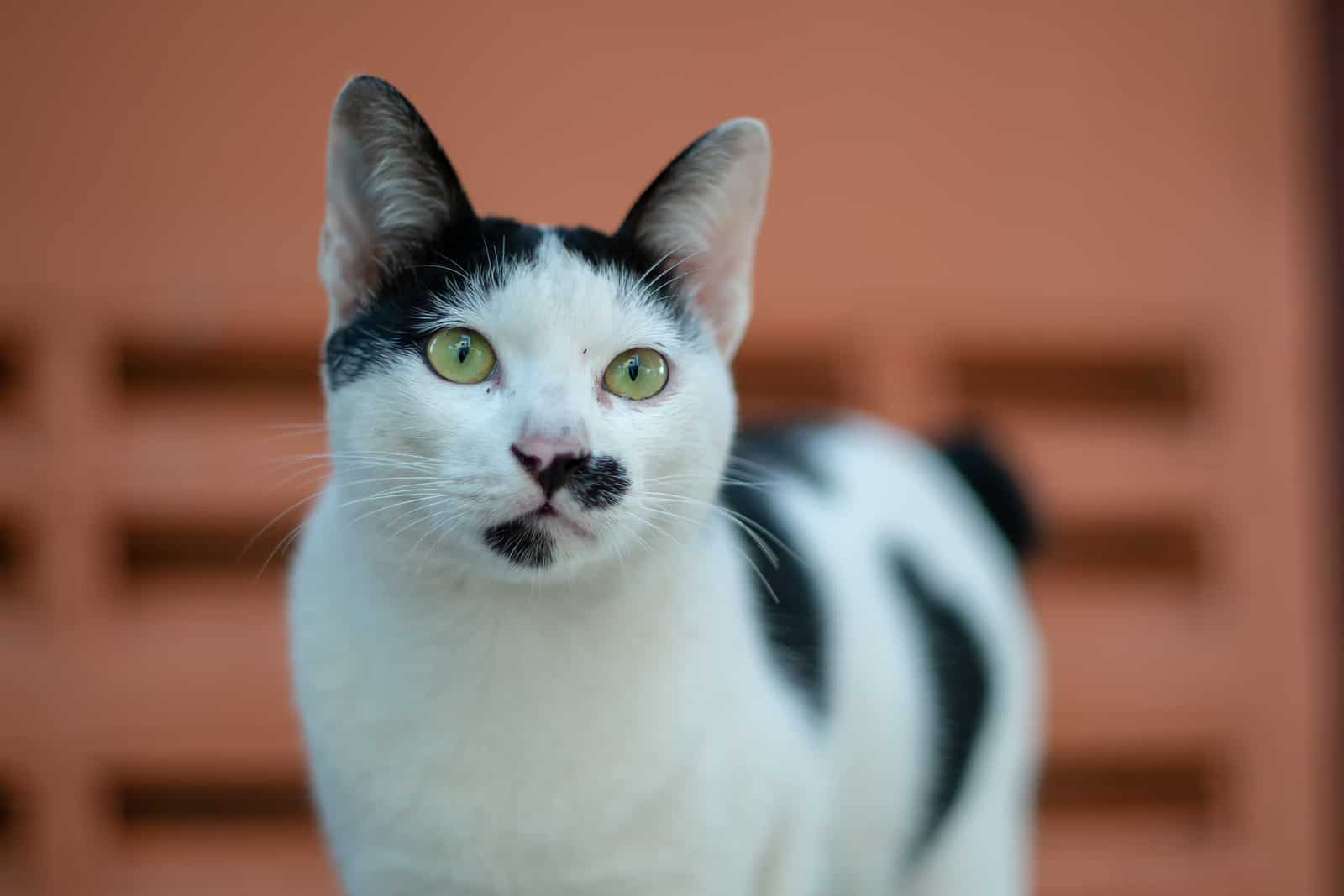 I don’t know about you, but I think cow cats are just super, duper fun to look at. These cool black and white cats get their name from their spotted coat which resembles that of a dairy cow’s coat. Have you ever seen a Harlequin Great Dane before? Their coat is somewhat similar in appearance, too. Coat genetics are an amazing thing. And while our feline’s big cat cousins will have spots, it’s rare to see a cat with spots. (And you’ll never see a wildcat with socks, either! ) For our domesticated felines, typically it is stripes or patches that you’ll see. The distinctive markings that are unique to each cat begin while the cat is still an embryo. 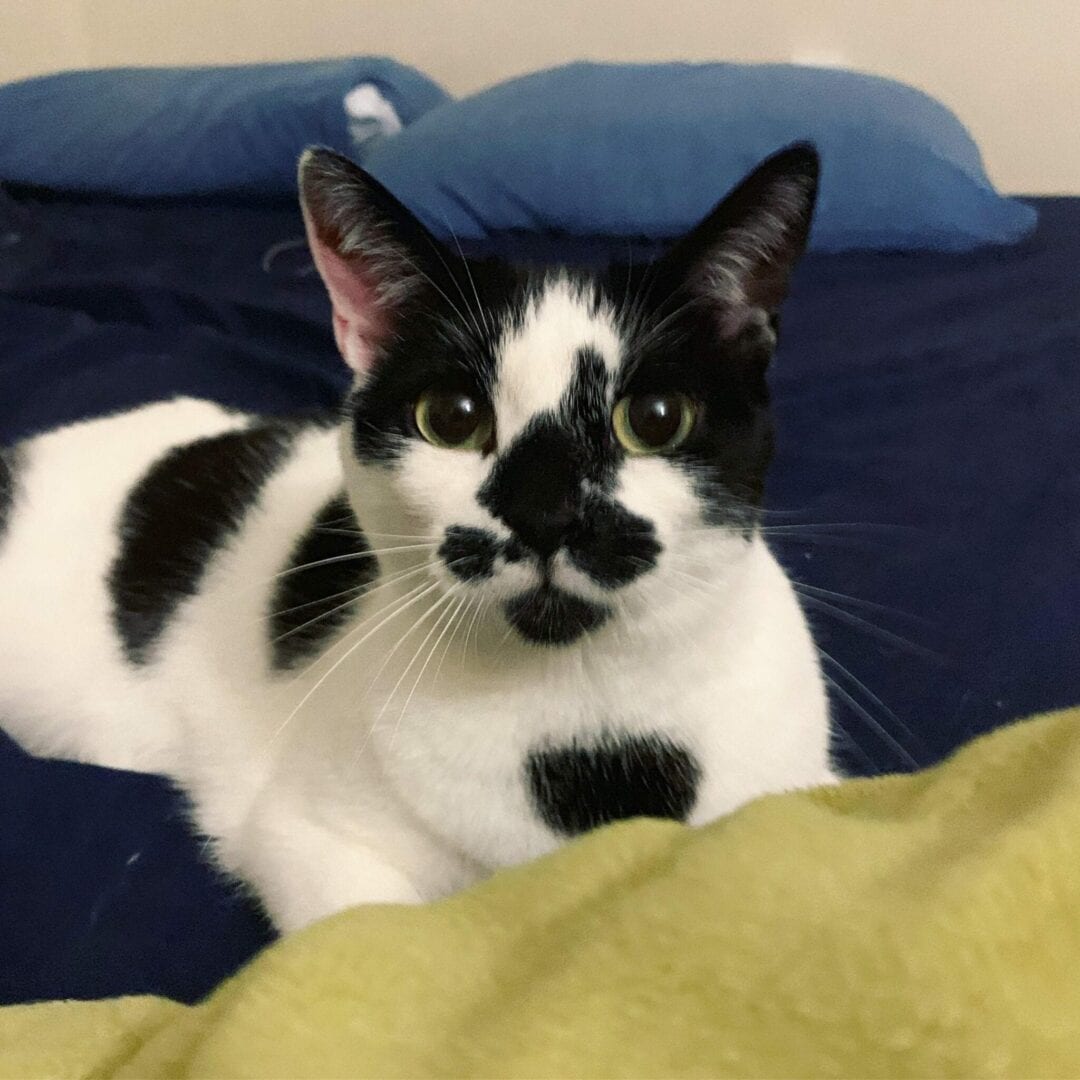 When it comes to cats, the possibilities of pigmentation are truly endless. And while many cats will have the white markings in specific regions of their body, some cats, like cow cats, will have the genes that control white coat markings travel further all across their body. These cats are mostly white with accents of black. Because of their intriguing spots, cow cats are a favorite among many cat lovers. 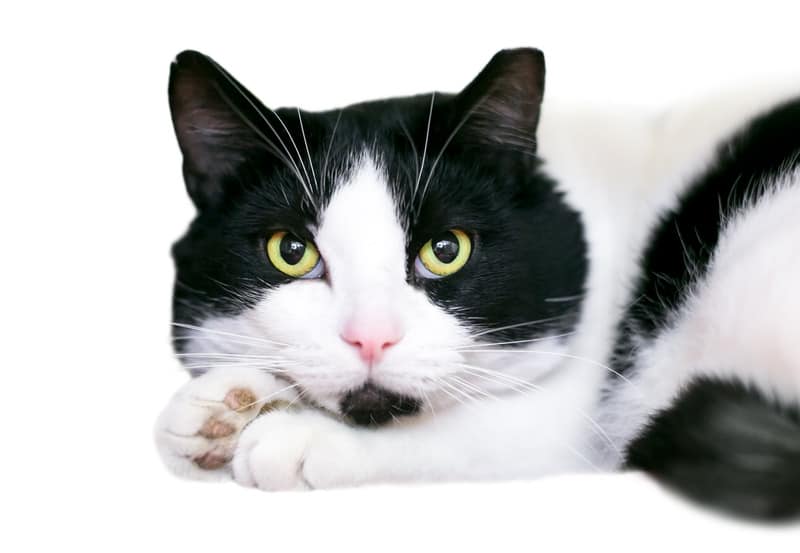 So, when it comes to piebaldism, cats are not the only animals that experience this interesting bicolor pattern. With bicolor cats, they are not considered true tuxedo cats because their coats don’t have the formal wear appearance. Dr. Karen Becker of Mercola Healthy Pets explains that piebald patches are the result of an entirely random process. And, as I mentioned above, cats aren’t the only ones to experience this dual pattern phenomenon. You can also find snakes, horses, birds, and dogs which have piebald patterns on their skin/coat. If you look closely underneath your black and white cat’s fur, the fur which is white will not be pigmented; the fur which is dark will have pigmented skin.

The Turkish Van is considered a piebald. And their pattern is truly unique to their breed, as featured below. Notice the black only on the tail and the head. The Turkish Van can also come in orange and white with the same specific markings. 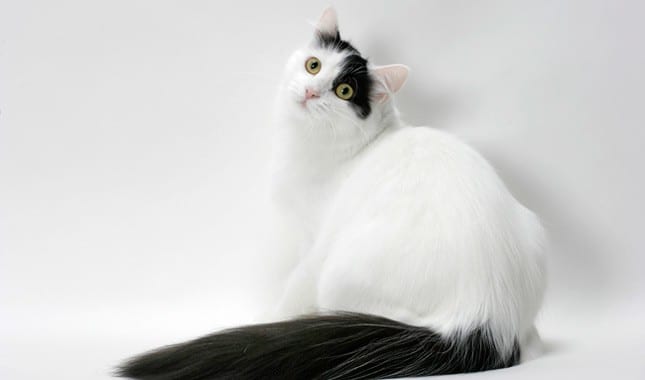 Did you learn anything new and interesting about our feline friends? Don’t forget to share this article with other cat lovers so that they can learn something, too!

Want to read about the rarest cat coats and patterns for felines? Check out them out here on CattitudeDaily.com. 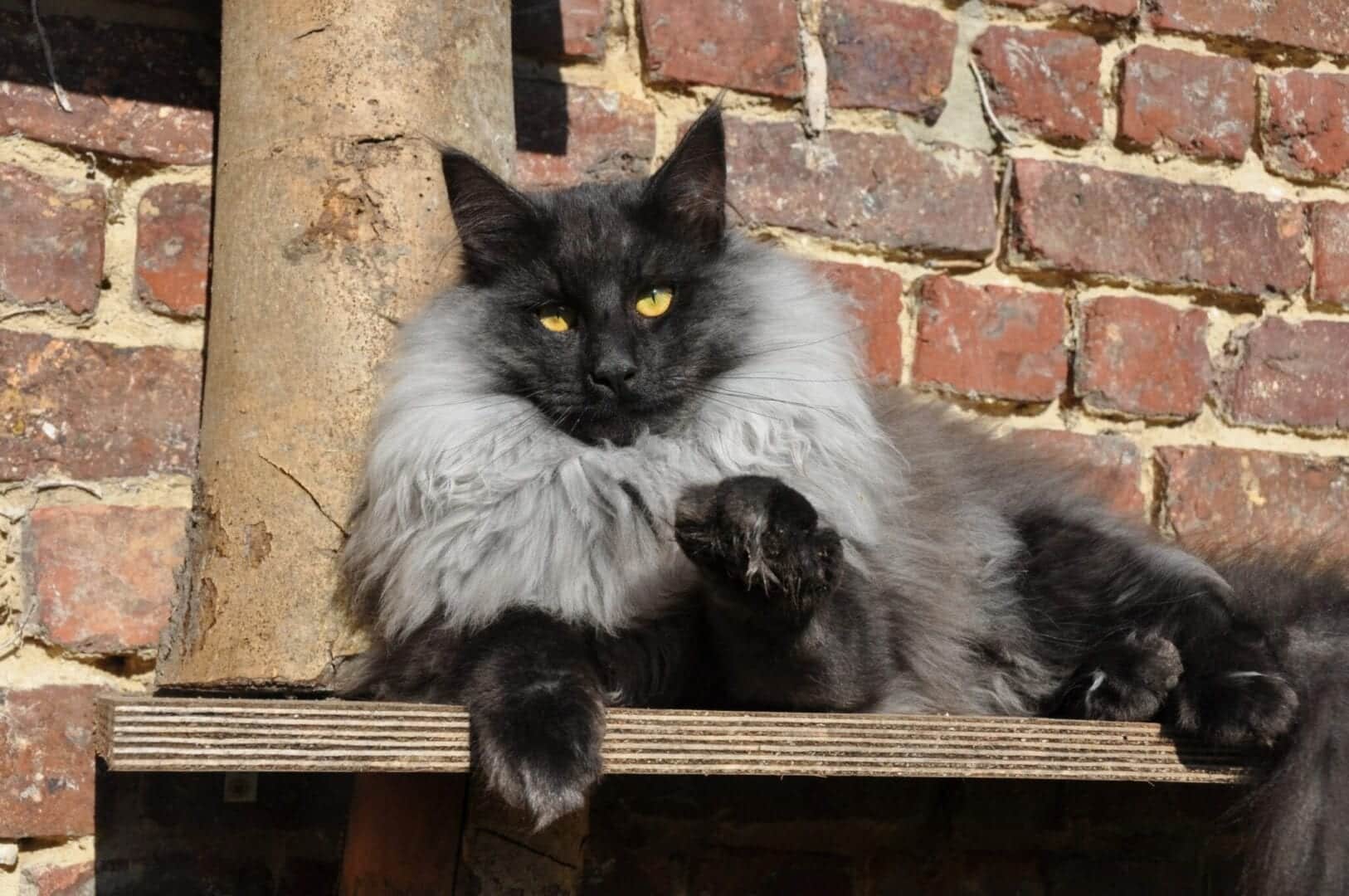