The street life is no life for a cat. It’s rough, unpredictable, and if you’re a cat living on the streets of Moscow, Russia, it’s extremely cold several months out of the year, too. For a ginger tabby appropriately named Ginger, AKA Ginger the Hooligan, he found his way to a forever home with his cat mom, Elena, in December of 2019. The adjustment of going from a lonely and skittish street cat to an adored and pampered house cat wasn’t easy. But Elena knows that the best medicine for any cat is patience, and with lots of it, Ginger has come out of his shell and learned to live life where he doesn’t have to worry anymore.

Everyone, meet Ginger, a precious ginger tabby with a name that suits him perfectly! 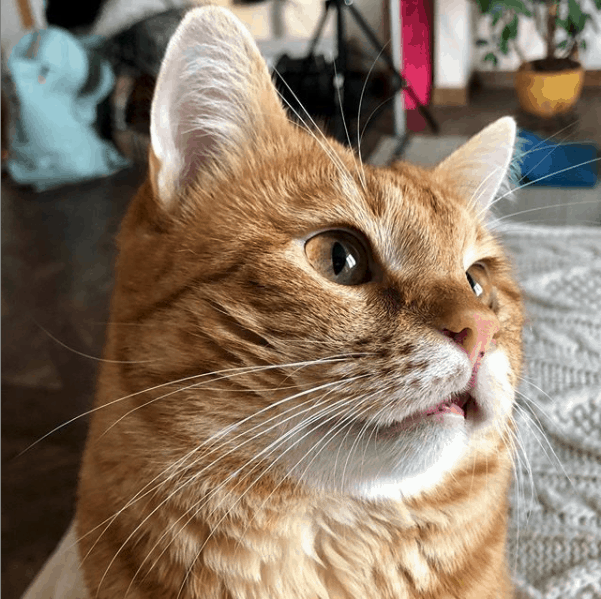 I caught up with Elena after seeing Ginger’s images online and falling head over orange cat lover heels for him. He has the sweetest little face, and I can’t imagine a kitty as beautiful as him ever having to live on the streets. Keep reading to learn more about Ginger the cat. Enjoy!

How did Ginger the Hooligan come into your life?

In December 2019, Ginger came to the parking area of the University where I work. He was cool, handsome and very smart. And absolutely wild. He was completely afraid of people. But the parking area is no place for a cat to call home. More so, he could not stay alone in the building for long Christmas holidays without regular meals and water. Add the risk of infection from the pesticides used to treat against rats and bugs, and that isn’t good for any cat to be exposed to. Although everybody had grown to love him, Ginger had to leave the territory.

It took us a total of two weeks to successfully catch the cat which we named Ginger. We had only one attempt. These street cats are extremely smart, and definitely don’t want to be caught. The security monitored his adventures via CCTV, and his fan club was growing. Ginger was resistant to all kinds of usual trapping attempts: he ignored the carrier, the food in the carrier, and so on. This Garfield played with us and waited for the last moment to get inside the carrier…And finally, at the last working day before the New Year, I closed the box, called a taxi and we went home. Poor Ginger was very, very frightened. 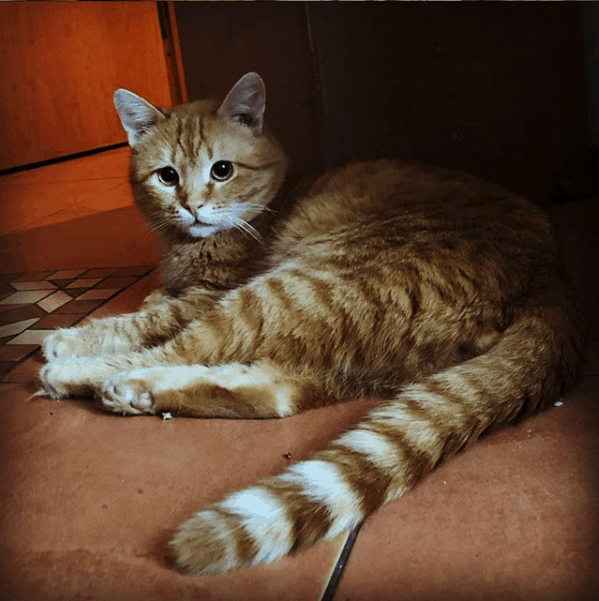 I am most certainly a cat lady. But in the process of domestication, I learned a thousand times more about cats than I ever had in the years before. The first thing the cat did was jump on the gas stove and hid behind the refrigerator. I have a built-in kitchen. I didn’t even think there would be a space for him to do that. Later, Ginger tried to rub himself against the hot iron, lick the wired socket and checked the hot oven. And once when jumping off my table he pulled the tablecloth right off with everything that was on it. Was I happy? Definitely not. Sometimes I didn’t know who was more scared – me or Ginger. He was not aggressive, but very scared. Which is understandable given his past life. He spent a month behind the washing machine. And then moved to the closet.

I soon realized that I made a huge mistake: we had to visit vet on the day when he came home. When he finally showed up and we got a chance to have a look at him, it turned out that there was no need to delay a visit to veterinarian. I received a long list of necessary medications. It was a huge stress for him, but he needed these medicines. He returned behind the washing machine and refused to eat. The situation became more difficult because of COVID lockdown: everything was closed, and people could not leave their homes. So, we stayed at home together. 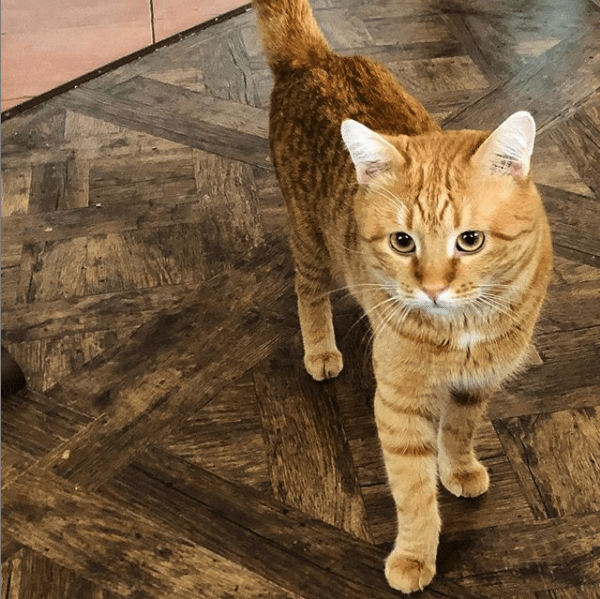 The vet gave me several tips to help ease him into his new indoor life with me, one of which was to try to accustom him to my voice. Thus, for the entire COVID period, I sat down before the closet where the cat was sitting … and we read Shakespeare. Aloud. We started with “A Midsummer Night’s Dream’, then the biography of his family, and all the rest. It helped. Finally, Ginger wanted to engage with me. I had earned his trust through our reading sessions together. In May of 2020, he asked to pet him for the first time. 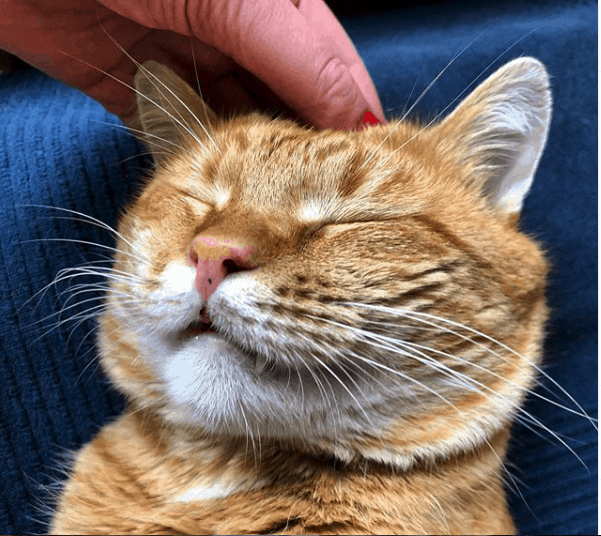 How has he adjusted to eating regular meals?

He was reluctant to eat at first, but now he has chosen his meals that he likes. He loves chicken with shrimp or vegetables. And he eats only when he wants to eat. (That’s a cat for you!)

Now he is the most affectionate, smart and kind cat. He is still afraid of other people, but it’s getting better now. 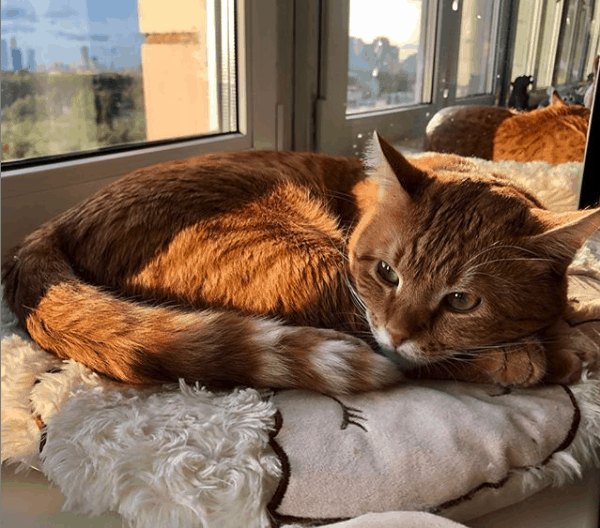 Does Ginger the Hooligan have any cat housemates?

Ginger does not have any other cat housemates. But I think that he loves other animals and, probably, one day he’ll bring a fur friend at home. At the moment he’s sitting with me, purring and sends you his orange love 😉

Can’t get enough of this orange cutie pie? Keep up with him on Instagram by following him here. I’d like to give a special “thank you” to Elena for allowing me to share Ginger’s images and story with you all, and I’m grateful for kind people like her who work so hard to give alley cats the second chance they deserve. You’re a hero in my book. 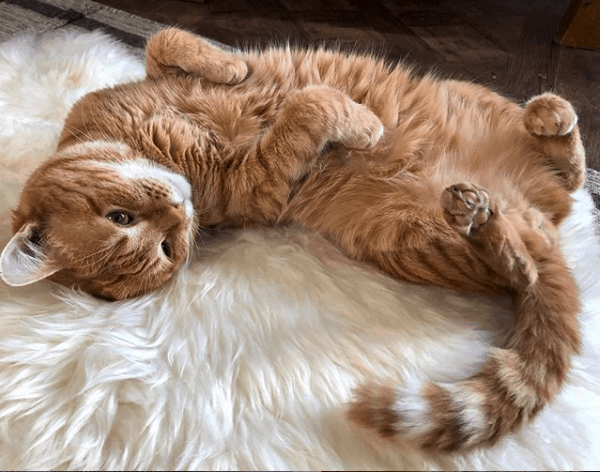 All Images Courtesy of Ginger the Hooligan on Instagram

Hairballs In Cats: What’s Normal And What’s Not