Home Cat News If You’ve Wondered Why A Lady Is Yelling At A Cat Eating A Salad, This Will Tell You
Cat NewsCatsCelebrity Cats

Several years ago, Taylor Armstrong of Beverly Hills Real Housewives fame was screaming at another real housewife in defense of allegations which she claims are true. When we lose someone in life, it is our word against theirs that sometimes goes to the grave. (Having lost both of my parents, I can attest this is 100% true.) 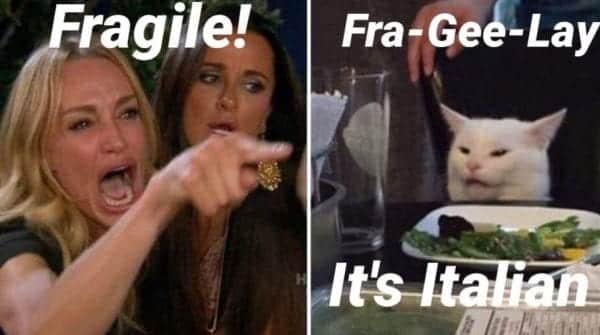 Enter a cat eating a salad, or as many cat lovers know him as, Smudge.

And, no offense to Taylor, but by social media standards, Smudge the “confused cat”—AKA Smudge Lord on Instagram—is like a lot more famous than this OG Real Housewife. Just how famous is this white cat? Well, 1.4 million Instagram users famous. (Taylor is roughly over 80k, in case anyone is curious.)

Not that all that matters, as being famous on social media is sort of like being rich in Monopoly. But the bottom line is that the white cat eating the salad, well, not eating the salad, actually, was famous in his own right long before someone got the idea to put him in a meme side by side with a screaming Taylor. 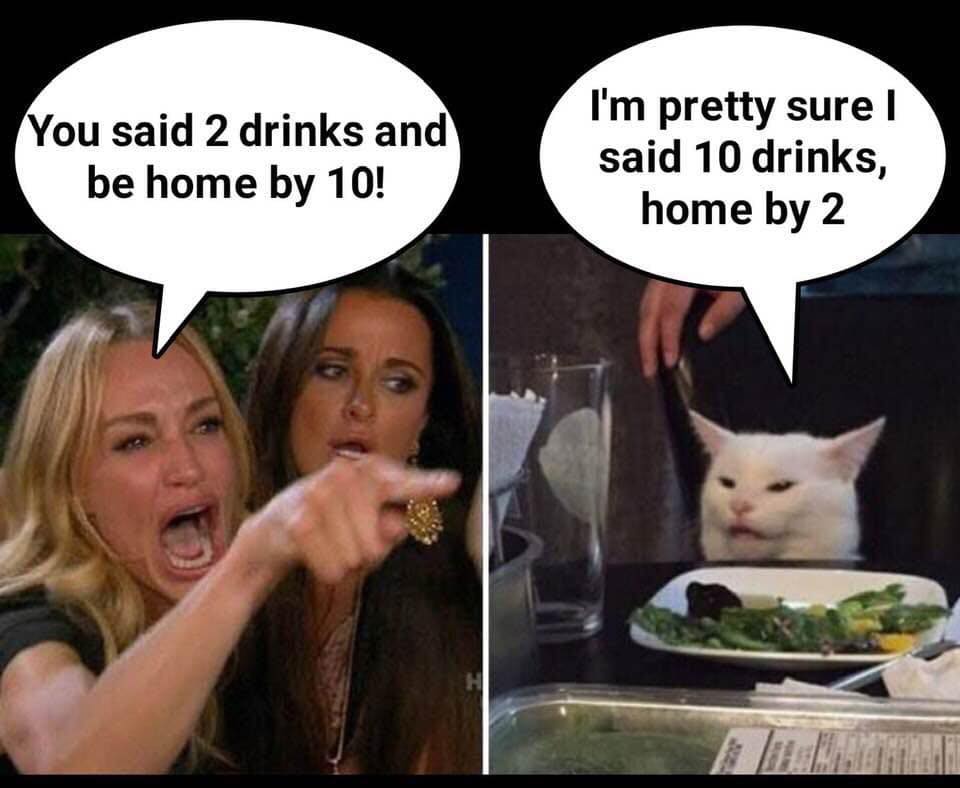 In May of this year, a Twitter user was the first to put the image of a yelling Taylor alongside Smudge in front of a plate of salad. She captioned the image by saying: “These photos together is making me lose it”

These photos together is making me lose it pic.twitter.com/kJi9d8MpbG

Then in August, the below image was shared to Reddit where it quickly was upvoted: 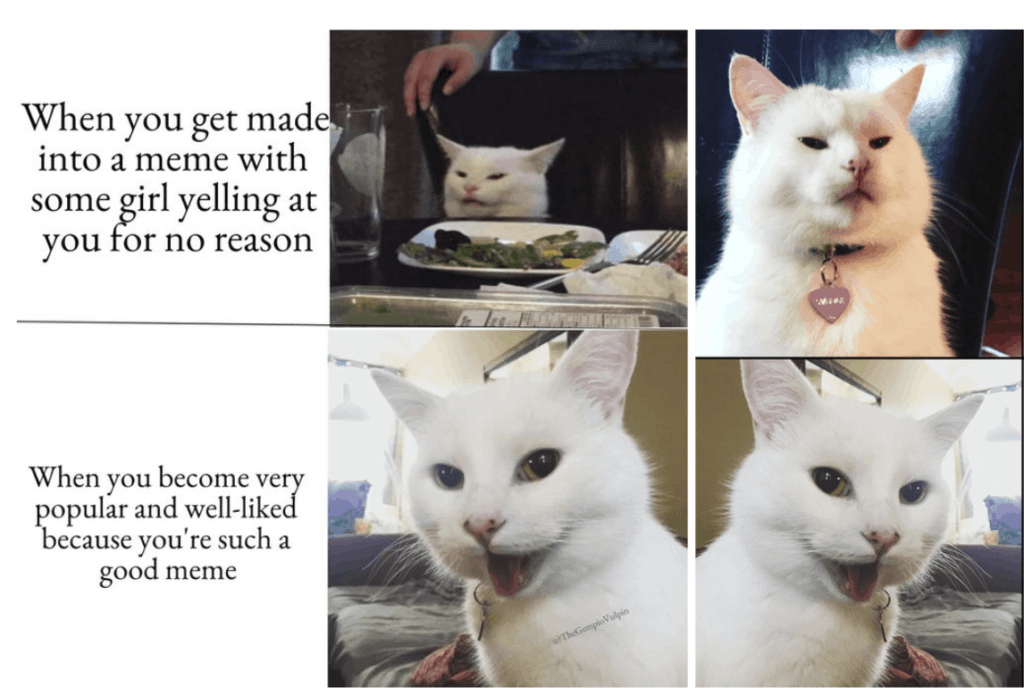 Since then, this side by image of the woman yelling at a cat has gone insanely viral.

It seems that everyone has wanted to make their own rendition of this meme, which has since been labeled as “the woman yelling at a cat” meme.

The image of the now infamous woman yelling was a scene from Season 2 of the Real Housewives of Beverly Hills. I’ve included a clip for you below, if you wanna hit the mark of the screen capture for the left half of the meme heard round the world, it’s at the 3:57 minute mark….

It seems that Smudge “The Table Cat” often finds himself at (you guessed it!) the table. At times he’s interested in the food on the table, and at other times, he’s completely unamused and vocal about it. Smudge found himself internet fame in 2018 when Tumblr user deadbeforedeath shared the now famous image of him posted up in front of a salad clearly objecting to. Smudge, as his owner says, “hates vegetables”—and clearly that’s a fact. 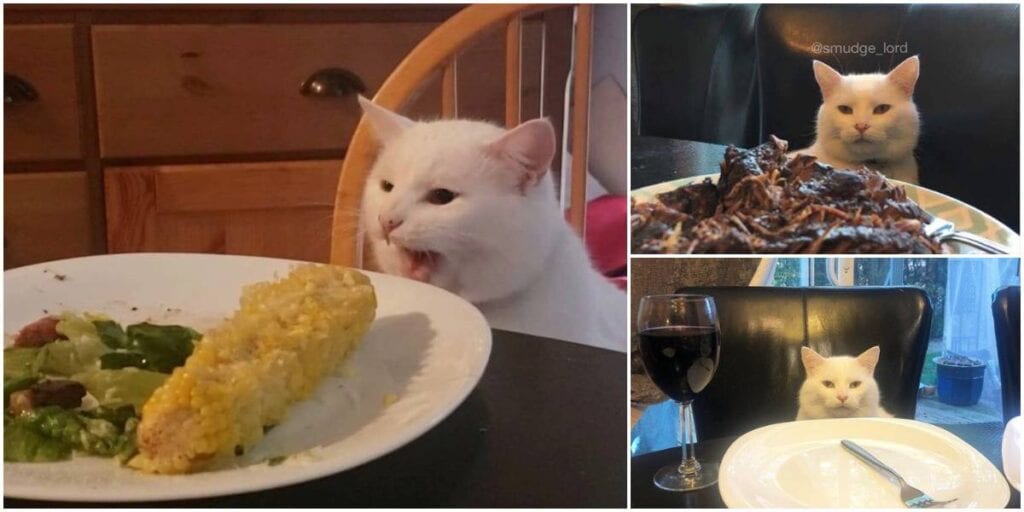 So, what does Taylor Armstrong think about all this?

Well, it seems that she’s not opposed to the memes that everyone can’t get enough of, and I personally commend her for being so positive about something that reflects such a low and negative point in her life. What many don’t know based on the above clip, is that Taylor was defending herself against previous allegations that her late husband actually didn’t domestically abuse her. And, as I said above, it is hard to argue fact when a person is no longer alive. 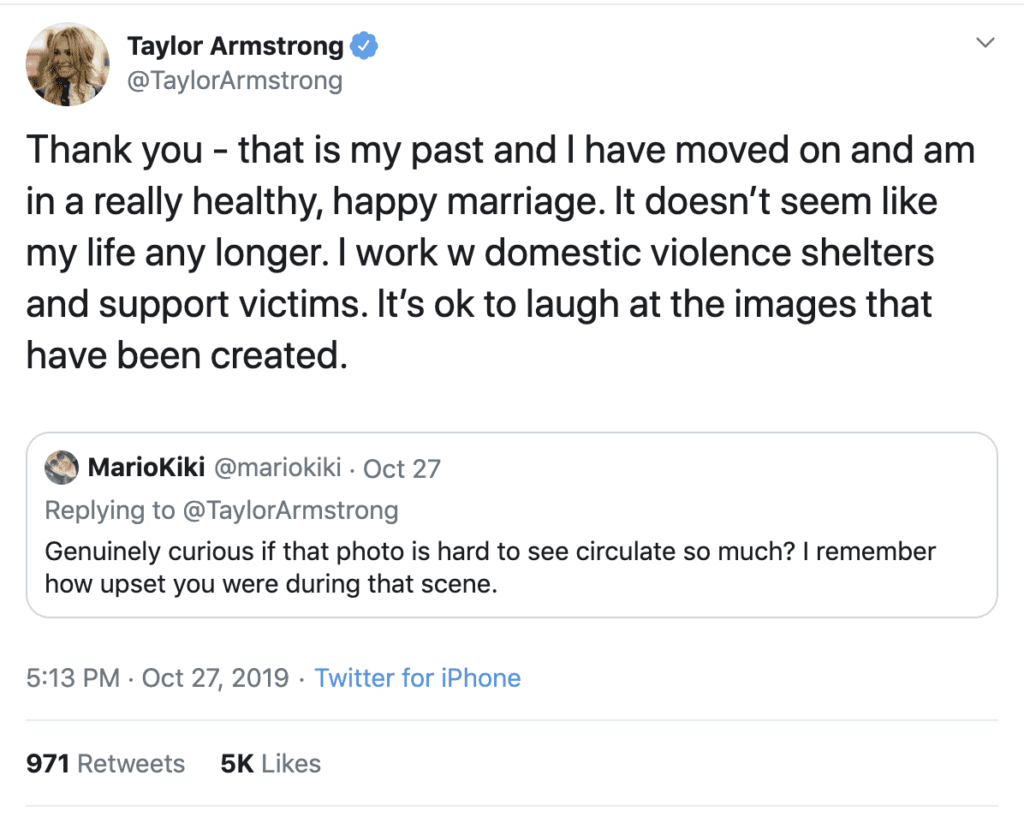 Oprah Magazine spoke with Taylor regarding the viral sensation she’s become from the woman yelling at a cat meme. When asked about her thoughts on the matter, Taylor says:

“During the screaming scene, I was truly terrified for my life and my safety. When I look back now, that life seems like someone else’s. I have healed and grown so much stronger since that moment and am in such a happy place with my husband and daughter. I never imagined of all my TV moments, that would be the one to become a ‘meme’ sensation.”

Hopefully that puts some perspective on everything, and if you were once scratching your head on all this lady yelling at a white cat meme nonsense, now you know exactly what it’s all about!

Want to keep up with this vegetable-hating cat who is the cat lord of memes?

You can follow him on Instagram at Smudge_Lord. I assure you that his memes and images are endlessly entertaining and you won’t be disappointed.

Former Stray Kitten Travels The World With Her...