Way down in Louisiana not far from the Big Easy, there’s a town called Metairie. And for one cat that lives there, he’s got a serious issue that’s caused his owners to even file a police report. You see, the gray tuxedo named Admiral Galacticat is a bit of a kleptomaniac. And you’d think that he’d steal cat food or toys or catnip, but that sort of loot isn’t up his alley. For Admiral, he likes to steal laundry. And not just a few articles here and there. He’s taken everything from dishtowels to swimsuits. 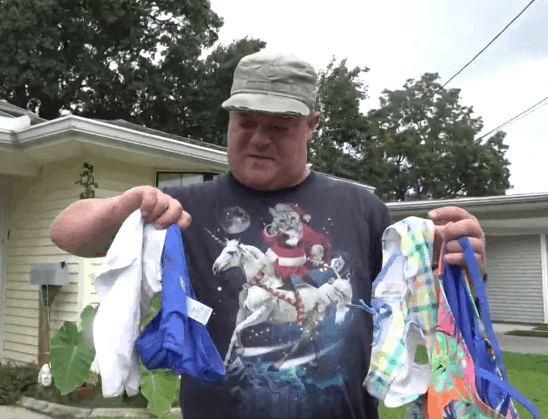 But before his owners, Joseph and Heather Bardi, were able to figure out via surveillance that this was their cat bringing home all these clothes, they were generally disturbed with the random articles showing up night after night.

Once they caught their cat redhanded on a recently installed camera, they went to work on Facebook trying to figure out which one of their neighbors it was was that their cat keeps stealing laundry from.

They posted in a private Facebook group called Metairie area online Garage sales, and quickly they were able to get down to the bottom of it. 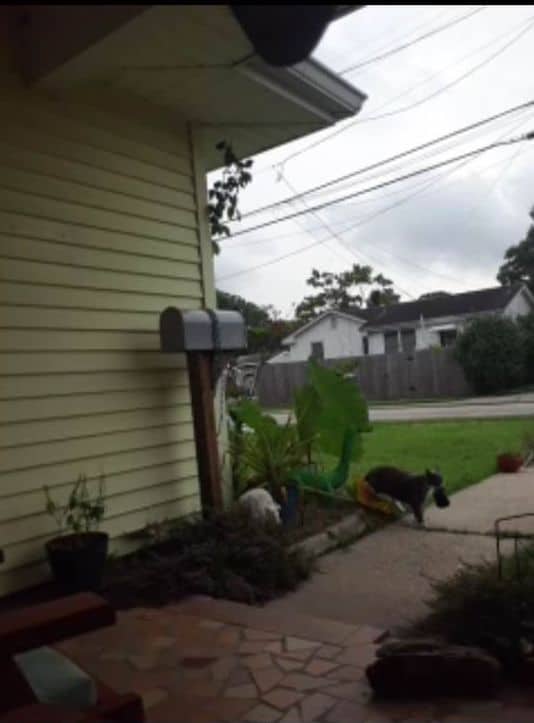 Hi, Unlucky Neighbors! I live in Metairie on oaklawn kinda behind the Dorignacs. My cat is stealing your laundry. I have no clue where else to post to reach you all. I’ve tried the nextdoor site and have had no luck Attached some pictures. The one is of my cat, Admiral Galacticat. Until this coronavirus bs began, he has been an indoor cat since i got him at 3 months old(he will be 4 on July 24). Then the rona hit and he got sick of us being around constantly and basically begged and pleaded to go outside. Now he loves to just roam around playing with the other rando cats in the neighborhood. Cool. His girlfriend is Lucille, the lil black cat that roams the block. Everyone is happy especially since I’ve observed him looking both ways before he crosses the street. 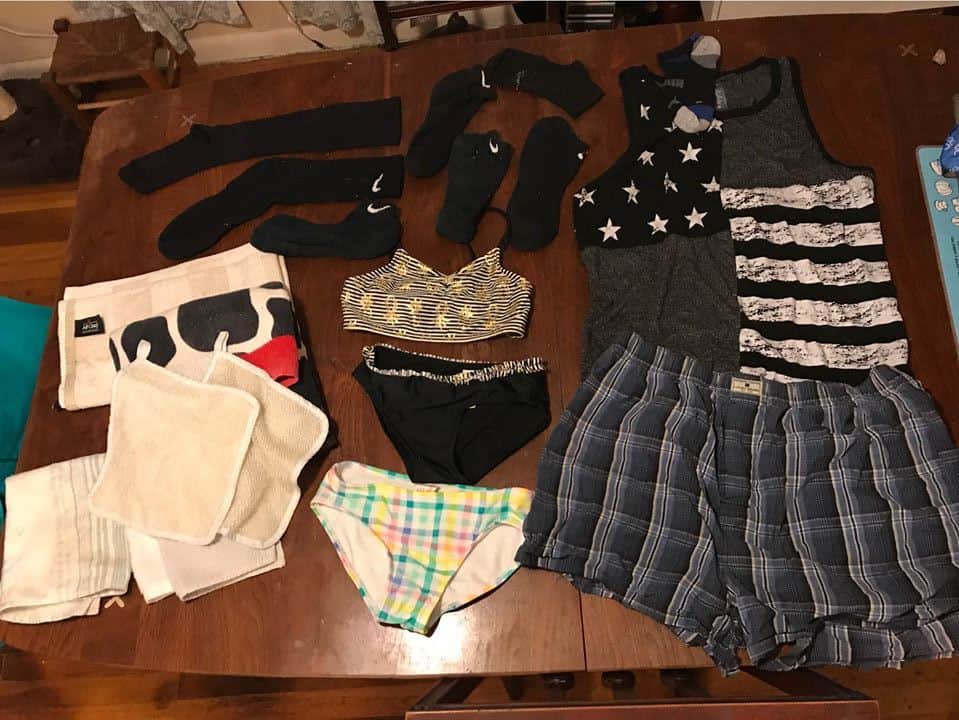 All was fine and dandy until two weeks ago when suspicious items started appearing on my front porch. First was a tank top and two nike socks. The next morning, a dish rag, a ripped pair of boxers and more nike socks. Now in that past two days, 1 1/2 a girls bikini, size medium, a few more dishrags and a beach towel. All seemingly freshly out of the dryer mind you, except the bathing suit and towel that smelled like sunscreen, because i also found a wad of dryer lint on one of the socks. First i thought a drunk just left stuff on my patio because the lamplighter is right up the street and drunk people are often seen stumbling home in the wee hours of the morning.

ANYWAY I got security cameras and lo and behold, it is MY CAT that is stealing SOMEONE’s clean laundry and bringing it home. Now I am grateful its not a dead sparrow or mouse, but I am sure someone is at home scratching their head as to where their clothes keep disappearing to. Trust me, it is not the dryer monster, but Admiral. If you would like to retrieve your items I have been collecting them and i will wash them again cause, cat spit, but you are more than welcome to come by and grab the bag and shame my asshole cat if he is around. Just message me. Also, sorry my cat is a kleptomaniac.

As you can see, Admiral Galacticat doesn’t feel too guilty about this shenanigans! 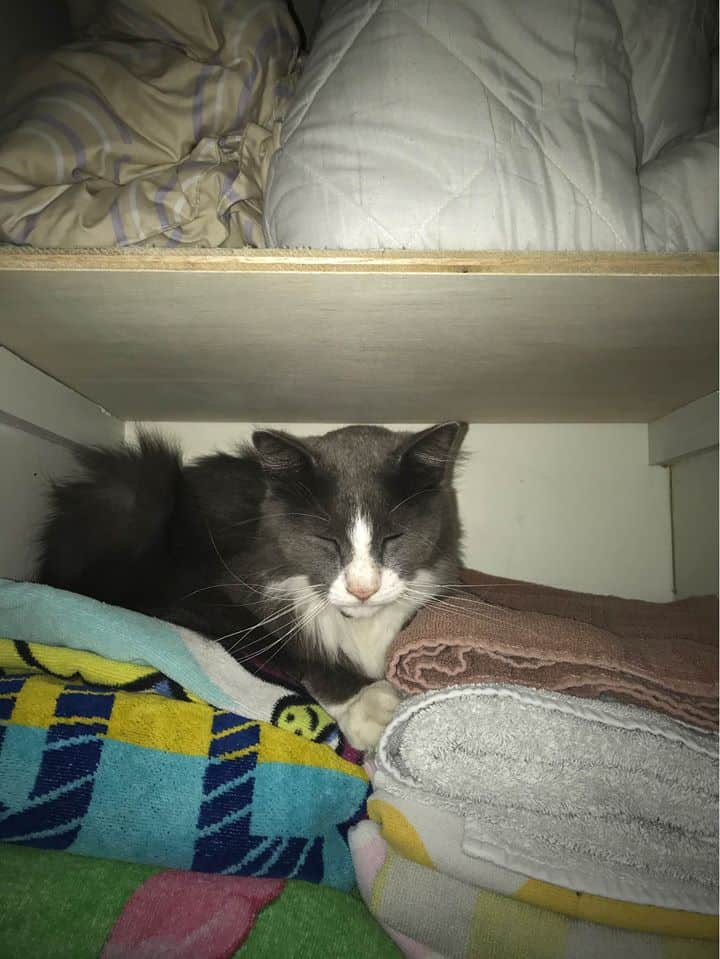 Casey O’Neal, one of Admiral’s victims, didn’t think much at first about the missing sock here and there. But quickly he started to wonder when more and more socks, as well as other laundry, started to go missing. And when Casey happened to see Heather’s post in that local Metairie Facebook group, things started to make a lot more sense. And it seems that many have been amused by this laundry klepto cat, because Heather’s post has been shared over 13,000 and counting!

“At first I was kind of thinking ‘what kind of idiot lets a cat steal their clothes?’ but then I ended up being that idiot. As soon as she mentioned Nike socks, I was like oh those might be mine.” — Casey O’Neal

Check out the news story below that was featured on a local New Orleans news station:

Want to read about another cat burglar out of Florida? And, believe it or not, he’s a tuxedo cat, too! Hmm, makes me wonder if there are more tuxedo cat burglars out there!

All Images Courtesy of Joseph and Heather Bardi

Meet Rascal Wild: A Spry Feline Who Got The Happy Ending He Deserves