The Maine Coon cat is the one of the most easily recognizable breeds that there is. Their impressive size and majestic coat distinguish them among many other cat breeds with just one glance. With hearts as big as them, these loyal cats love their family members—whether that’s a house full of kids, other pets, or even both.

We know that Maine Coon cats are the largest of all cat breeds, but what other fun facts do you know about these gentle giants of the cat world? 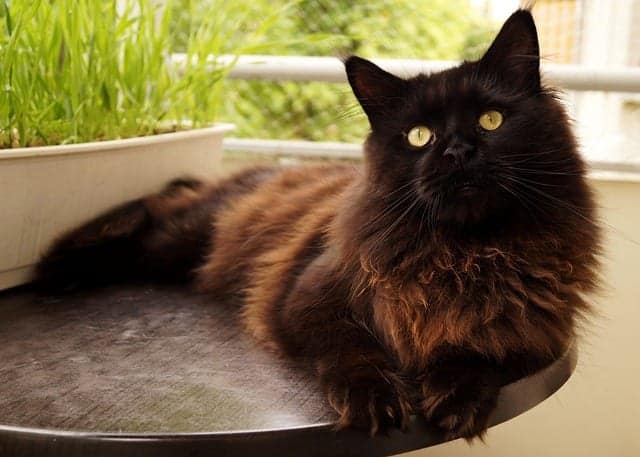 Meow? I’d much rather trill or chirp

If you’ve ever had the pleasure of having or knowing a Maine Coon cat, then you’ll know what we mean when we say this. Not exactly sure what a trill or chirp is? We’ve included a cute little Maine Coon group of cats for you showing off these precious sounds…

The official cat of Maine

This sort of seems like a given, right? Since 1985, the Maine coon cat has been officially recognized as the state cat of Maine. And Maine isn’t the only state to have a state cat, as the calico cat is the official state cat of Maryland!

From their superior hunting and perching abilities to their large frame and luxurious dense coat, this original cat breed of North America is built to withstand Maine’s harsh winters. Although Maine Coon cats are now domesticated, these are cats that have a passion for the great outdoors and being one with nature.

Maine coon origins: Many believe that this breed comes as a result of mixing short-haired cats and a long-haired cats that were brought to America by way of the Vikings. 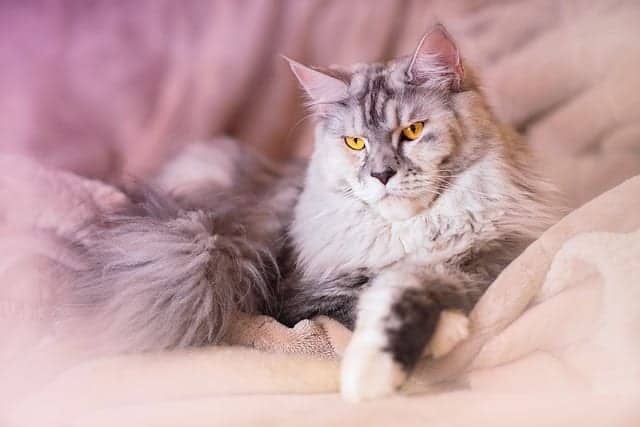 This is one big feline!

There are several Maine Coon cats which hold Guinness Book World Records, with titles such as “longest tail” and “longest body”, etc. Take a look a Barivel, who currently holds the title as “The Longest Cat in the World”…

Not only do these cats weigh considerably more than your average 8lb feline, but they’re much larger in both height and bone structure. The average cat stands at a height of 9-10″, which the average height of a Maine Coon cat is 10-16″. In regards to weight, a Maine Coon cat can average anywhere between 12-25lbs and still be considered a healthy weight.

There are two other cat breeds that retain striking similarities to these gentle giants of the cat world: the Norwegian Forest Cat and the Siberian.

From left: A Norwegian Forest Cat, A Siberian, and a Maine Coon

Curious how these beautiful kitties came to be so large?

Well, MaineCoonExpert.com tells us that legend has it that Marie Antoinette may have had something to do with it. See below for more details…

One theory involves Marie Antoinette, the ill-fated Queen of France who was executed in 1793. The story goes that before her death, Antoinette attempted to escape France with the help of Captain Samuel Clough. She loaded Clough’s ship with her most prized possessions, including six of her favorite Turkish Angora cats. Although she didn’t make it to the United States, her beloved cats safely reached the shores of Wiscasset, Maine, where they bred with other shorthaired breeds and developed into the modern breed of the Maine Coon….The most plausible theory is that it was born as a result of mating between native, short-haired cats and foreign, long-haired cats that were brought to the continent by the early British settlers.

Another theory, and highly likely, relates to Bergmann’s rule. This rule means that warm-blooded animals of the same species (in this case, Felis catus) generally increase in size at higher latitudes, as temperatures drop. 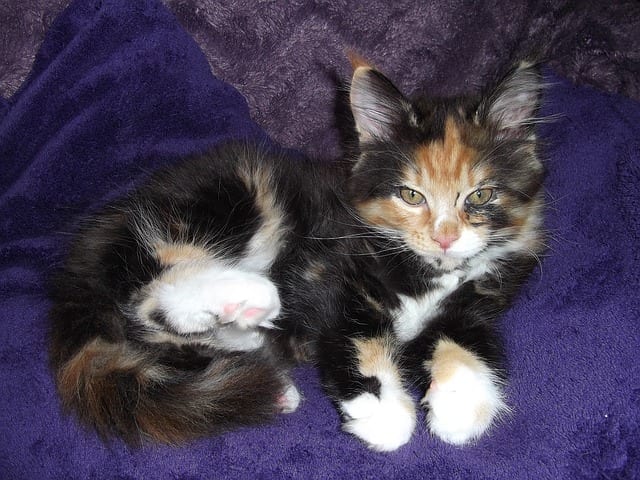 Interesting little Maine Coon tidbit: Although we know fully well nowadays that this is far from true, many admirers of this breed used to believe that they shared racoon DNA due to their bushy tail.

Fun Maine coon coat fact: As they grow, the hair will not grow evenly across the length of the body.

Despite most cats reaching maturity around one year of age, a purebred Maine Coon cat doesn’t reach their full maturity till around three to five years of age. Take a look at this image uploaded by a Reddit user showing the difference in size of his domestic shorthair compared to his other cat, a Maine coon: 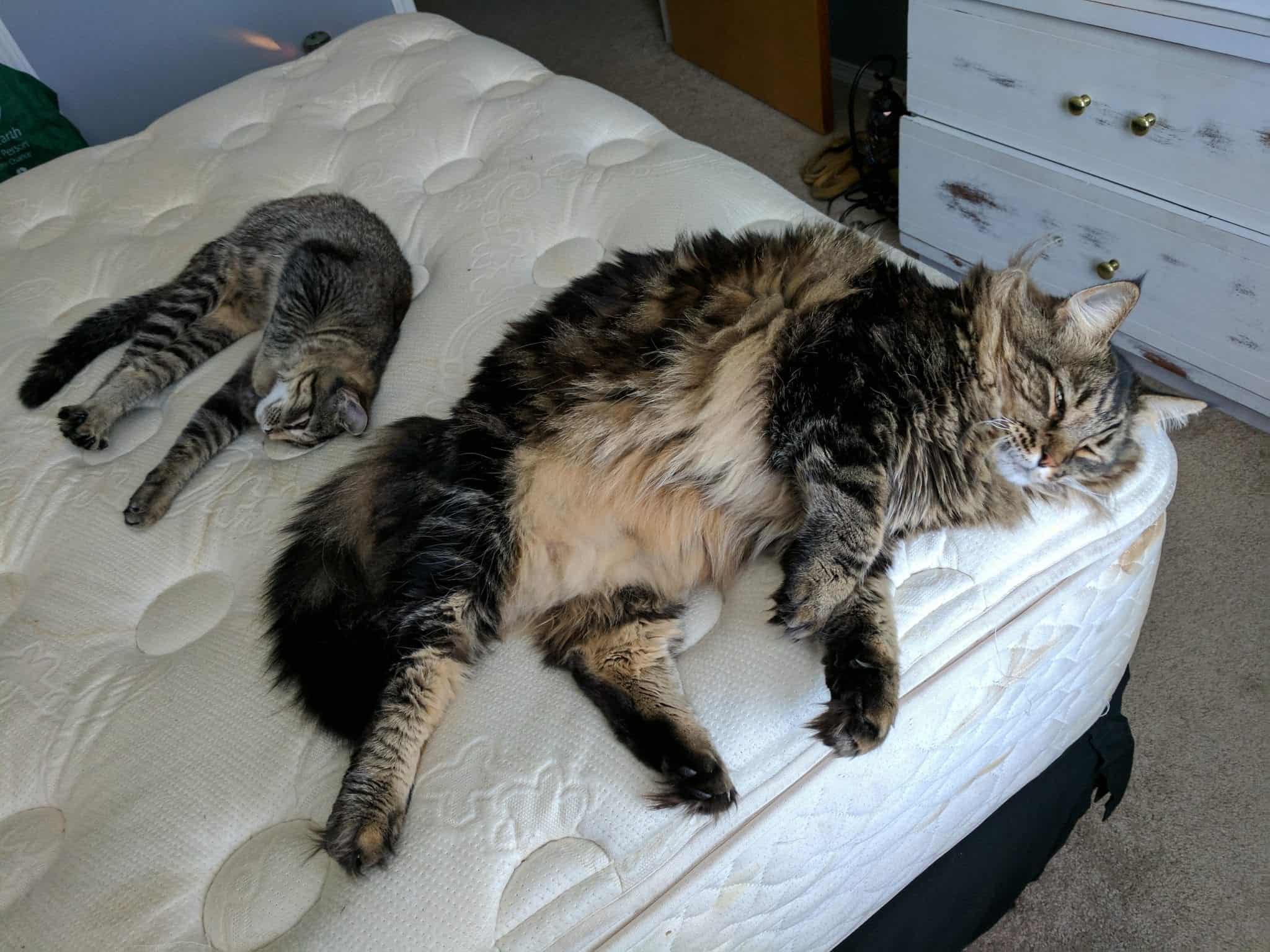 Did you learn anything new about this big and beautiful cat breed? Share with your friends who love coon cats, just like you!

Oldest Living Cat In The US Celebrates His 31st Birthday

If Your Cat Is Avoiding The Litter Box, Here’s Why…

5 Ways Cats Are Good For Your Mental...

Why Do Cat Eyes Glow?