Meet Jake The Polydactyl Cat: A Rescued Cat With A Story Of Survival

When recently researching for an article on fun facts about polydactyl cats, I came across a handsome extra-toed ginger kitty named Jake. He is already super intriguing given that he has 24 toes (keep in mind most cats have 18 toes). But there’s more to his story that makes him special. I reached out to Jake’s owner Rebecca, and she shared with me his rescue story. Many cats do not have an easy start at life, and Jake is certainly one of them.

I’ve included her detailed responses to my interview questions, so you can learn more about this handsome kitty with toes for days in her thoughtful words. I’d like to give a special thank you to his owner Rebecca for allowing me to share his story with you. He’s lucky to have been rescued by a kind-hearted human like her. 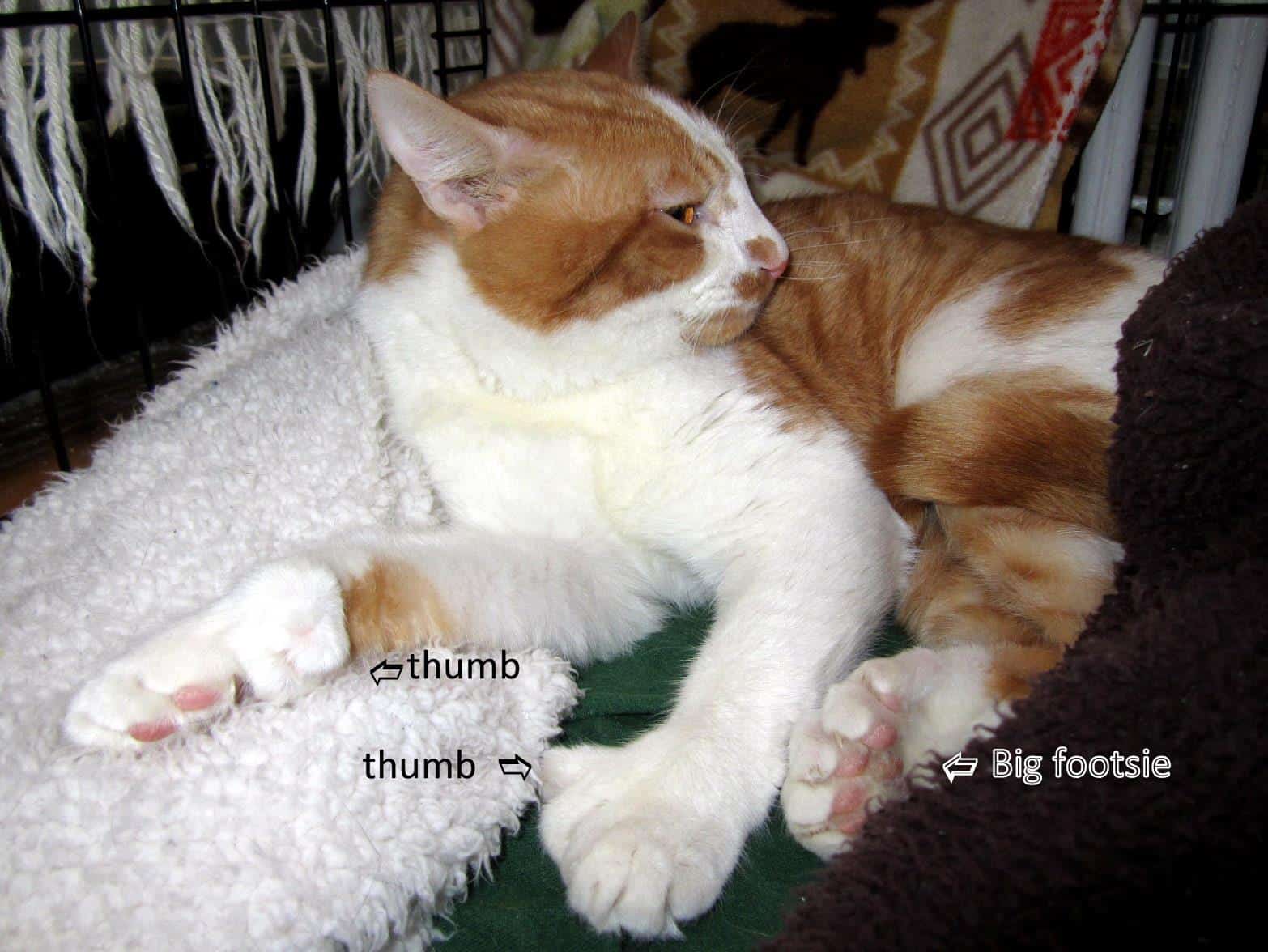 How did Jake come into your life?

Jake was brought into BARCS (Baltimore Animal Rescue and Care Shelter) by Animal Control in January 2013. He was brought in along with 42 other cats who were rescued from a hoarding situation. The cats were all intact/not fixed, unvaccinated, malnourished, and covered with fleas. They were inbreeding and undersocialized; most were also polydactyl.

BARCS is a large open-intake animal shelter in the city, so when the shelter is full (as is the case when animals rescued from a hoarding situation come in), they send a plea out to their foster caregivers to see if anyone can step up and relieve some of the in-shelter overflow. I volunteered to foster Jake, who was one of the only remaining “Pringles” cats at the shelter. (They named all the cats brought in from that group “The Pringles,” I guess because they were all packed/stacked in so tightly, like Pringles in a can!) He had an upper respiratory infection, he was terrified, and he was despondent, just cowering in his litter box in his cage. 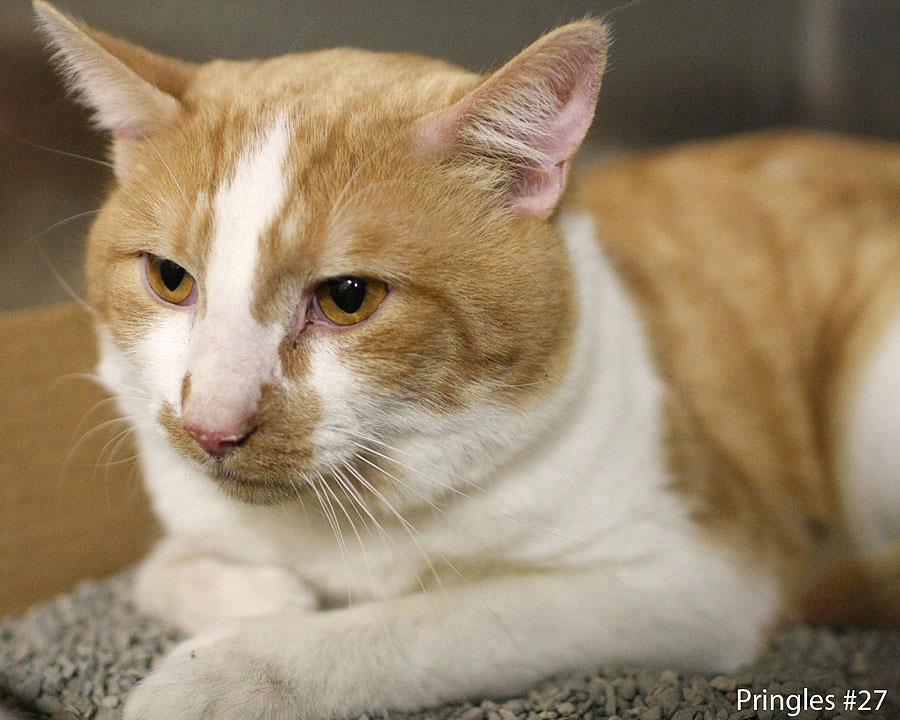 Note: I gave Jake his name; to BARCS he was Pringles #27. I named him after Jake Barnes in The Sun Also Rises by Ernest Hemingway, since polydactyl cats are sometimes called “Hemingway cats.”

I brought Jake home and at first he stayed in my bathroom. He did let me pet him while he hid in his carrier, but otherwise he was very apprehensive and reluctant to let me handle him.

Next I moved him into a large dog crate into my office, so I could work on socializing him in confined quarters (if I had instead let him loose in a room, he would have just hid to avoid contact). He stayed in the dog crate for months.

How old is Jake?

Staff estimated Jake to be ~5 years old when he came into BARCS in early 2013, which would put him at 12 years old now. He might be a tad older; I think he is losing his hearing. 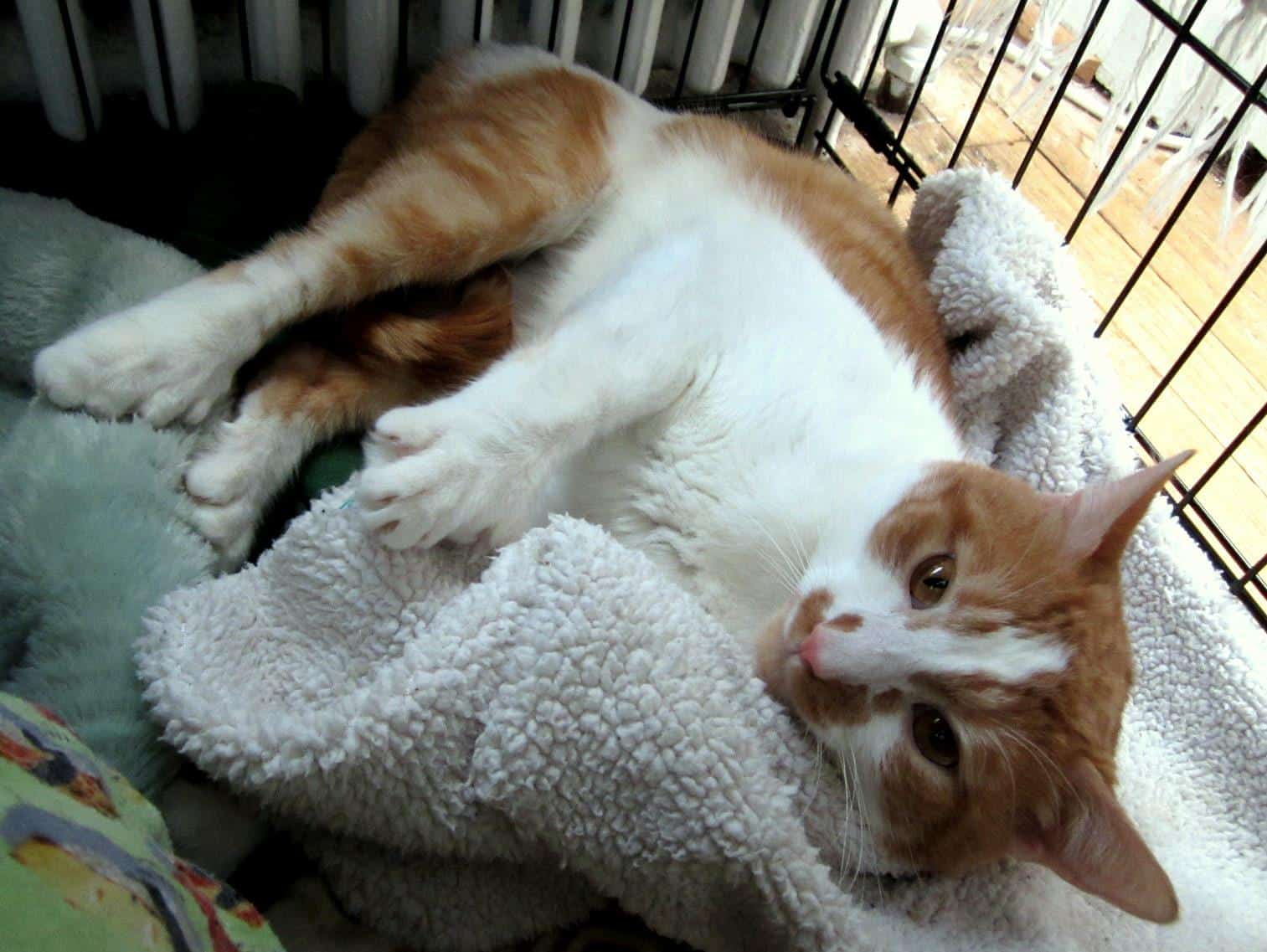 How many toes does Jake have?

I believe Jake has 24 toes in all – six on each front paw and six on each back paw. I say “I believe” because he really does not like me touching his feet! I have to take him to a groomer to get his nails trimmed – he won’t let me do it, and if I let him go too long without a nail trim, his nails start to embed in his toes. Ouch!

His front paws have the hallmark “thumbs” of a polydactyl cat – they look like catcher’s mitts. His back paws look like flippers. Some of his back toes are SO TINY. His back feet are very ticklish and I can’t resist touching them gently now and then, just to see him shake his foot because it tickles so much. 😉 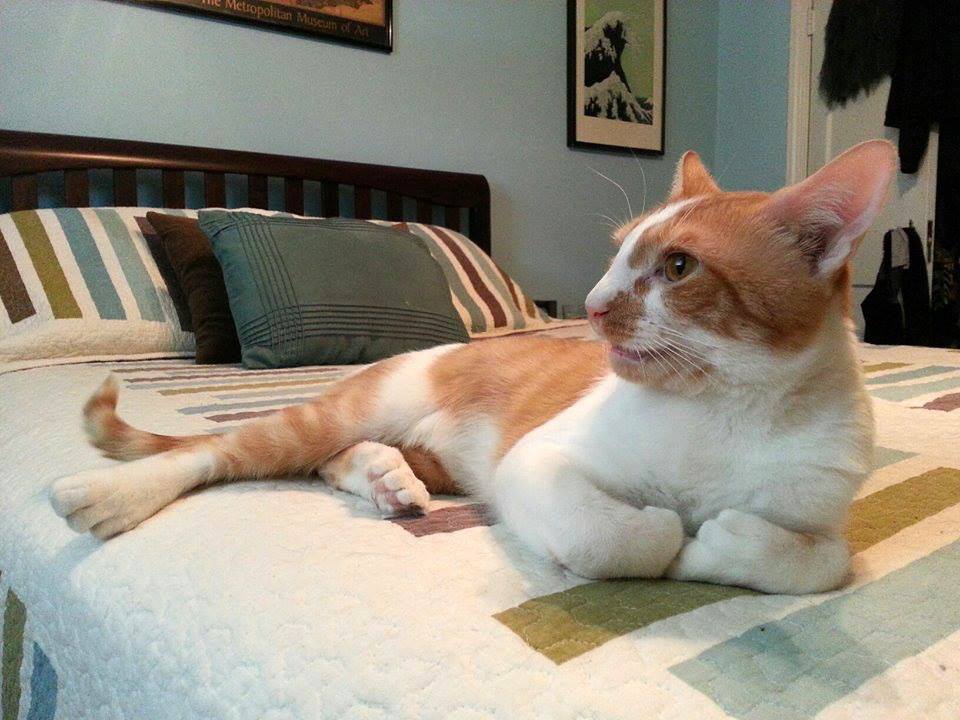 Gosh, where do I begin? In sum, Jake is affectionate, playful, loving, and wildly entertaining.

Of course it took a long time for Jake to get to where he is today (I’ll get to that in your last question). He still hides when strangers come over, he still hides if he thinks I’m going to try to nab him for a vet visit, and he still does not like being handled.

That said, he is an absolute lovebug who loves to be petted and caressed. If I am sitting on the couch, as soon as he hears me sit down, he jumps up from “his” chair in my dining room and comes running. He hops up to sit beside me and he nuzzles my hand until I pet him. He purrs up a storm and pours his head onto my lap.

Speaking of laps, he has only recently become a lap cat! He has always loved sitting next to me and putting his head on my lap, but just in the last month or so he’s decided his new favorite place is fully camped on my lap on a soft blanket while I watch Netflix. He even gets uncharacteristically territorial, warning my resident bully cat, Capone, to back off if he tries to scare him into getting up. (Usually Jake is very intimidated by Capone, aka “Pony.”) 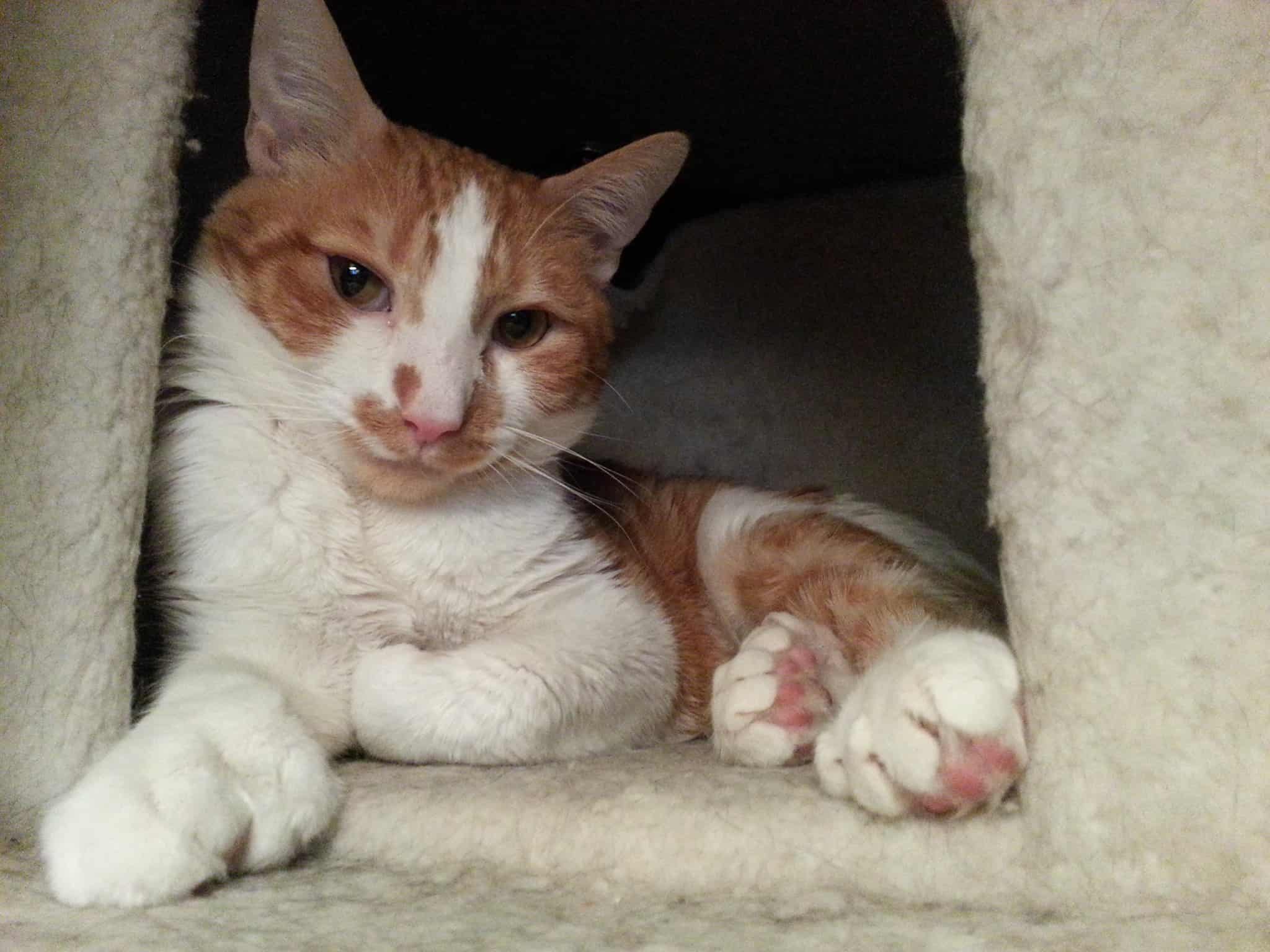 Jake is also very playful, and he often entertains himself at night in secret, when nobody is watching. Sometimes I hear a commotion upstairs and I go up to the second-floor hallway and find him tossing toy mice up into the air and chasing and pouncing on them. If I see him at play and toss him a mouse, he rears up on his hind legs like a pony and does a little-hop dance before pouncing on his prey.

He chases shadows on the floor, too. I’ll notice him watching something intently on the kitchen floor, and then I’ll realize he’s stalking my shadow. So I’ll make a shadow shape with my hand and move it across the floor. He scampers after it, trying to catch and hold the shadow shapes with his massive mitts. He also loves looking out my windows and watching the birds and the squirrels. 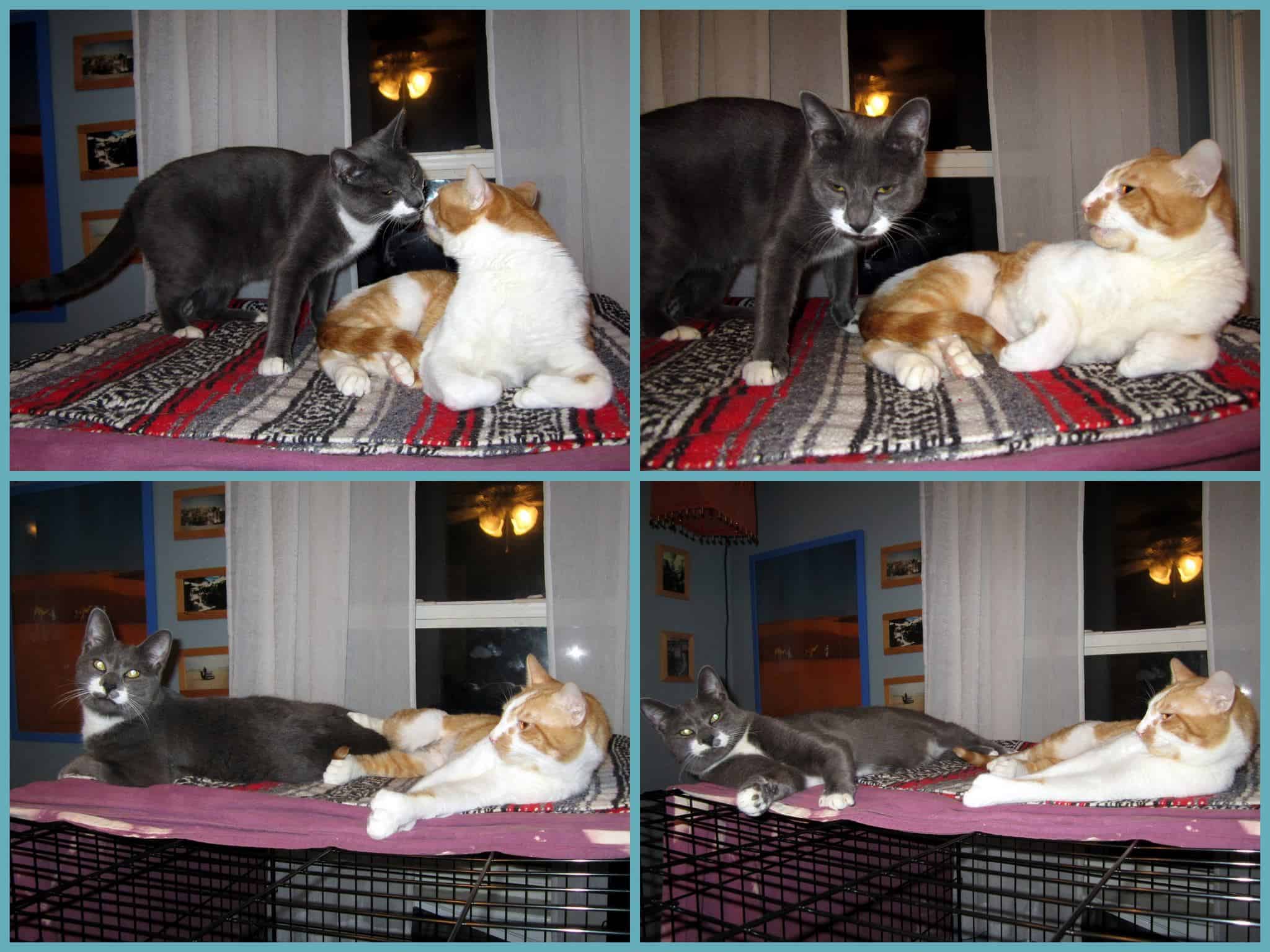 Jake LOVES kittens, although he hasn’t had the pleasure of entertaining any since I’m no longer fostering. When I was fostering regularly a few years ago, I discovered that Jake was always very eager to meet newcomers, especially kittens (after a mandatory quarantine, of course). In fact, kittens might have helped him come out of his shell a little. He loved chasing after them and playing with them and even snuggling with them.

When Jake gets excited (like when he sees kittens or wants to climb onto my lap), he emits a very high-pitched meow that sounds like “EEEEEEEEEEEE!” For this reason one of his nicknames is “Jake the Pterodactyl Cat” (not much logic to that one except his screech makes me think of a noise a prehistoric bird might make – and of course because “pterodactyl” rhymes with/sounds similar to “polydactyl”). 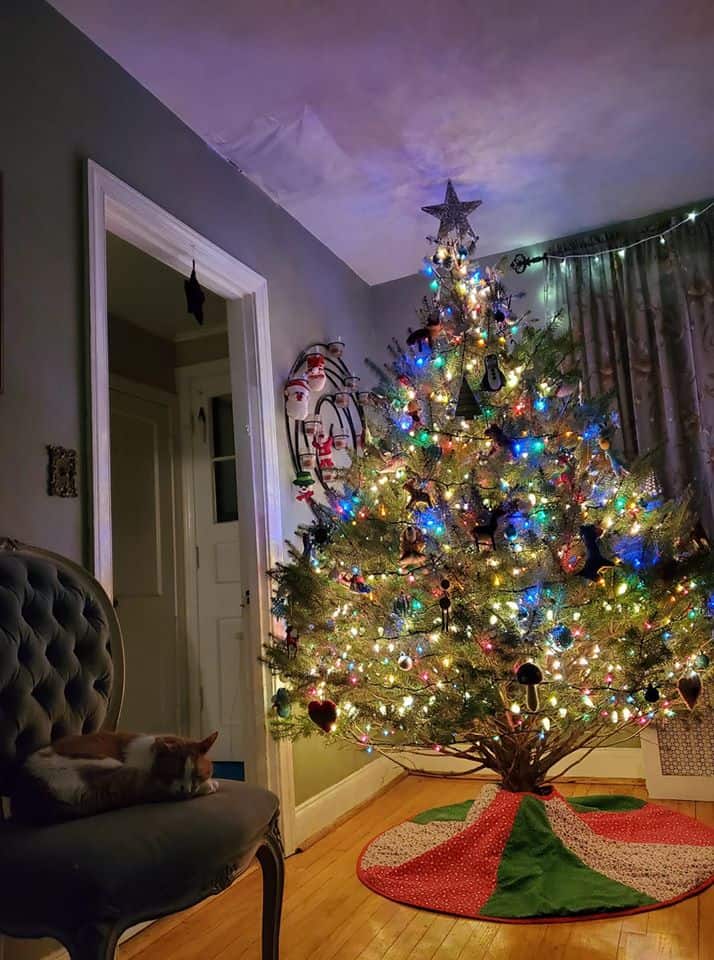 Jake also loves Christmas trees. I don’t mean he likes to climb them or bat at the ornaments – he seems to simply love being near them. There is an antique chair with a velvet seat cushion that I have to move every year when I bring in a freshly cut tree from my friend’s Christmas tree farm. I set the chair near the living room door across from the tree, and throughout the holiday season, Jake can often either be found under the tree or on the chair gazing at it, or sleeping peacefully.

In December 2013 Jake was sitting under the tree one day. This was before I officially adopted him. I joked that he was thinking, “Maybe if I sit under this tree, my foster mom will adopt me and keep me forever.” He got his wish!

I could go on and on; there are so many quirky and unique and amazing things about Jake. He is a survivor and he has come so far. He was so frightened when he first got here, and his former life with a hoarder must have been so hard. 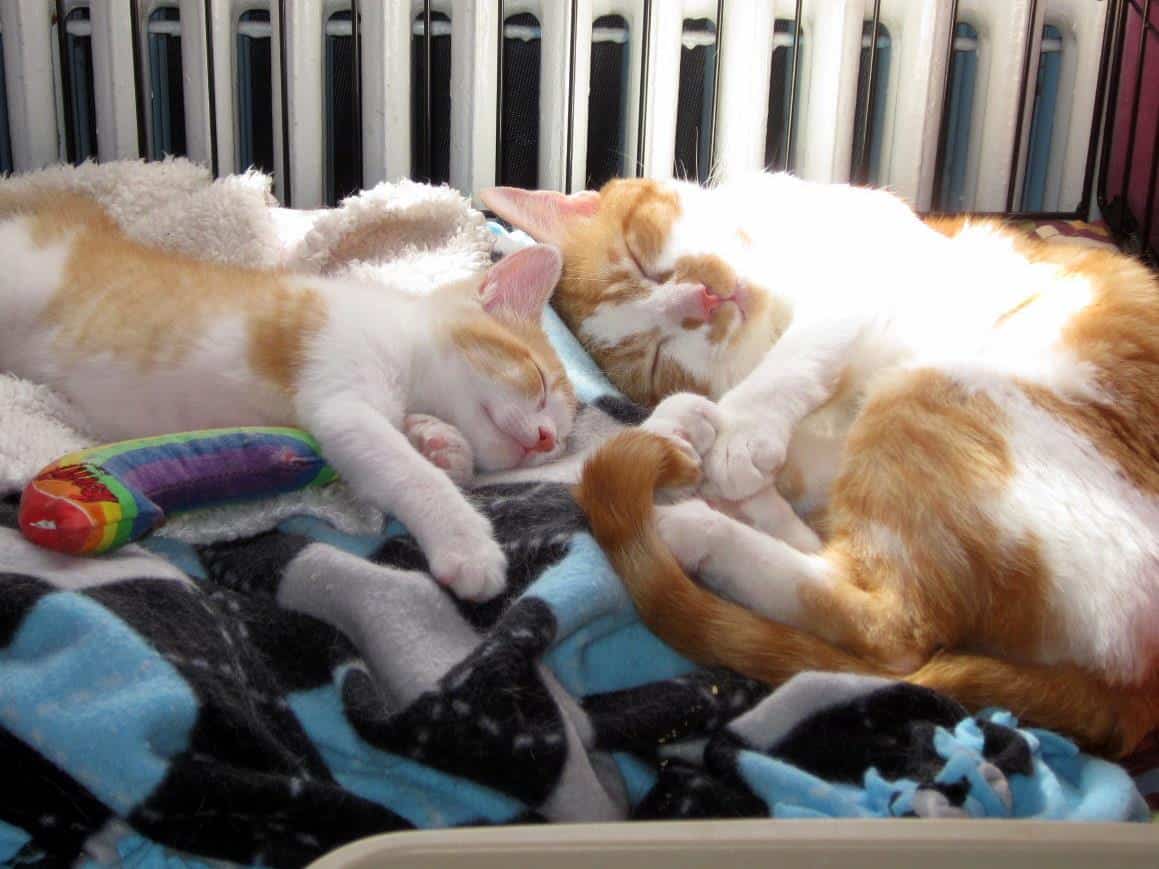 He also dealt with some health issues while in my care – he used to get these terrible recurrent lesions, usually on his face, called eosinophilic plaques, presumably due to allergies. He was on prednisone, then Atopica, and then I switched his food and got him off all his meds and he was fine after that. I even recently switched his food back again and he’s had no recurrences, knock on wood. Maybe it wasn’t allergies after all, or maybe he outgrew the allergies over time.

Anyway… it warms my heart to see Jake so loving and playful and happy. Like I said, he’s been through a lot. 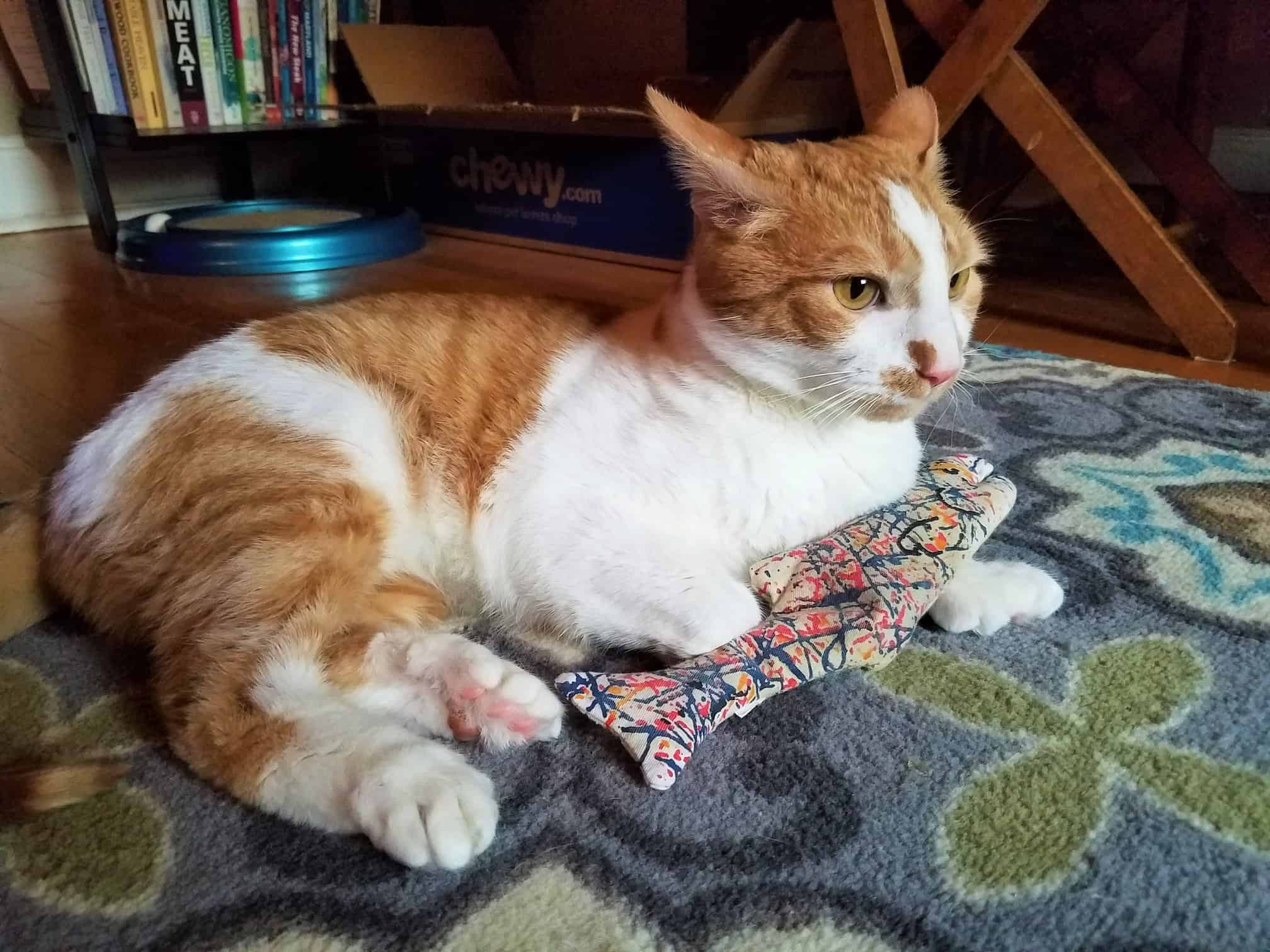 How long did it take for him to adjust to his new life with you?

As I mentioned earlier, Jake spent several months residing in a large dog crate in my home office so I could work with him to get him socialized. I would literally crawl into the dog crate on my hands and knees and lay there and talk to him and get him used to my petting him. At first, he would be fine with my touch one moment, and then he would whip his head around as if he were going to bite or swat me. He never hurt me, but the unpredictable nature of his behavior scared me sometimes. Eventually he overcame his distrust and stopped doing that though.

That stage of the socialization process went on for at least a couple months. Then I started letting Jake out of his crate for short periods of time while keeping the door to my office closed. I let  some of my other cats enter the room; they were very curious about him. I soon discovered that Jake likes other cats – not a huge surprise since he used to live with so many! 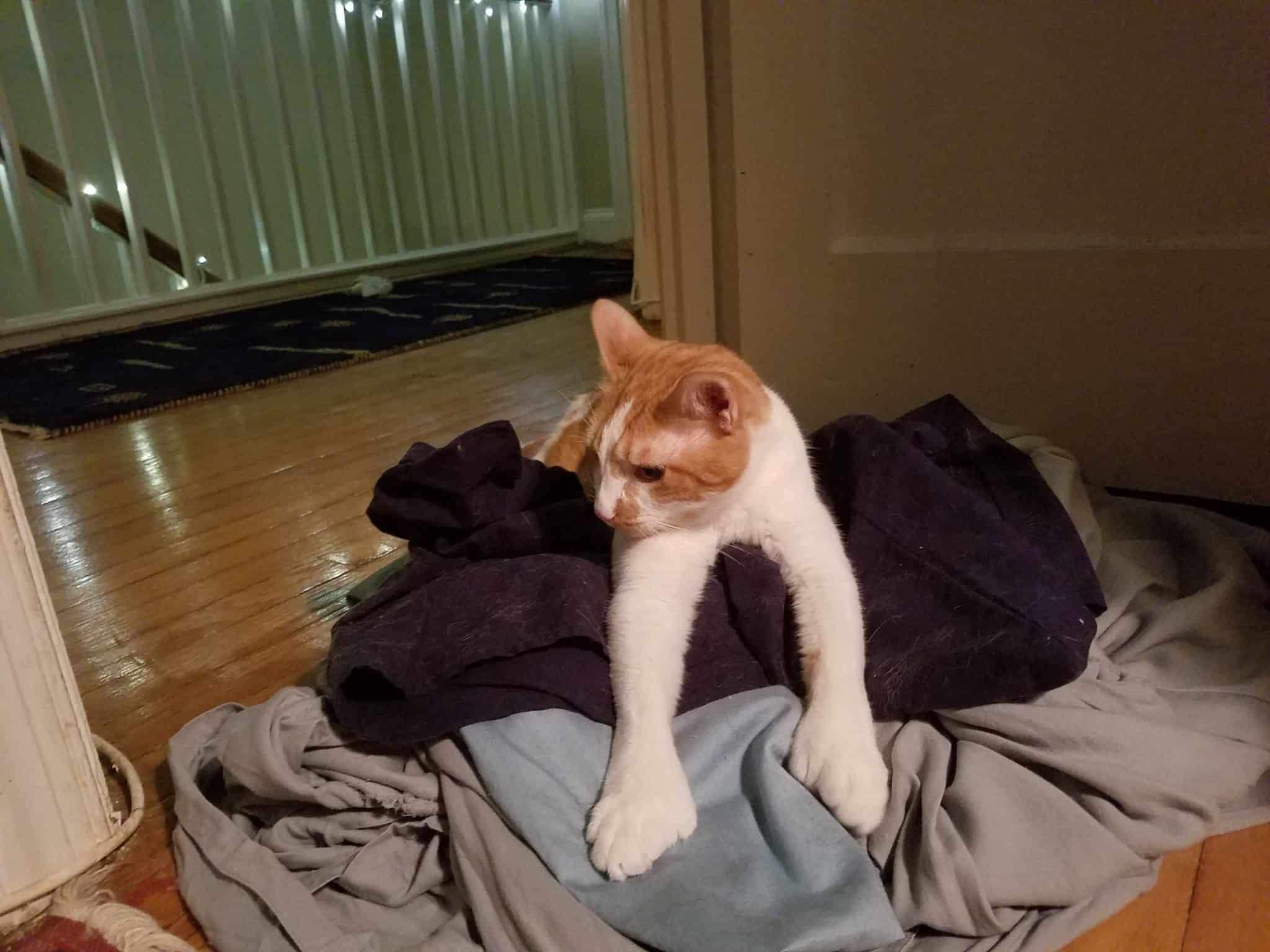 Eventually Jake graduated from the crate altogether but stayed in my office. I think it was midsummer 2013 (after bringing him home from BARCS in January) when I finally opened the office door and let him explore my house. It was funny and miraculous to see him creeping from room to room, exploring with some trepidation but also with great curiosity.

Over time, Jake grew more and more comfortable being out and about in the house.

Much of all this is documented on Jake’s Facebook page, which I initially started to help promote him for adoption. By the time I realized months later that Jake was here to stay, he had over 500 followers and I couldn’t leave them hanging! So I have kept his page up and active so anyone interested can read about his story and follow along with his antics and adventures. He has many admirers.

Jake is a wonderful cat – very much loved, and very loving. I am so thankful he came into my life, and I’m honored to be his caregiver. He’s a special little guy. <3 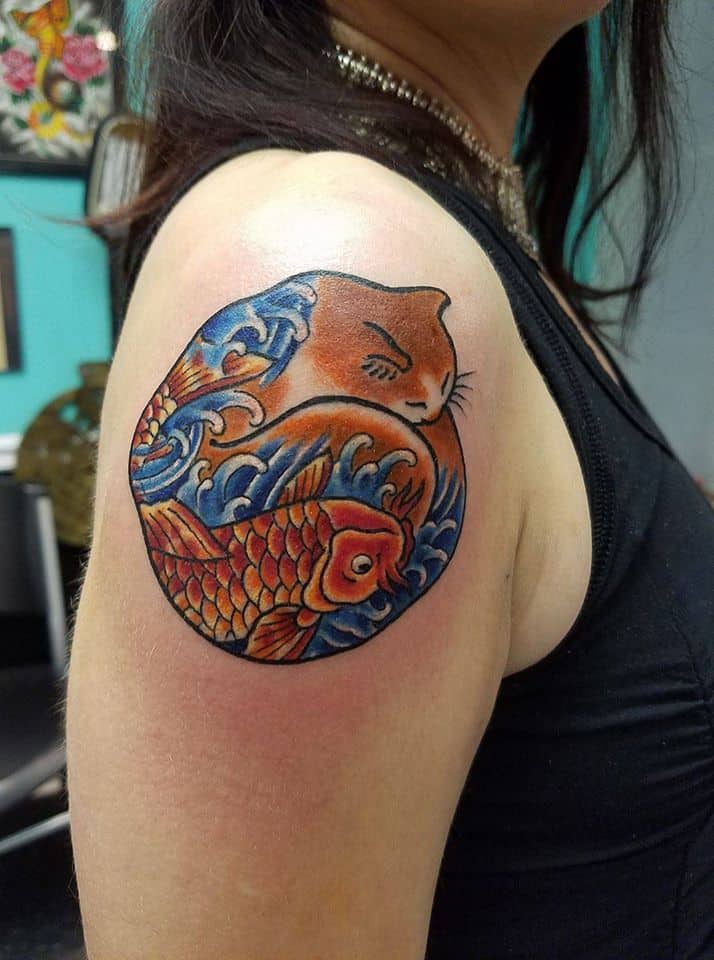 A tattoo of Jake with koi fish that Rebecca got in honor of her special kitty.

Want to learn more about polydactyl cats? Check out my article dedicated to these extra-toed cuties of the cat world here.

Are you crazy about polydactyl cats? Check out this video on the Cattitude Daily YouTube channel to learn all about these extra-toed cuties of the cat world!

All Images Courtesy of Jake the Polydactyl Cat