Pretty much every cat person knows Venus the two-faced chimera cat. Her stunning split face comes as a result of some rare and powerful genetics, and now there’s even a long-haired female calico cat who sports this stunning mask, too! Meet Quimera, a long-haired beauty from Argentina. She is described on her bio as “la gata de dos caras” which literally translates to “the two-faced cat.”

Quimera as an adorable kitten, back in early 2016 shortly before her rise to celebrity cat status… 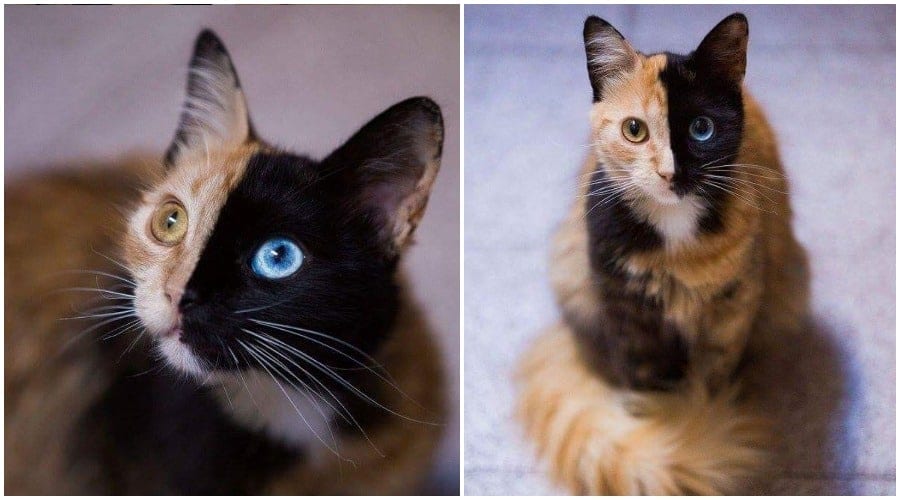 Not only does this latin feline have an impressive mask she wears, but her dazzling heterochromia eyes are a sight to behold as well. 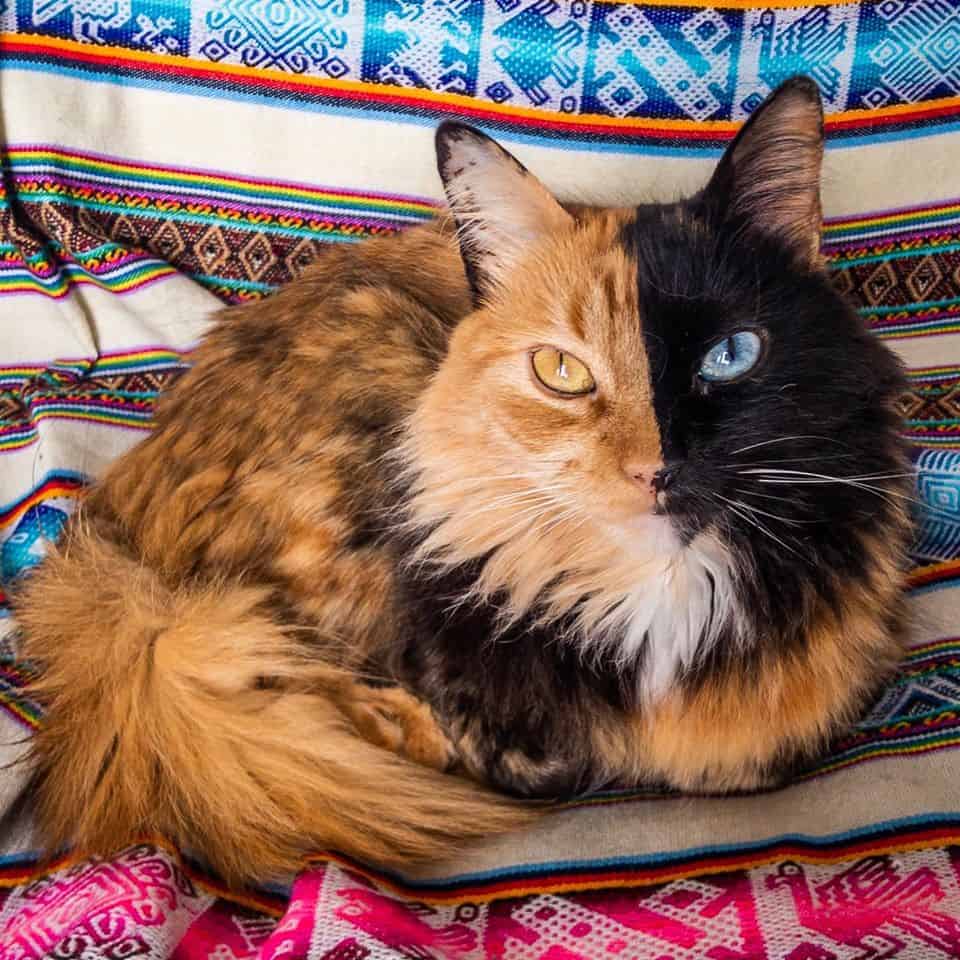 I reached out to Quimera’s owner, asking how such a beautiful and unique kitty came into their life. They said that they adopted this uniquely perfect cutie after finding out about her from a friend. And, as they say, the rest is history! 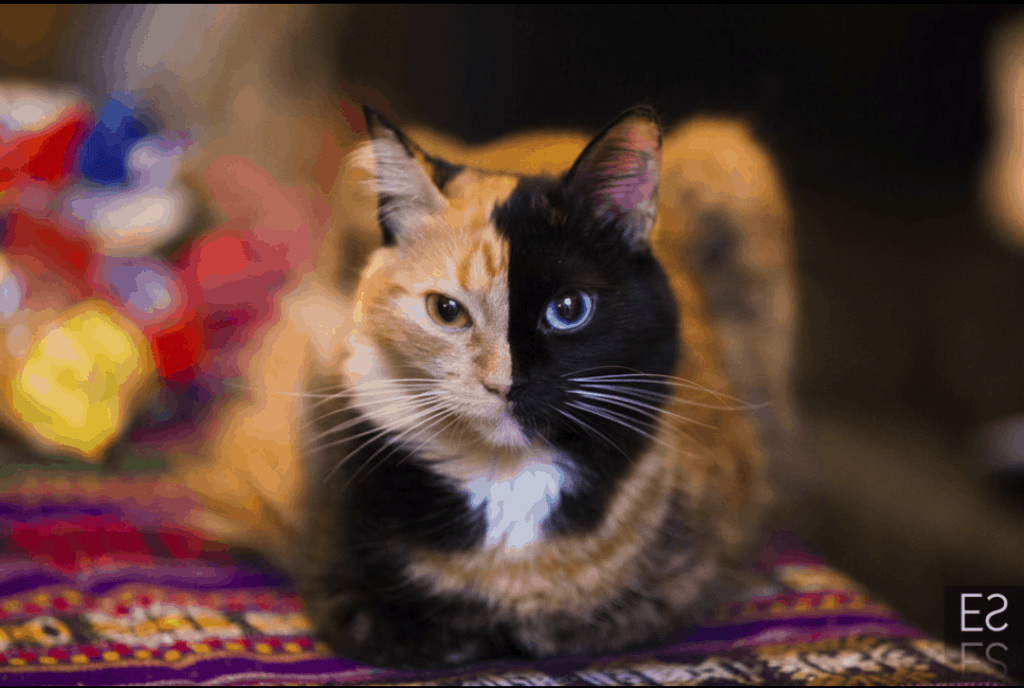 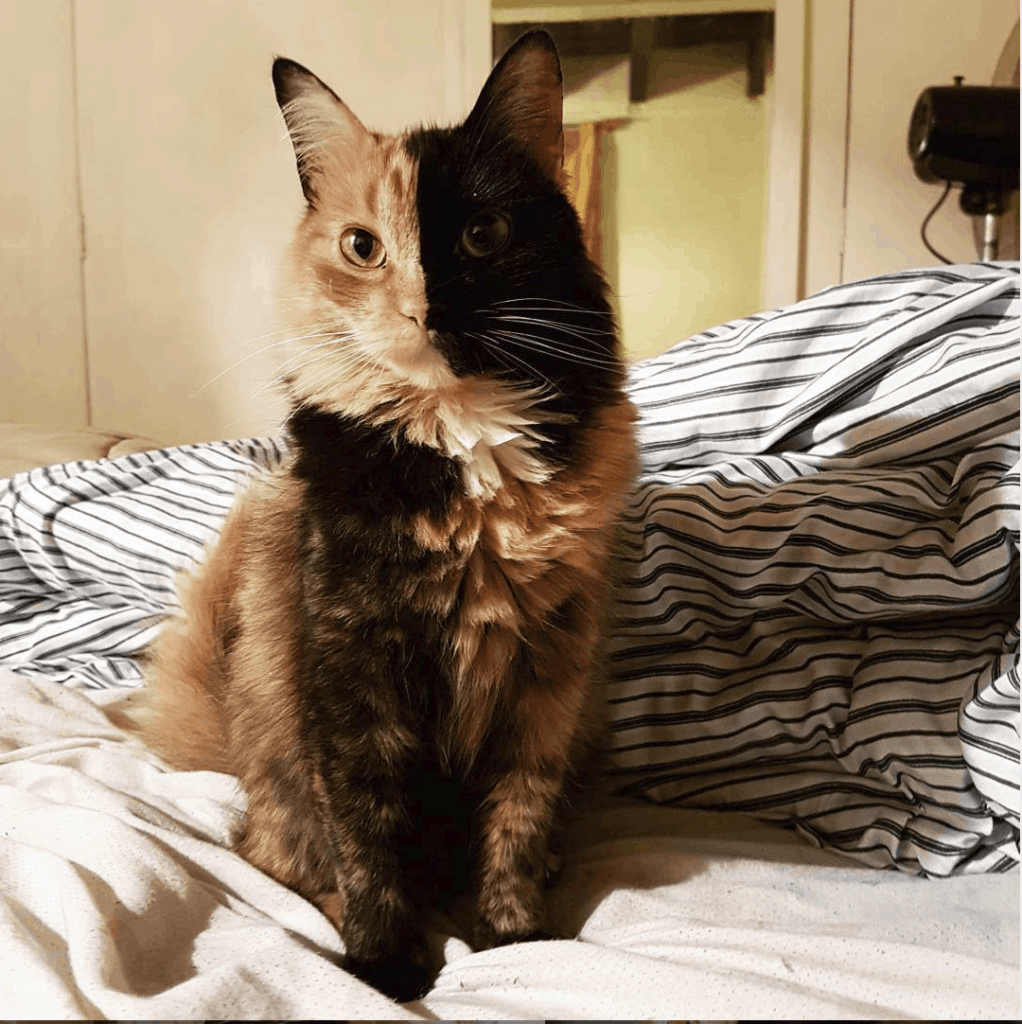 Aside from the fact that she’s a remarkably striking kitty, it seems that Quimera is laid-back, sweet, and doesn’t seem to know just how special she really is. Quimera is a cuddlebug and loves to lay in bed, you know, catching up on all her beauty sleep! A sweet cat who loves to love, Quimera likes passing the time with her sister from another mister, Kyra, too… 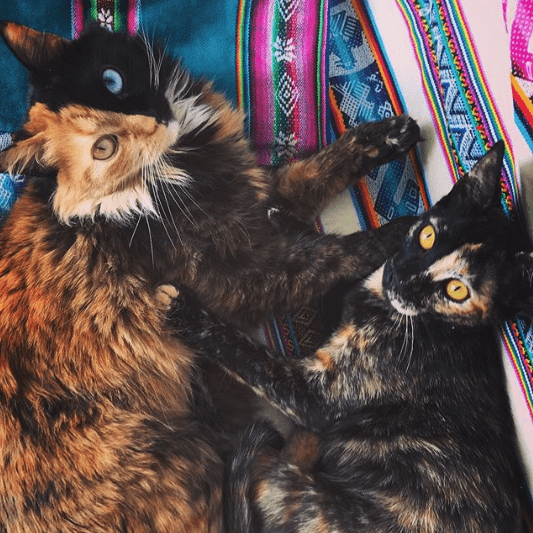 This celebrity kitty has nearly 100k Instagram followers and steadily growing, and she loves to be photographed by her dedicated human. 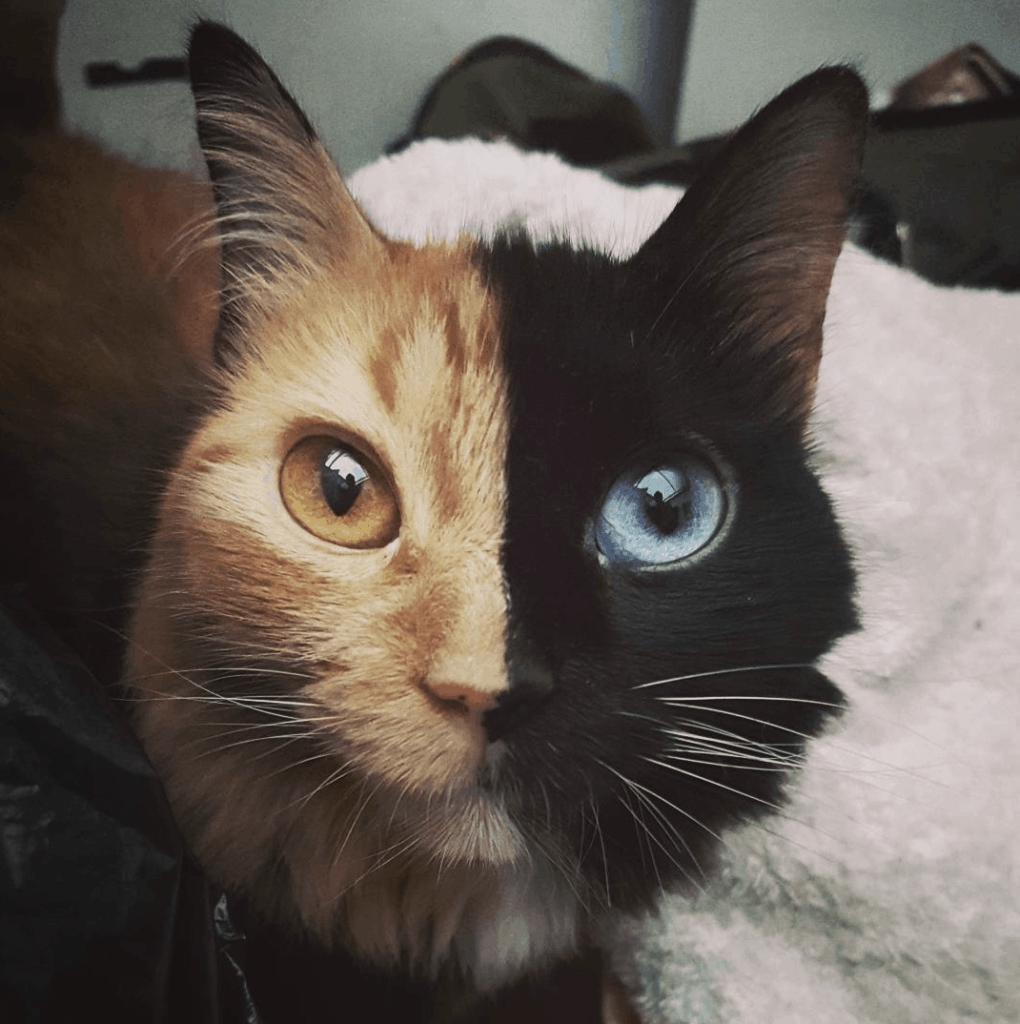 So, what exactly is a chimera cat?

National Geographic explains the science behind this rare naturally-occurring phenomenon for us. Interestingly enough, the reason for the split two-faced is due to the fact that a chimera cat has two different sets of DNA on each side of their body. A feline chimera is a cat whose cells contain two types of DNA, caused when two embryos fuse together. 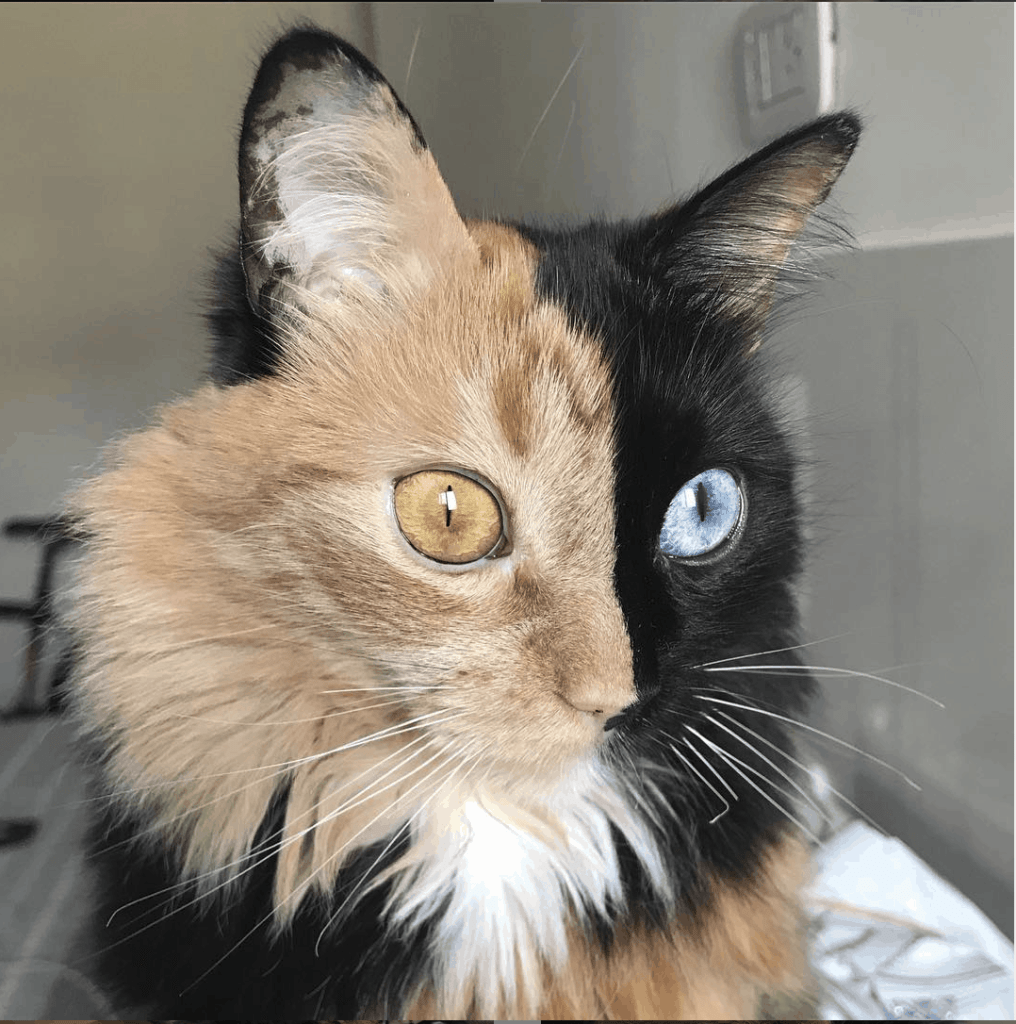 In Greek mythology, a chimera had a much different meaning then what we know it as today. A chimera was once “portrayed as a lion with a goat rising from its back with a snake for its tail”, and was thought to be a fire-breathing monster creature with three heads. Thankfully in the feline world, these kitty genetic anomalies are far removed from that! 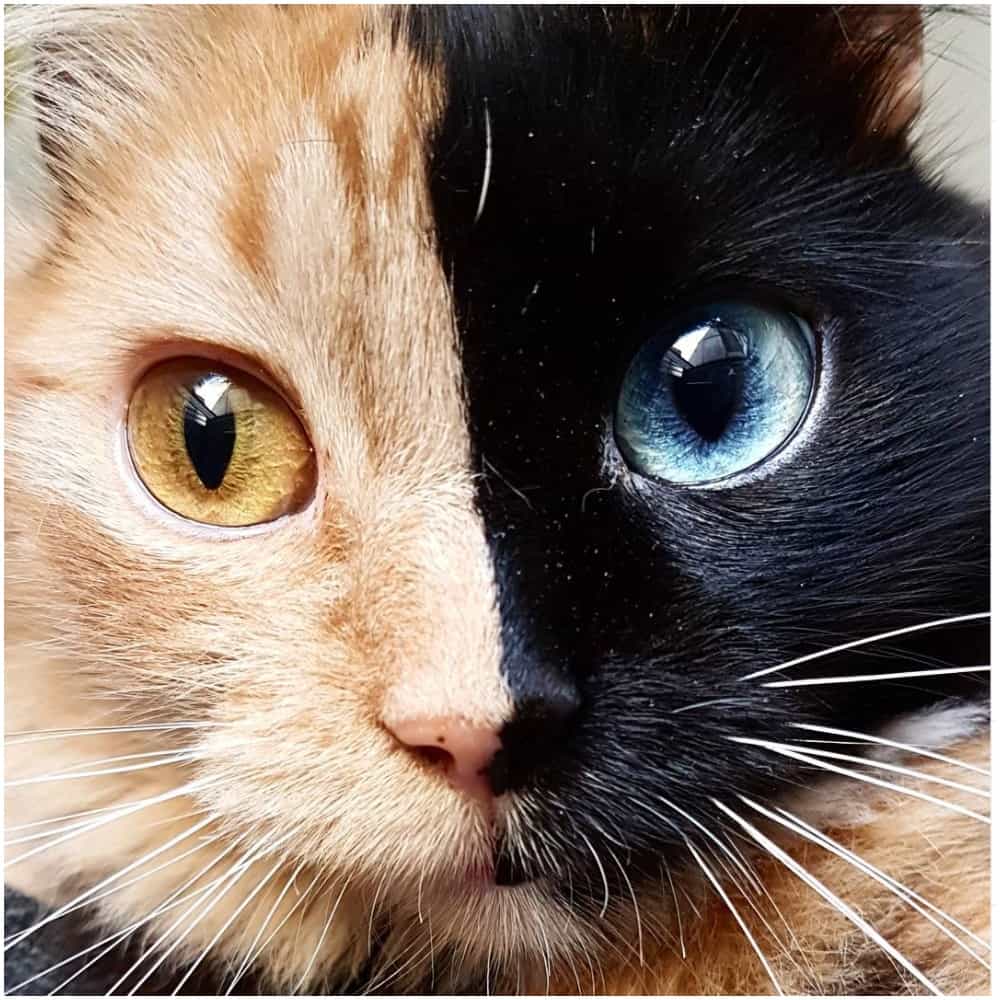 Basepaws, which are responsible for the world’s very first cat DNA test just for felines, tells us exactly what causes these super cool coats in cats:

In animals, chimeras are formed from at least four parent cells. They can occur after either two fertilized eggs or two early embryos fuse together into one organism. Thus, an animal chimera will carry two or more genetically distinct populations of cells, originating from different zygotes. Each population of cells keeps its own genotype and its own characters. This results in the formation of a mixture of tissues. During organism development, there is a chance that entire organs will possess different genotypes. For example, the animal can end up with one organ solely composed of one population of cells, and another organ completely built from the other population of cells. 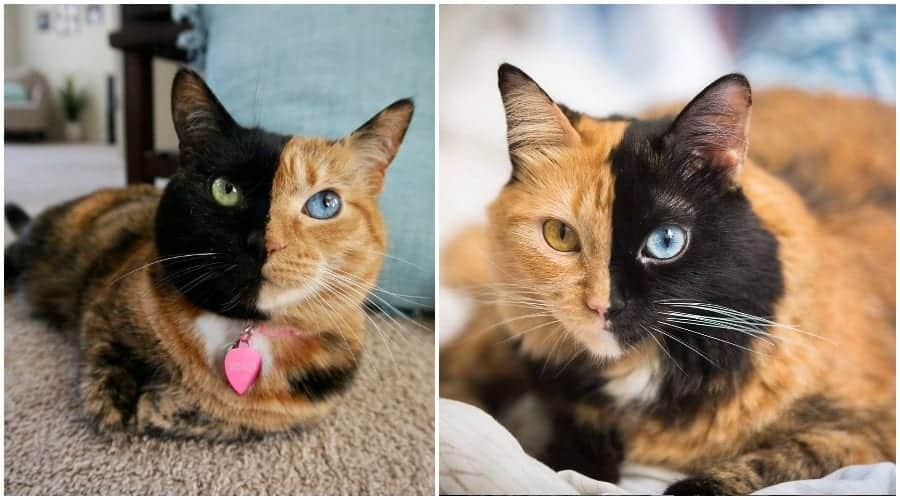 Chimeras are made up of cells from at least two different original embryos. If the early embryos fuse together, they become a single organism whose genetic input comes from two completely different individuals. If two or more genetically distinct cell populations emerge in the same zygote, then this condition is called a mosaic and not a chimera. This is because all the cells originate from the same original organism that genetically diverged due to genetic mutations. They don’t come from two different individuals. 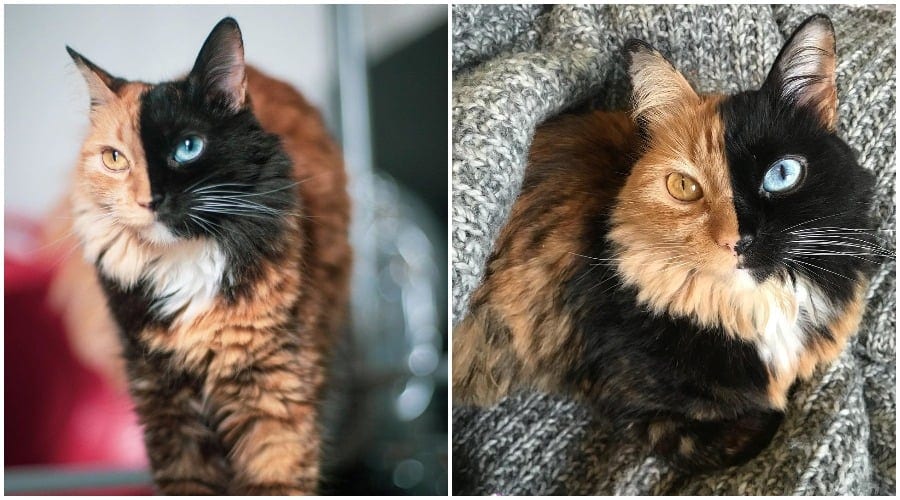 Want to keep up with this two-faced beauty on social media? You can find Quimera on Instagram here; on Facebook here.

Want to see some more cool cats with odd-colored eyes? Check out Bowie, Olive, and Iriss and Abyss! 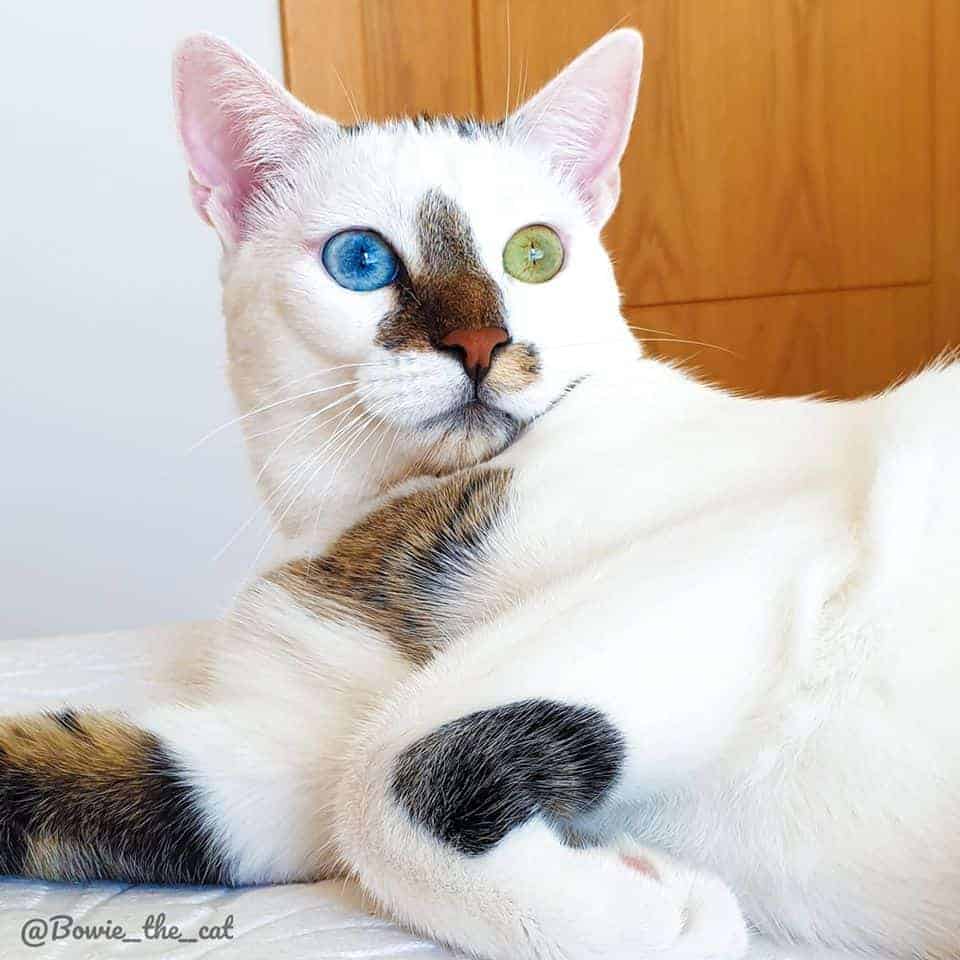 Discarded Kitten Born Without Eyes Gets A Second Chance At Life