Meet Tips And Toes, Two Tuxedo Brothers With A Love Of Adventure

If you’re reading this, chances are that you’re crazy about tuxedo cats! And that’s a good thing if you ask me, because these fancy felines of the cat world are in a class all their own. Known for their cattitude and their fun-loving personalities, tuxedo cats are just super cool. For Tips and Toes, they are two tuxedo cat siblings that found their way to a forever home together. And shortly after landing their forever home, their quest for adventure was awoken! Together with their humans, they love to explore the great outdoors from the safety of their leashes and harnesses.

Everyone, meet Tips and Toes, two cool cats who are not your average scaredy cats—they’re thrill seekers! 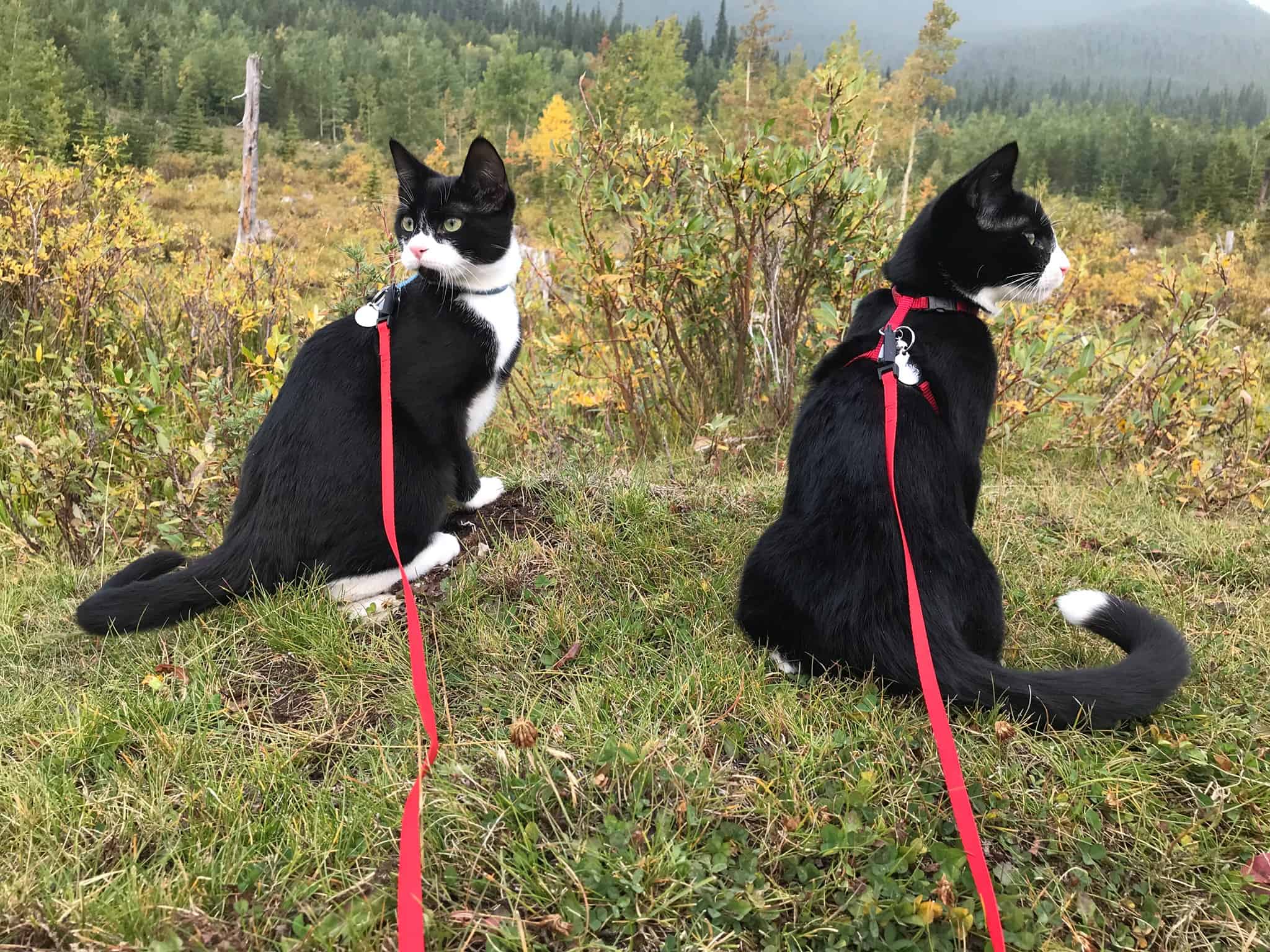 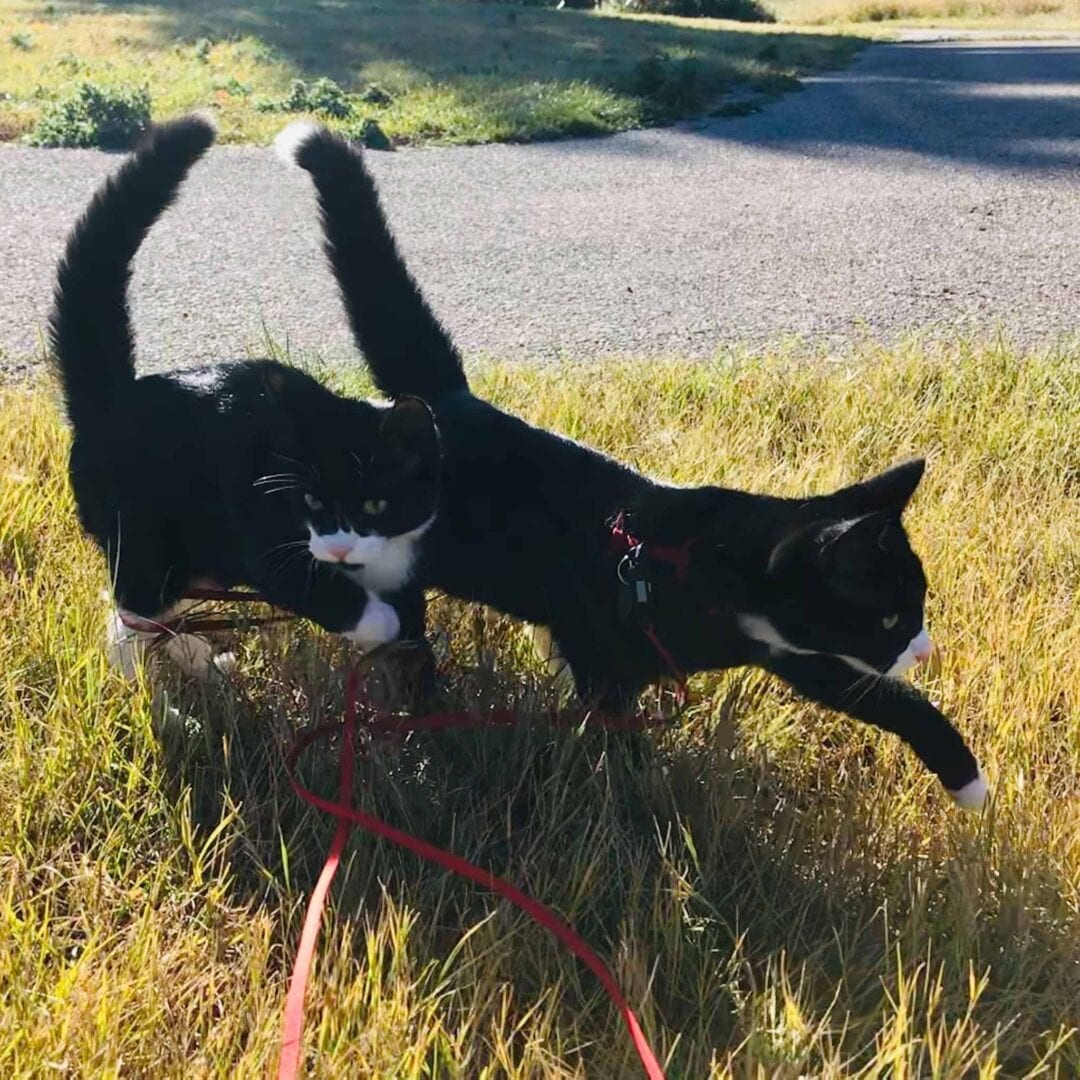 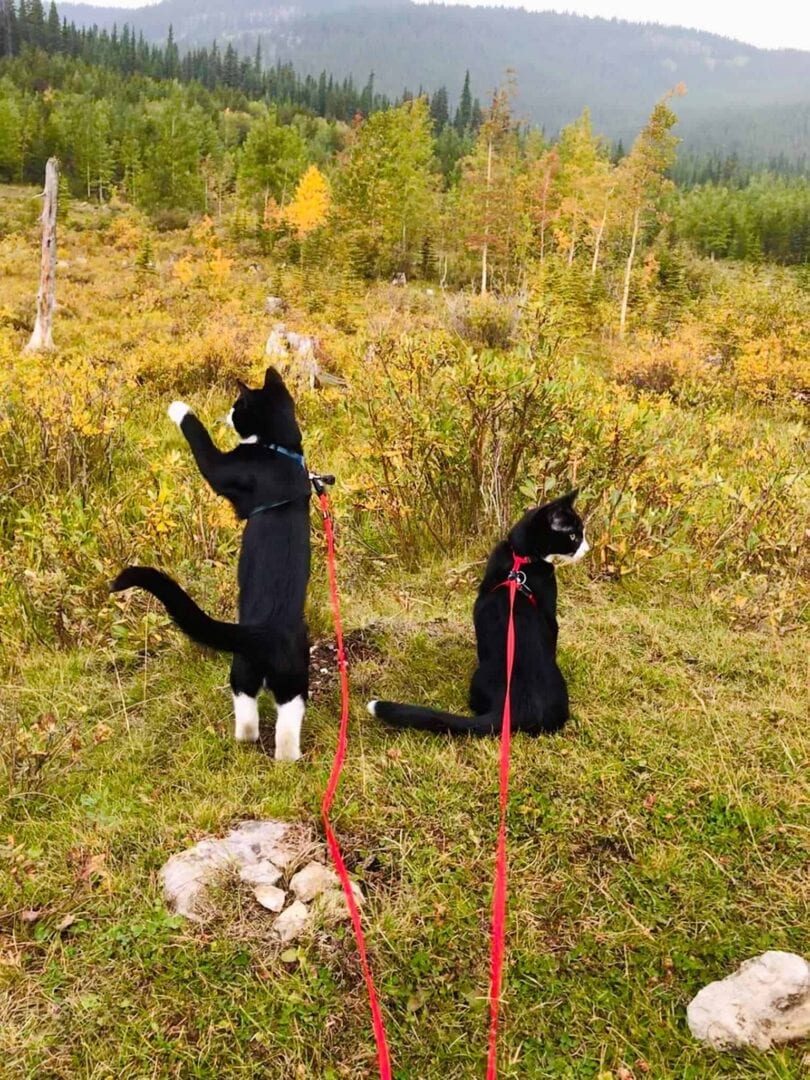 I caught up with their owner, Tanya, with some questions I had for her about this totally adorable twosome, so keep reading to learn more about these twinning adventure kitties.

1. How did Tips and Toes come into your life?

This summer while on one of our many camping excursions my nine year old joined in the conversation with a rancher friend. She eagerly told how I didn’t say no to getting a cat eventually, because we cannot have a dog where we live now and she described the lengthy list of stipulations I had made. (Between 4/5 months old, had to need rescuing, had to be black and white or grey, had to be a known snuggled, purr lots, be litter trained, good with other animals…) I had thought that this time instead of being the mom that says no I’d make a nearly impossible to find kitten the only option. Turns out our friend had stopped at a neighbouring farm on her way and had met a little black and white barn kitten who loved snuggles and purred louder than his size! He really liked people and wanted to join them in the house, or anywhere they might be working, even if it wasn’t safe. I agreed to look at a photo and find out more info.

When we all were back in cell range I received this photo of Tips (formerly Tippy)! 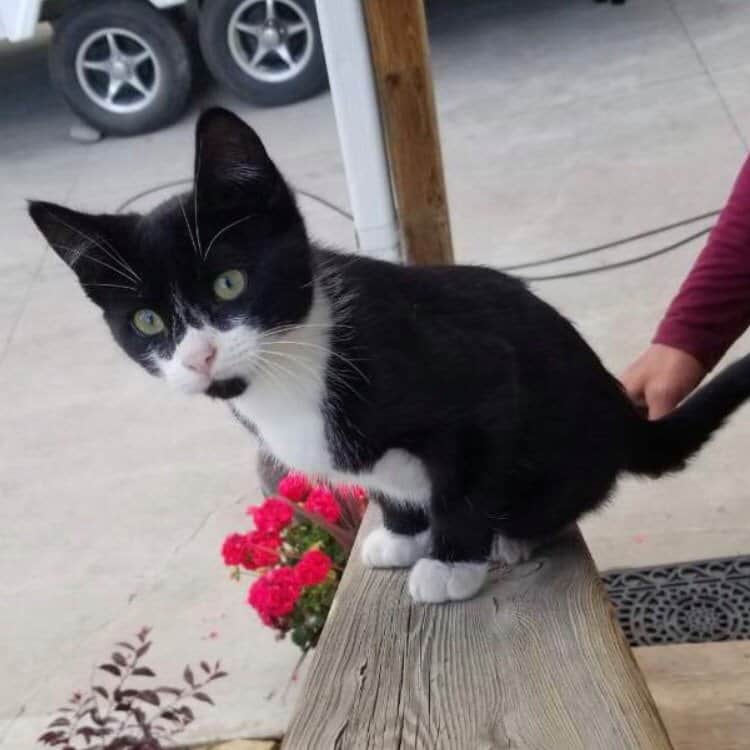 My kids saw the photo and fell in love! Honestly so did I! So I made arrangements, after my final backcountry camping trip of the year, I’d make a detour and stop at her farm and bring home this cute kitten, she’d pick him up and make sure he was litter trained… A few days later I received a text asking if I might want another kitten as she remembered I had talked about getting two from the same litter. I had been joking I should go from 0 to crazy cat lady overnight and just adopt a few. I’d never had a pet cat, but everything I’d read said cats benefit from being in pairs. Long story short, she sent this photo of Toes (formerly Goat), and without my kids knowledge, I agreed to bring home the bonus kitty! (0 to crazy cat lady overnight actually happened!) 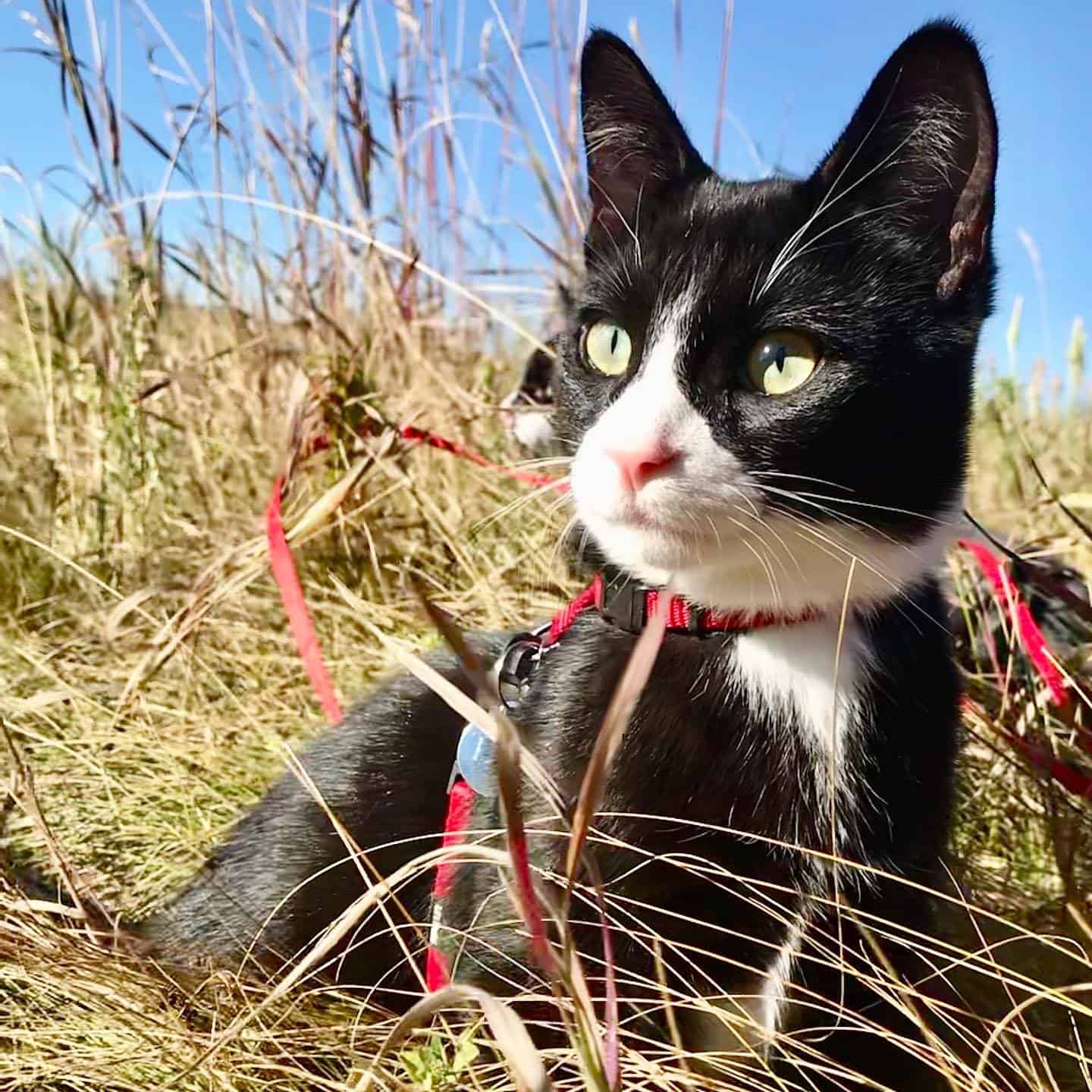 Tips is typically the calm brother. He purrs and meows like a much larger cat than his current 5 month kitten weight of almost 6lbs. He puts up with a lot of love and handling from his 7 year old human brother, and will even pretend to sleep through his feline brother’s sneak attacks. Tips can be found sleeping where he is not supposed to be sleeping, attempting to eat food that’s not his or trying to make friends with our beta fish or rescued dwarf hamster! He is usually the second cat out of the bag (backpack) or carrier, but is ever vigilant and always watching, and can play with the best of them. When he’s not in his harness and leash exploring outside, he enjoys laying on his humans and being carried around like a baby and purring. He’s the handsome observer who always has something to say. 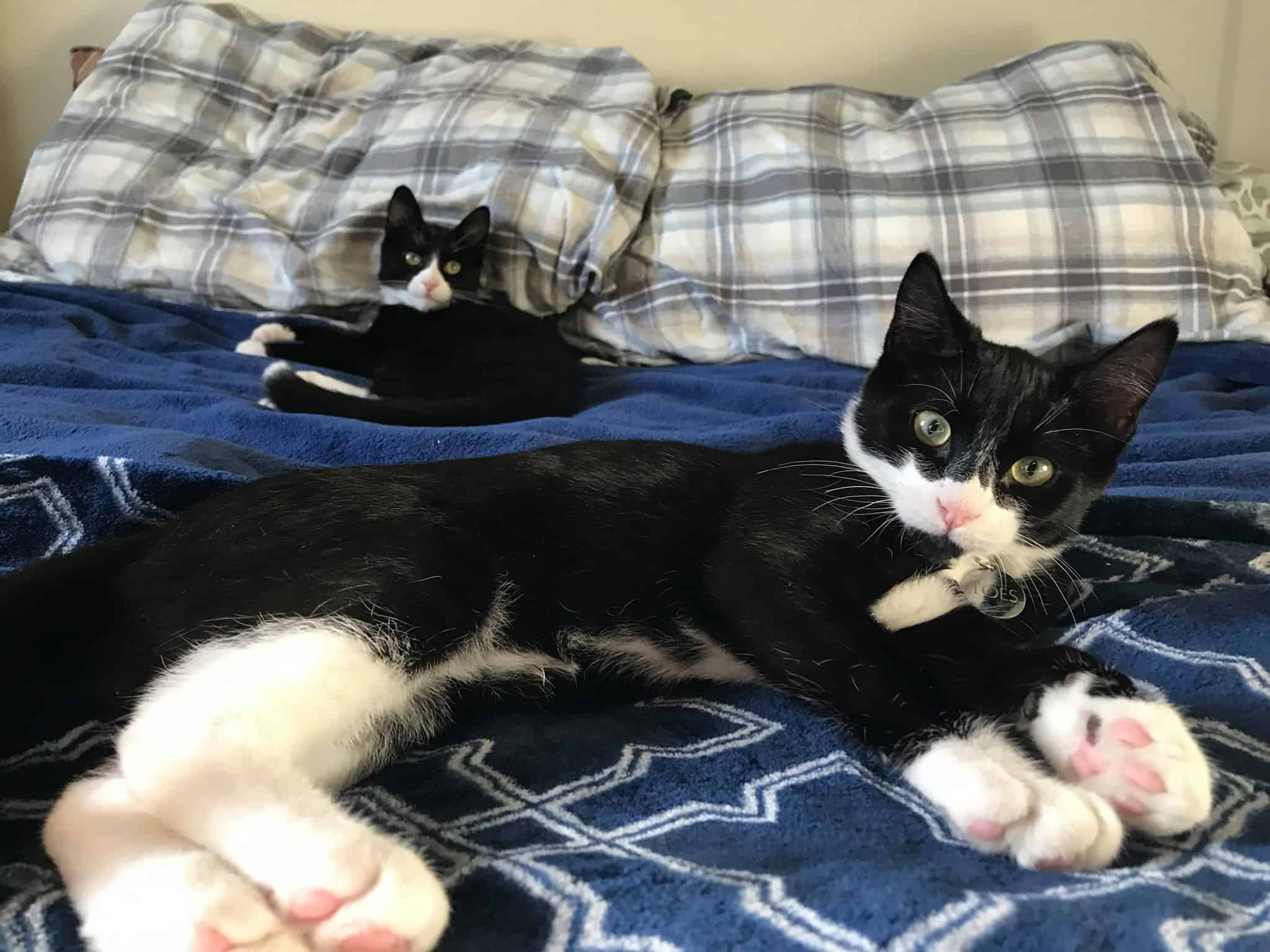 Toes doesn’t really meow, he chirps and squeaks! He’s more lithe than his brother and looks much smaller, but has been the same weight (and had the same heart rate) as Tips at each appointment. He’s the first kitten to charge forward into a new adventure! He was the first to make himself look big with a surprisingly fluffy tail when he smells a dog (or something unfamiliar) He enjoy stalking bugs, birds, his brother and human toes. He likes to dip his toes in water, and will reach his toes to boop his humans on the nose as he purrs through his luxurious snuggles. He’s the adventurous hunter, whose claws are definitely worse than his chirp! 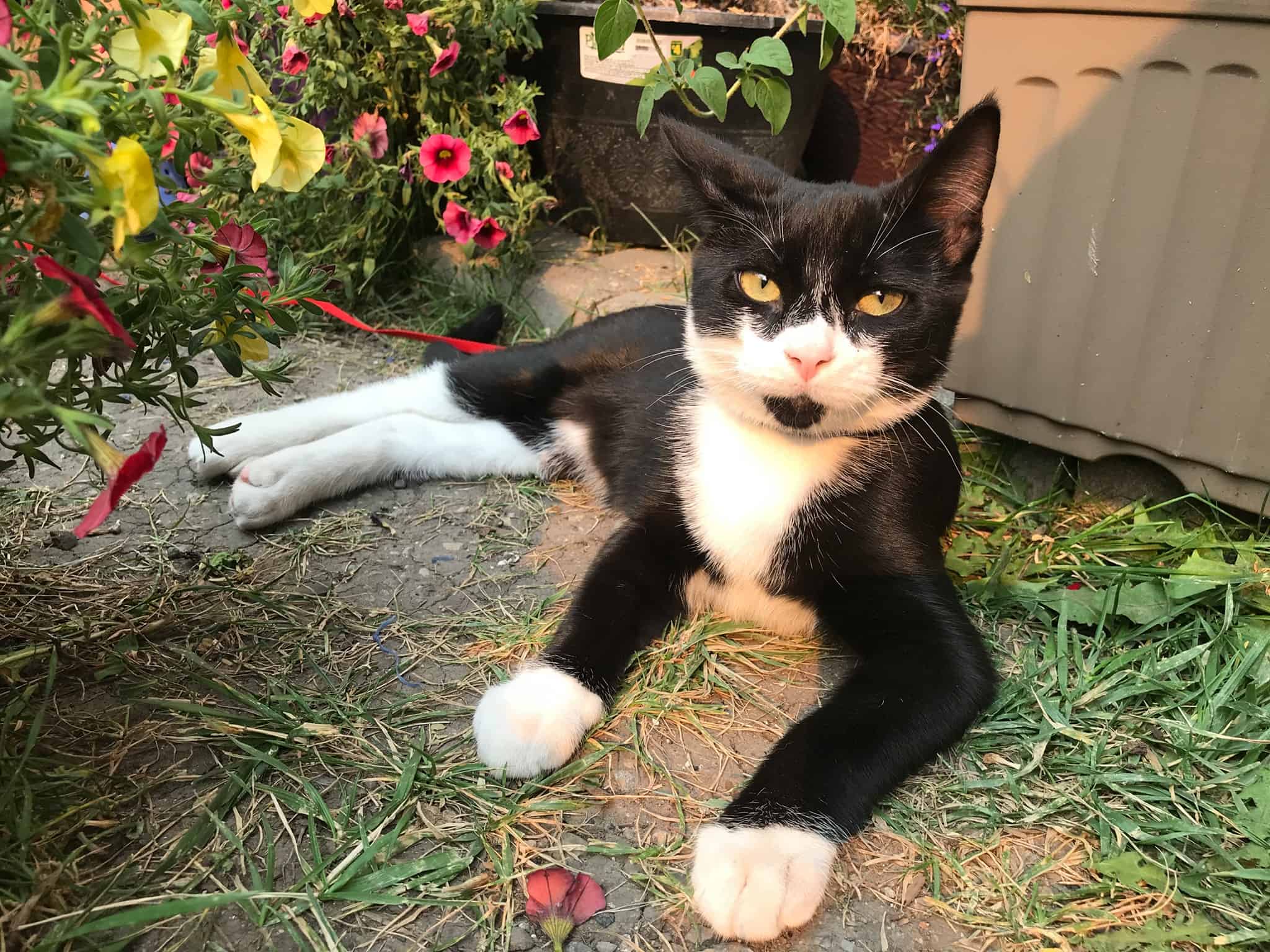 3. When did you start leash training them?

I picked them up late on a Sunday and began harness and leash training on Monday morning. My kids and I do a lot of camping and hiking and want to include Tips and Toes, so I’ve been working on adventure training since day one. I was just going to try the harnesses indoors to start, but both kittens behaved no differently, it turned into leash walking in the garden within 10 minutes. After two days of training, both kittens came running when they heard the jingle of their harness bell, after three they began sitting near their harnesses if they wanted to go outside. We began backpack training at the same time. Both kittens love their backpack and can often be found snoozing there when it’s left open on the floor.

4. Where are you guys located, and what places do they like to explore with you?

We’re located in southern Alberta, Canada. We enjoy the foothills and nearby Rocky Mountains, and Fish Creek provincial park and Weaselhead park within the Calgary city limits. They go to stores and for walks in their cat backpack as well. 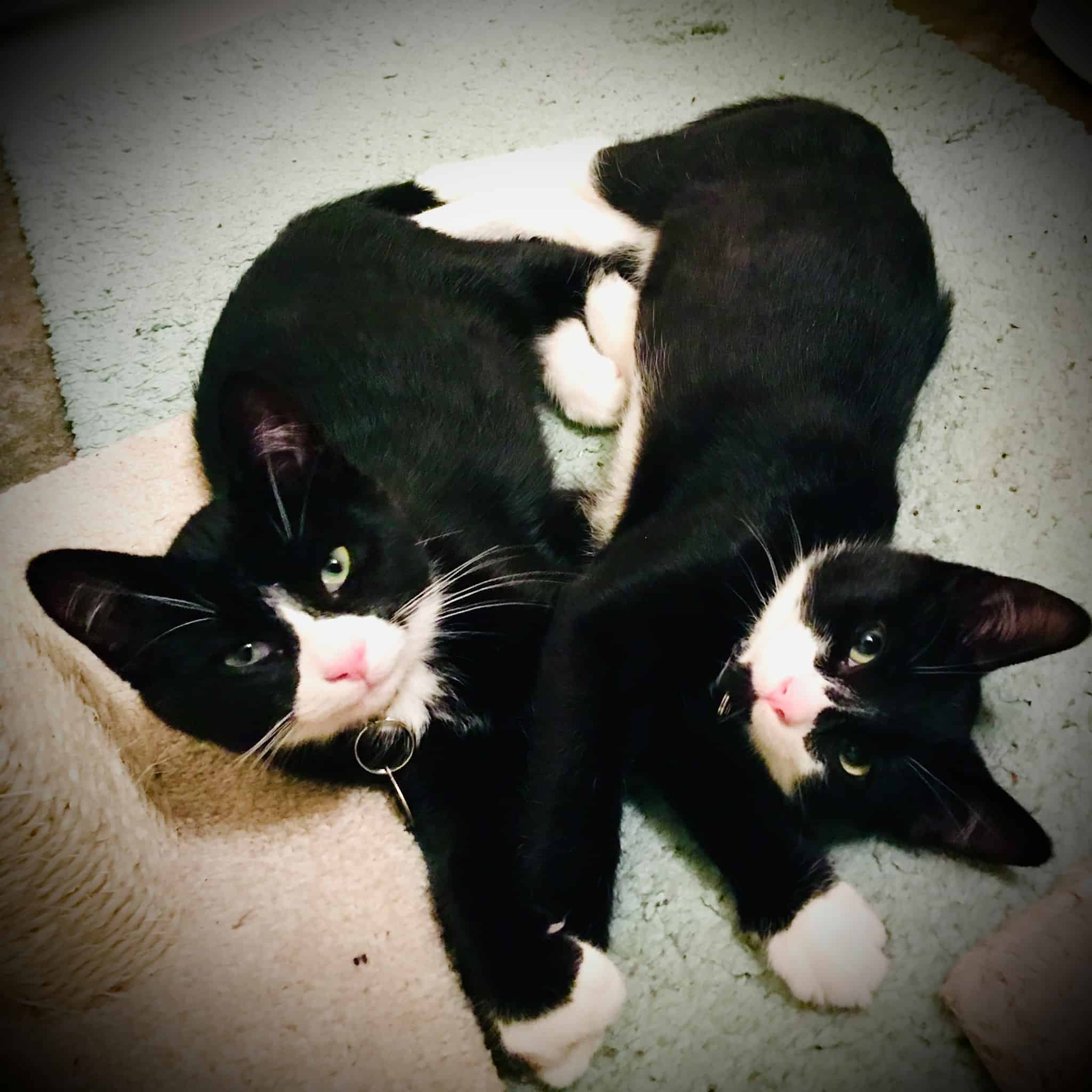 5. What’s something special you’d like people to know about Tips and Toes?

Tips and Toes have changed my view on cats! After being a lifelong dog lover and never having a cat in the home it’s been a steep and wonderful learning curve to invite these two into our family. Something special I’d like to share; Tips and Toes are not just adorable brave adventurous kittens, they’re intuitive healing kittens. About a week after they came home, there was a drastic barometric pressure change that induced a migraine. Both kittens appeared within moments of the onset, laid down around my head and purred their hearts out for 15-20 minutes. The pain didn’t reach it usual level, and it subsided much quicker than usual. These two are five months old as of yesterday, and I cannot wait to see where this journey goes with Tips and Toes my little Tuxedos!

Can’t get enough of these two cool cats? Keep up with them on Facebook and Instagram to fill your feed with their adorable antics. I’d like to give a special “thank you” to Tanya for allowing me to share their story and photos with y’all. If you know someone who loves tuxedo cats, don’t forget to share this cute duo with them! 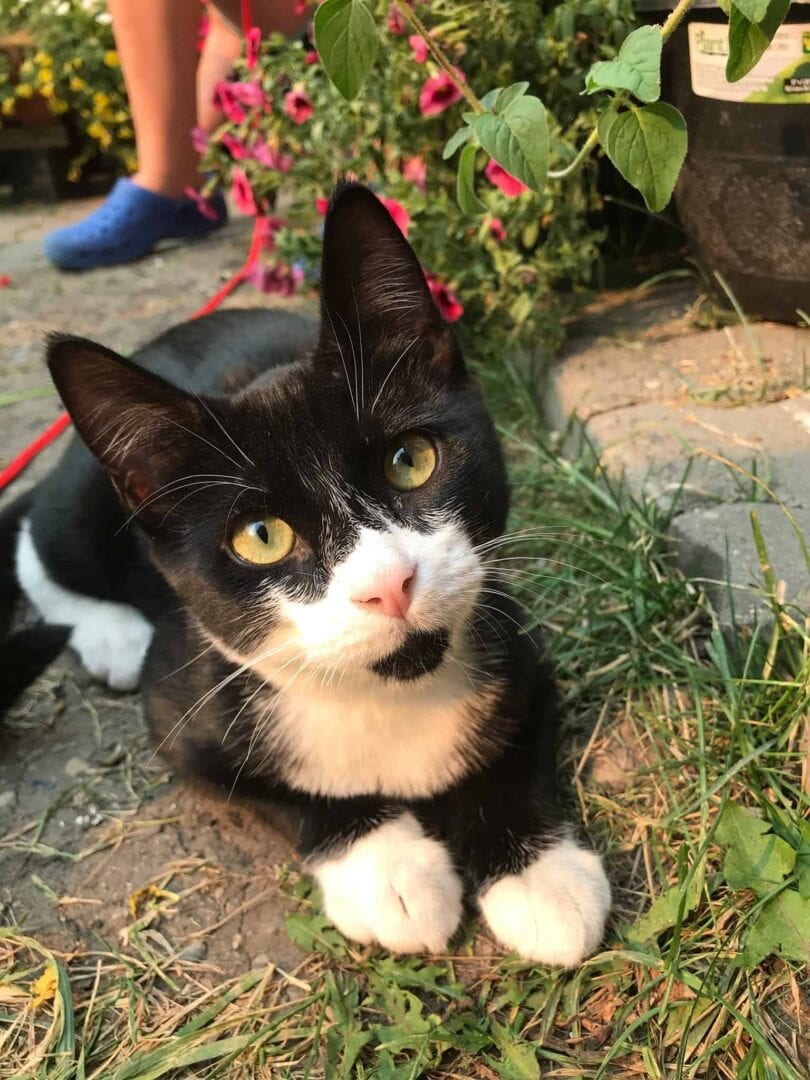 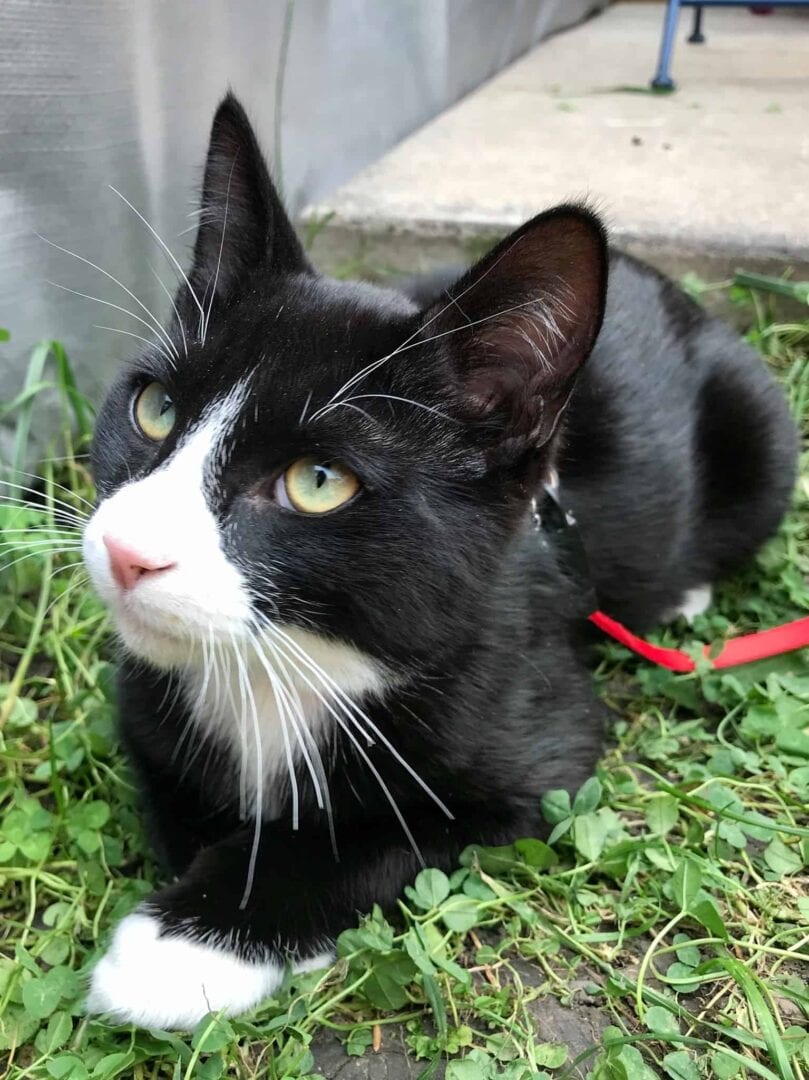 All Images Courtesy of Tips and Toes the Tuxedos on Facebook

Are you crazy about black and white cats? Check out this fun video from the Cattitude Daily YouTube channel to learn some interesting facts about these two-toned cuties of the cat world!

Once A Lonely Alley Cat, Now Mr. Hobo Highwaters Gets A Chance To Shine