While we know that Maine Coon cats are big, bold, and fluffy, there’s another cat breed in the feline world that’s just as mighty. So much so, that they were said to be the cats of the Vikings! Who are we talking about? Norwegian Forest Cats!

From those fluffy bodies and tails to the big paws and wedge-shaped heads, the Norwegian Forest Cat, AKA “Wedgies”, are beloved by many cat lovers around the world. Here I’ll cover some fun and interesting facts about the breed so you can add it to your budding index of feline knowledge. Enjoy, cat lovers! 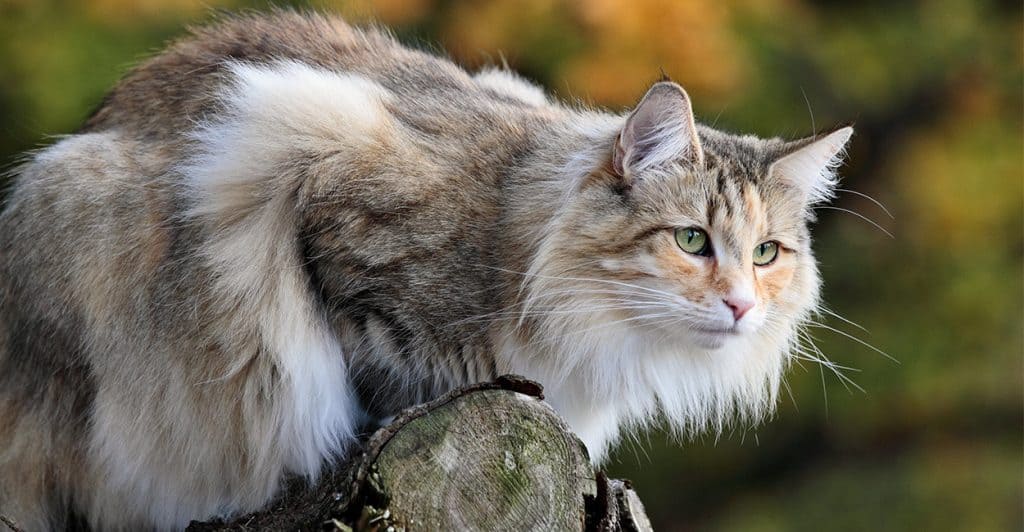 In case you’ve ever picked up a history book or caught an episode of History Channel’s hit show Vikings, then surely you know just how fearless, brave, and strong the Vikings once were. For Wedgies, these cats are natural athletes and hold the crown as the official cat of their namesake. (So, if you ever happen to get one of these cats, Ragnar or Lagertha is certainly a suitable name for your Viking cat!) It’s believed that this beautiful breed first arrived on the East Coast of the United States with Lief Erickson or his contemporaries.

Fun Wedgie history fact: the late King Olav V of Norway is the one responsible for anointing the Norwegian Forest Cat as the National Cat of Norway.

The Cat Fanciers’ Association details that “these cats have developed over thousands of years of natural selection into a breed able to survive the long harsh winters of Norway.” That long, luxurious coat of theirs serves a definite purpose, and if not for its durability, as well as their superior hunting skills, the Norwegian Forest Cat we know today would be nonexistent. Even today, there are still some free-roaming Wedgies roaming the forests and farms of Scandinavia. These cats were born to survive the elements—and it shows! This breed of cat is naturally occurring, and despite their striking appearance that sometimes resembles that of a wild cat species, they do not have any wild or hybrid DNA in their lineage. It is estimated that Norwegian Forest Cats probably arrived in “Norway from Europe, descendants of domestic cats introduced to northern Europe by the Romans.” Norse mythology makes mention of many longhaired, large breeds of cats, and these “Forest Cats” are often prevalent in many ancient Norse legends and stories. Across all of Scandinavia, the Norwegian Forest cat plays into much of the culture, history, and legends. While their true origin remains a mystery, it is believed by many that these cats were brought by the Vikings. And these cats didn’t simply sit around and look pretty. The Forest Cats were brought on the ships for their natural athleticism which made them skilled rat catchers. As we know, rats can often carry infectious disease, so these working cats served their leaders well.

Norwegian Forest Cat name fact: In Norway, this national kitty is known as the Skogkatt, which literally translates to Forest Cat in Norwegian. The Difference is in the Head Shape

Many of us are familiar with the Maine Coon, but oftentimes Norwegian Forest Cats are easily confused with this other breed of large cat. Yes, both have large bodies and long, fluffy coats, but with the Norwegian Forest Cat, their heads are less blocky and more triangular shaped. For Wedgies, their heads are a true equilateral triangle where all sides are equal when measured. A Wedgie will also have a nose slant and their eyes are often slanted as well. The Maine Coon appears more lion-like with broader features as shown below. 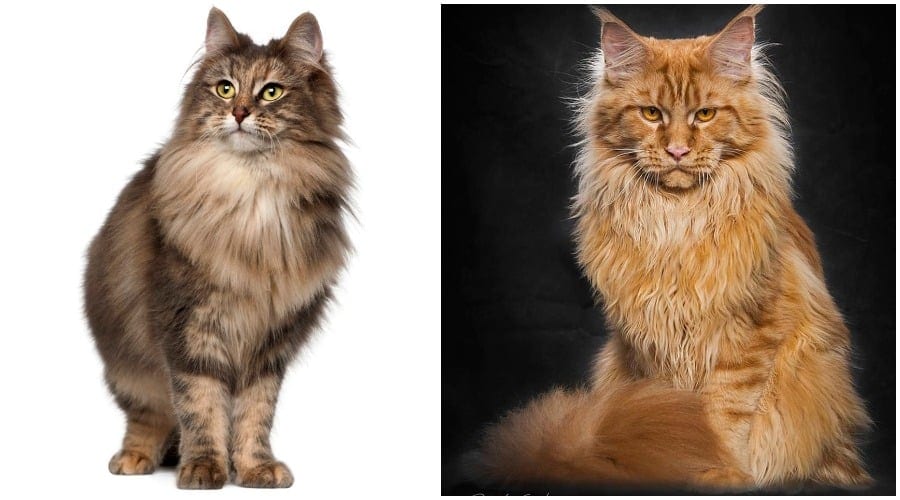 Two cats in one: The coat of the Wedgie differs greatly depending on the season. In the winter, their thick, dense double coats are full and fluffy. In the summer months, they lose much of that cold-weather protection to reveal a much shorter coat. But you might be surprised to know that although they have majestic fluff for days, their coat care is relatively low maintenance in comparison to other long-haired cat breeds like the Persian.

The Wedgie is a hardy breed of cat. In addition to their thick double coat, their long ear furnishings serve to protect their ears from the chilly temperatures. And that glorious coat of theirs is even equipped with water-resistant guard hairs that deflect moisture to keep them nice and warm. 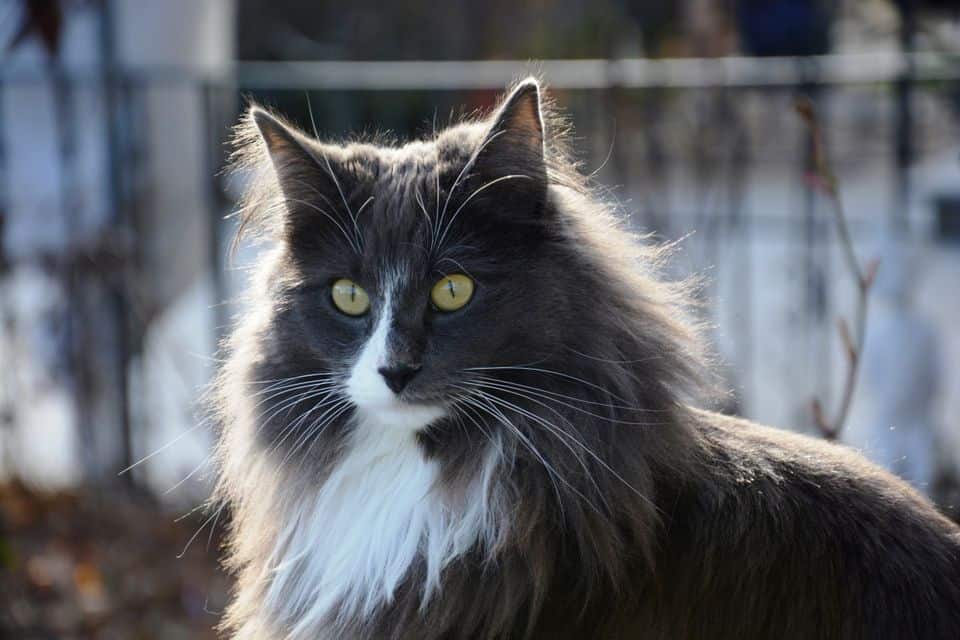 A Heart as Big as Their Size

Don’t let their impressive history or athleticism fool you, these big kitties enjoy being around people, and are as social as they are intelligent. Many owners of Wedgies report that their feline friends are loyal, affectionate, and playful. These kitties very much enjoy a good climb, so a climbing perch is essential to keep them truly happy around the home. The Wedgie loves to perch themselves high to observe their world below—even if it’s just the comfort of their own living room! 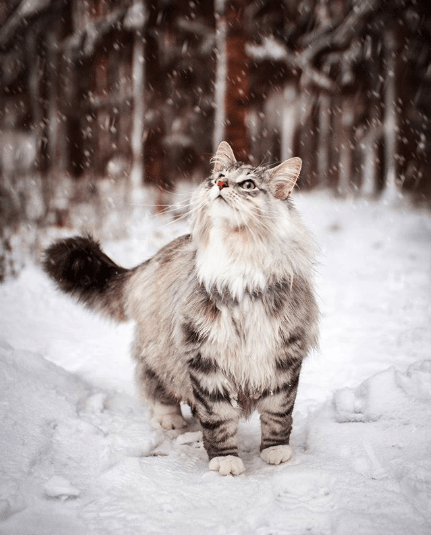 Want to check out a super cool Norwegian Forest Cat on Instagram? Aslan the Wedgie cat is super gorgeous and you’ll love all the breathtaking images of him exploring the great outdoors of Sweden!

Do you have a Norwegian Forest Cat in your life? Share with us in the comments section!

Rescue Kitten Joins The Ranks As Official Officer In Arkansas

One Brave Cat Faces Off Three Coyotes Like A Total Badass

Do Ragdoll Cats Actually Go Limp When You...