Why Your Cat Sleeps On Your Head, & Other Odd Cat Behaviors Explained!

I don’t know about you, but I just love cats and all the weird things they do. And really, to a cat, these behaviors are not weird or silly. It’s just how their little feline mind works. I’m not saying that you have to become a cat to better understand one. You just simply have to think like one. And don’t worry, I’m here to show you the ways of the feline mind. Here’s a fun collection of silly cat behaviors explained, like sleeping on your head, that little bread loaf position we all adore, plus a few others! Let’s go… 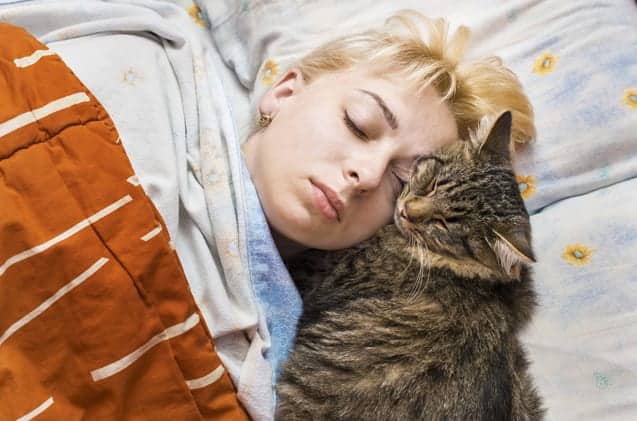 Why does my cat like to sleep on my head?

Okay, I will admit, not every cat does this. But some do. And when they do sleep on your head, they REALLY sleep on your head. Oddly enough, my Maine Coon mix, Mr. Purple, will do this, and with all that hair of his, it makes it a bit difficult to breathe, let alone sleep. But just as cat owners do, I let him do it because I love him and it makes him happy. But do you know why cats sleep on your head? Well, there are two reasons, actually. The first reason being that this is the warmest part of your body where heat escapes from. And as we all know, cats simply love to be warm. The second reason? Because cats do not like to be disturbed when they’re sleeping, and your head is much less likely to move versus your arms and legs. Some also speculate that your cat likes the smell of your shampoo, but I’m not too certain on that one… 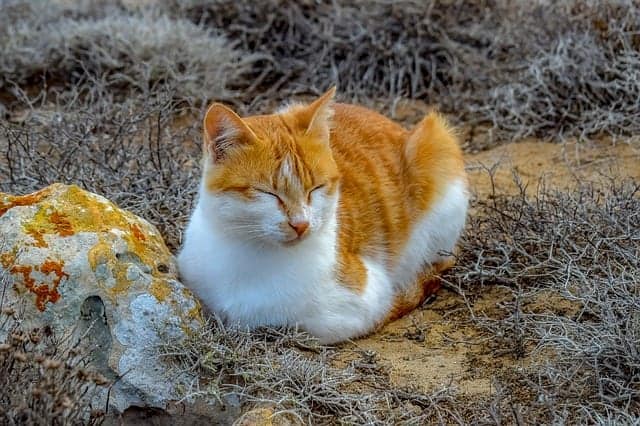 Why do cats love to make our cat-lover hearts skip a beat with the bread loaf position?

Cats will sploot which is simply magical, but that bread loaf position that they do is pretty darn cute, too. When your cat sits in this position, with their feet tucked under them, observe their facial expression. Oftentimes, your cat is in a relaxed state, so much so, that their eyes are partially to fully closed.

“Generally speaking, a cat who is lying with their paws tucked underneath them is considered relaxed. They aren’t preparing to defend themselves or run away.” — Mikel Delgado, cat researcher and postdoctoral fellow at the School of Veterinary Medicine at UC Davis

Being always on guard is the true nature of a cat, so for them to position themselves in a bread loaf position ultimately means that they do not see or sense any potential dangers surrounding them. Therefore they position their bodies loafing style as to relax. 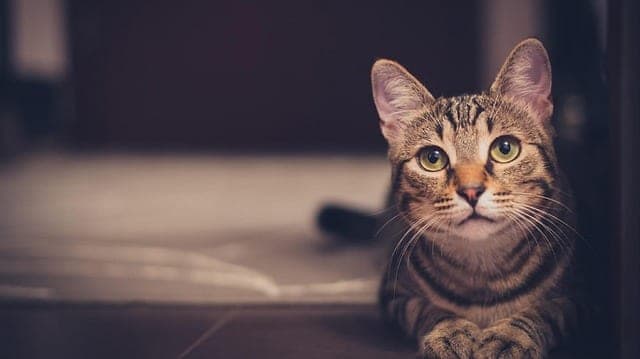 Why does my cat follow me to the bathroom?

When we are in the restroom, we prefer to hang out there alone. It’s not exactly a social time for us excluding the mobile device that sometimes finds its way into the bathroom with us. Your cat, however, does not care what you are doing in there, and if you attempt to shut the door, this triggers their curiosity even more than usual. What is this strange contraption separating me from you? Are you coming back? Will you ever feed me again? The list is endless, really. And thus, triggers their odd cat behavior into overdrive.

By leaving the room to relieve yourself and putting a barrier between the two of you, this only intrigues your cat’s curious nature even more. Now, we would never go into our cat’s litter box while they’re handling their business, but I think it goes without saying that your cat just doesn’t care about your privacy. But in defense of felines, neither do dogs!

Remember, cats are “micro-managers” and they must know what is going on at all times. This includes you when you try and sneak off to the bathroom, human! 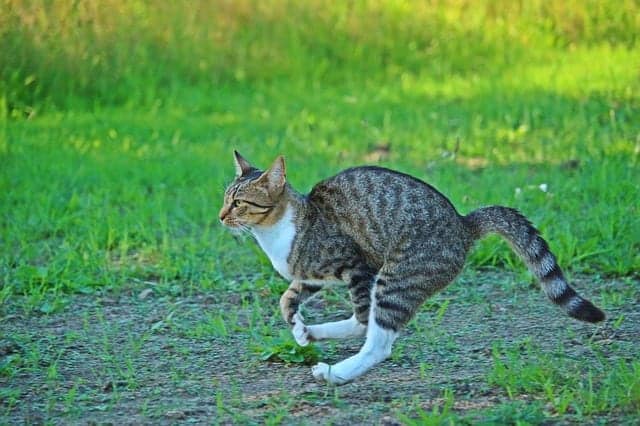 Why does my cat get the zoomies?

Dogs certainly do this silly behavior, too, but for them it’s generally following a bath. Also known as the cat crazies, this can happen after your cat goes #2 or simply just because. When it’s after they’ve had a moment in their litter box, it’s a chemical reaction that makes them excited for having just released a bowel movement. (That brain gut connection is a very real thing, even for cats!) But additionally, your cat is literally zooming away from that nasty poop they don’t want to be anywhere near. 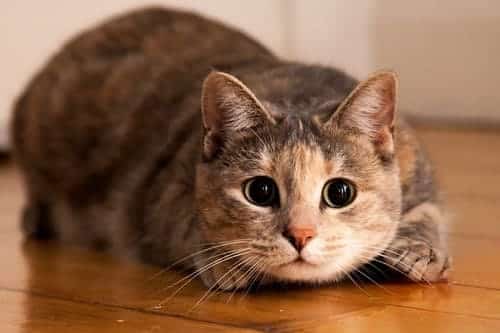 When it’s simply just because, and usually when you’re not expecting it, your cat may choose to release their pent up energy by way of going bananas all over your house. If you’ve returned home after a long outing, your cat can get the zoomies because they are naturally excited that you’re home and this has triggered their feline minds that it’s time to party! Most of all, your cat doesn’t care if you’re exhausted, they get the cat zoomies on their watch and you just better hope all the breakables are out of the way.

We can’t talk about cat zoomies without a good cat zoomie video!

Something to keep in mind, though, if your cat is yowling or angry when they are experiencing cat zoomies, this could be a cause of concern. If your cat is in pain, they act this way as a way to express their frustration. 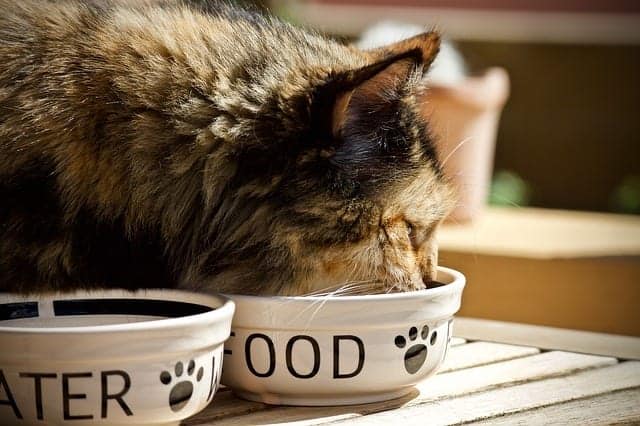 Why does my cat always act like they’re starving?

Oh, our cats have us so well-trained, don’t they? We all know how this goes: you feed your cat and they pretend that you haven’t. Or you’re sleeping, like dead asleep sleeping, and they sit on you meowing loudly to get up and feed them. BUT, there’s food in their bowl. You’re half asleep, scratching your head, shuffling back to bed. But not after you’ve given them more food, of course. 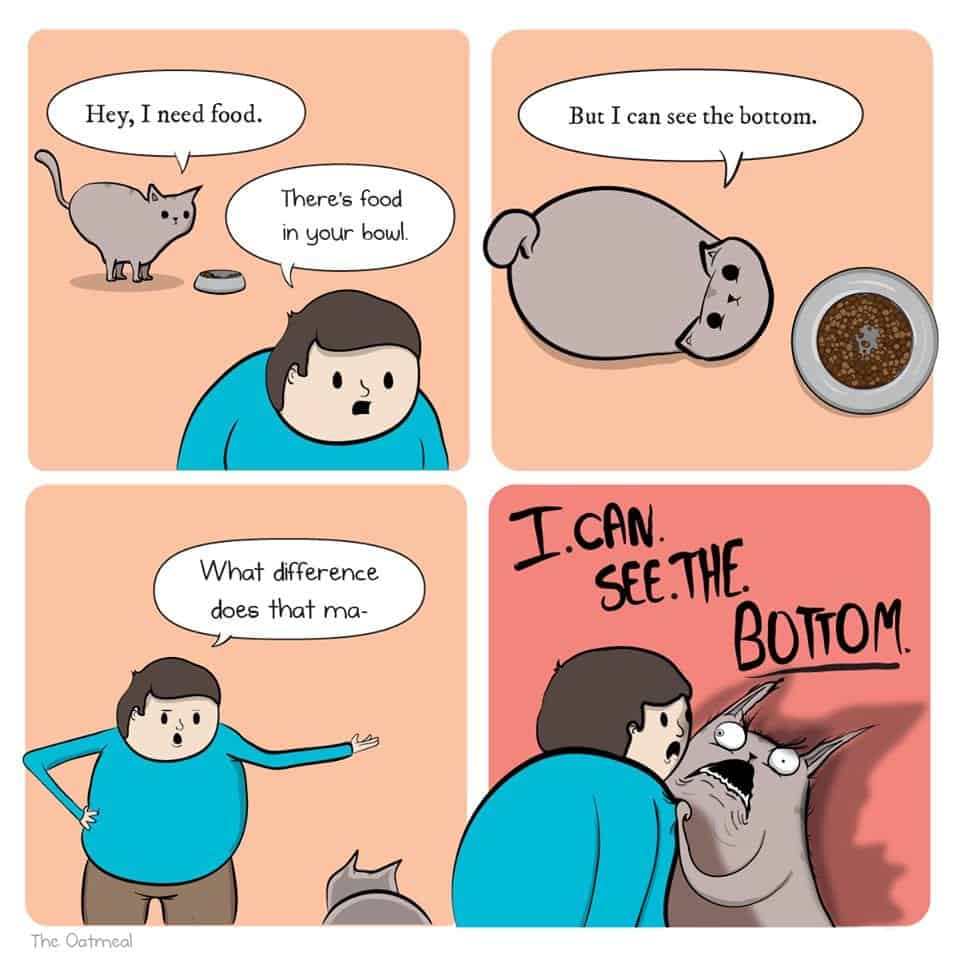 Cats seem to train us to feed them regularly at their demands for a few reasons. Your cat is all about cleanliness, and they’re all about freshness, too. If that food has been sitting out, your finicky cat might not want to eat it simply because it’s not fresh enough for their high standards.

There are a few more other reasons, though, for your cat’s demand of food. Think about the bowl that you are using to feed them, and now consider your cat’s whiskers which are embedded 4x as deep as their fur. These wispy receptors on their face are highly sensitive to touch, and your cat won’t want to shove their face deep to get food out and risk the discomfort. Additionally, your cat could be demanding more food if you’ve held out on the good stuff, such as a canned topping that goes on their dry cat food.

Did you learn anything new about cat behavior that you didn’t know before? Share this with your friends who love cats so that they can learn something, too! 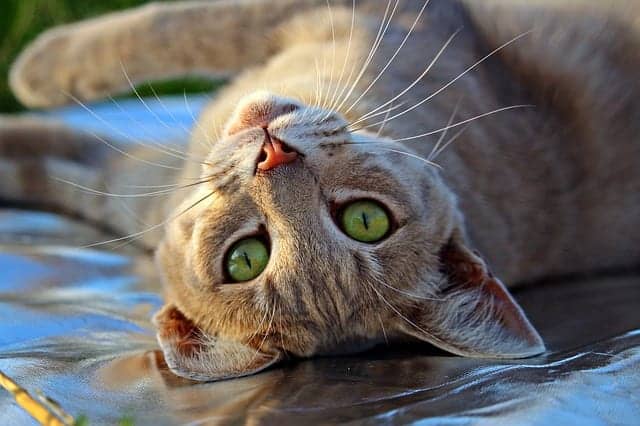