Meet Rascal Wild: A Spry Feline Who Got The Happy Ending He Deserves

For our feline friends, they don’t always have an easy start at life. And what’s worse is that many don’t always get that happy ending that they deserve. For one tuxedo cat in Washington state named Rascal Wild, he got off to a pretty bad start. He was picked up as a stray near a busy road and had trouble finding his forever home due to his rambunctious temperament. His owners told me that,

“I looked up the location where he was rescued on Google maps, and it was definitely no place for a cat! Multiple lanes of busy traffic, train tracks, and a cemetery. Maybe he was dumped because he was a wild big boy instead of a cute, cuddly kitten. Maybe, being un-neutered, he was looking for love in all the wrong places and his folks didn’t know how to find him. When he got to the shelter, they said he was feisty, off the walls energetic, mischievous and would get in trouble because he had not been taught hands aren’t toys.”

Here’s where Rascal Wild was found, definitely not a safe place for a cat! 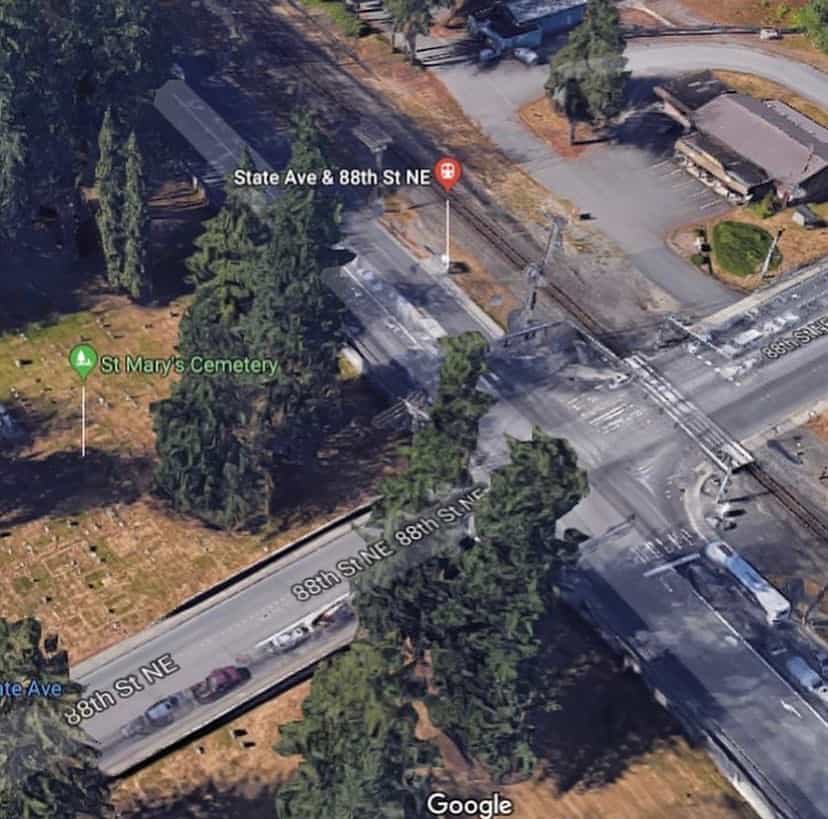 Thankfully once Jim and Cerise caught wind of his story, they were eager and willing to open their hearts and homes to this rambunctious kitty. To them, it didn’t matter if he wasn’t affectionate or a cuddler, because they knew instantly he was meant to be with them once they felt a connection with his story and photograph. And, as they say, the rest is history!

They started a social media account for their handsome boy, and over 30k fans and counting are super happy that they did! His bio reads that he’s: “A handsome cat in the Seattle area who lures people with his belly. Big brother to @poly_dumplings” 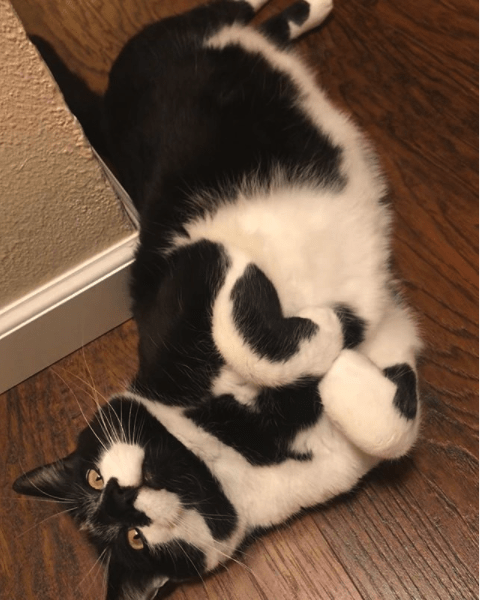 I connected with Rascal’s owners, and asked them a few questions which they kindly answered in detail for me. Keep reading to learn more about this spry feline who is a total prankster at heart! And he’s earned the middle name “it’s a trap” for his crafty ways of making you think he wants a belly rub only to surprise attack you. So, basically, he’s a professional belly trapper. 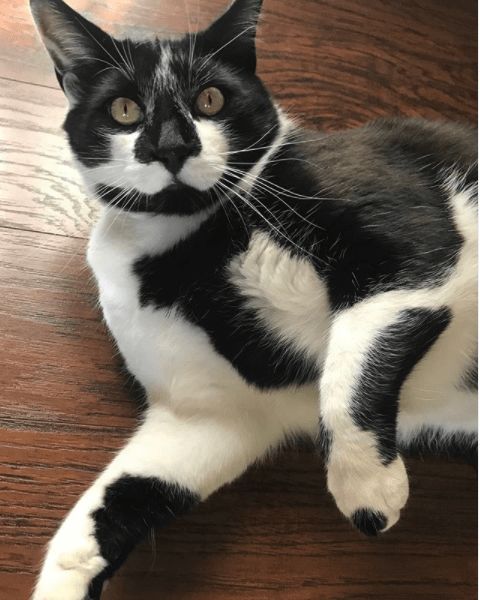 How old was Rascal when he came to live with you?

“When he was found, he was an un-neutered, stray boy and the shelter that took him in estimated he was 2 years old. (It’s possible he was a little younger than that, but nobody knows for sure.) He’s a mature seven year old now, having settled down a lot over the past five years.” 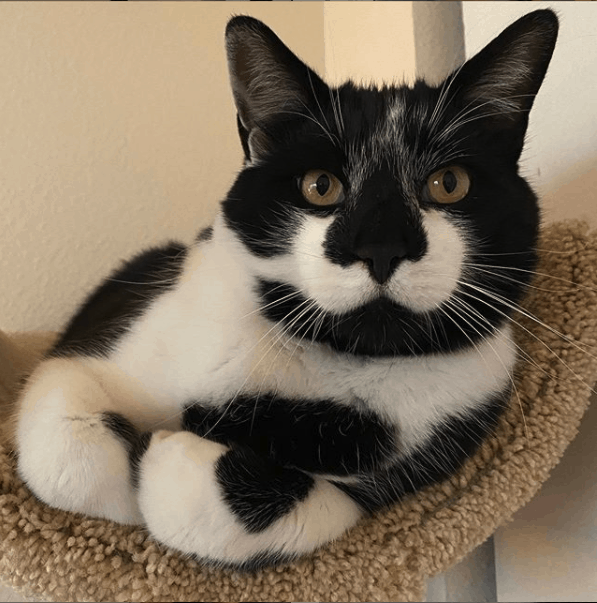 It seems that his name is perfect for him. What was his name when you first adopted him, and how did you decide on his forever name?

“Rascal was his shelter name, but it is very fitting as he is a rascal! We never thought twice about it.”

(A view of Rascal’s kennel card:) 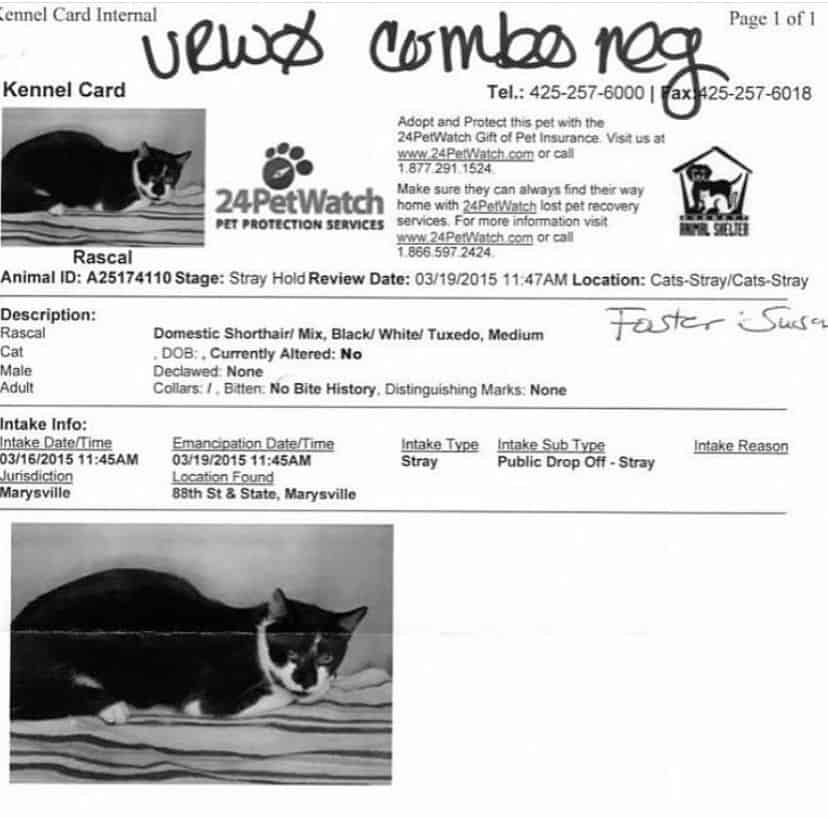 How does he get along with his cat siblings?

14 year old Jinxy: “They have a respectful standoff. She would probably prefer to be an only cat but she secretly loves them all!” 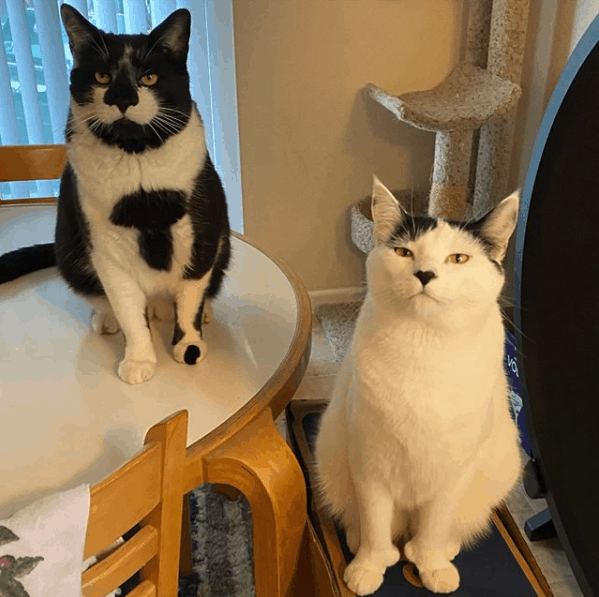 Here he is, kicking it with his cat mate…and begging for chicken.

2 year old @poly_dumplings: “We adopted them when they were kittens and were scared how he would react and took introductions super slow. He would growl and hiss at their room, and they didn’t meet face to face for 6 weeks. Fast forward, and now they are best friends. He has personal groomers and playmates. He rough and tumbles with Gyoza and tiny 8 pound Gnocchi chases this big boy around. We couldn’t have gotten a better fit for our family. Plus, they all look great together!!” 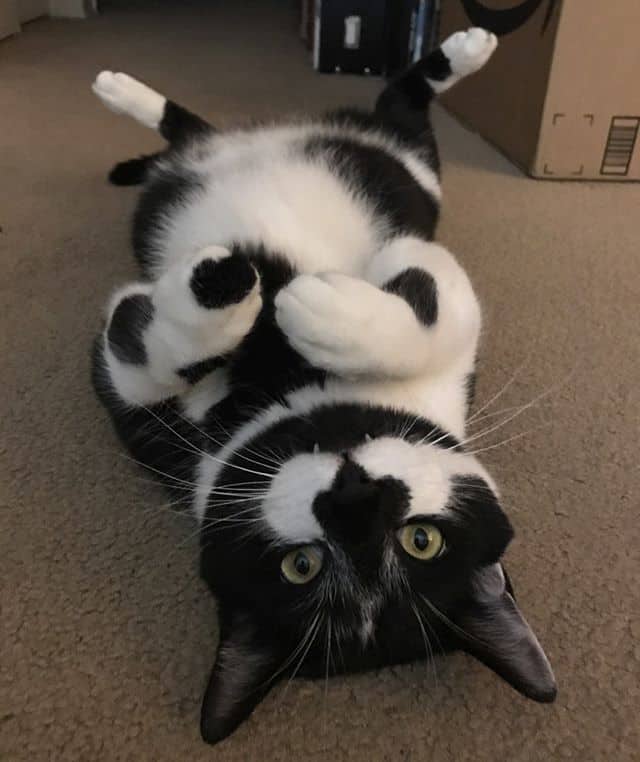 What’s something special you’d want people to know about him?

“He’s not trustful of humans, but once you earn his trust, his love is unconditional. He has a secret sweet side that offsets his wild side, and a big gigantic purr.” 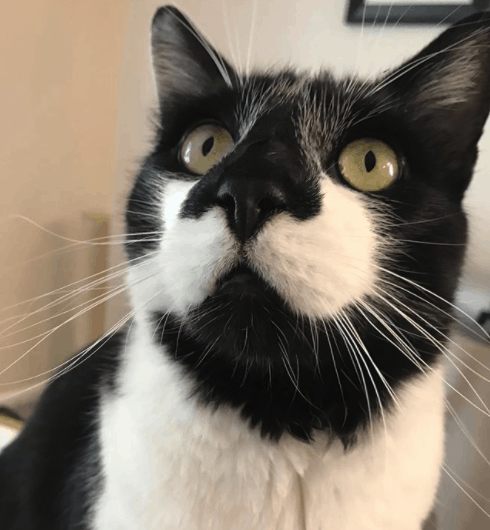 They say that tuxedo cats are famous for their cattitude. How would you rate Rascal’s cattitude on a scale of 1 to 10 (10 being highest)?

“12! When he first came home he was extremely energetic and loved to ambush and bite us. Now, he loves to be brushed and petted when he’s in the mood. He can get overstimulated and may nip to let us know he’s had enough attention for the moment and wants some personal time.” 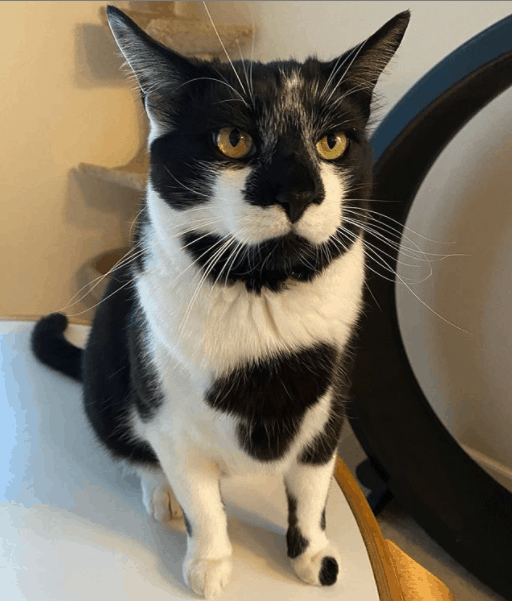 And if Rascal looks like a big boy, that’s because he is! He tips the scales at 20 lbs, but that should come as no surprise since many tuxedo cats are large and in charge.

Can’t get enough of Rascal “it’s a trap” Wild? Me neither! Keep up with his crazy cat antics on the daily on Instagram.

Here he is, trying to sucker his humans in for a belly rub—but they know better because those murder mittens will come out. (Funny, my tuxie does the same thing!) 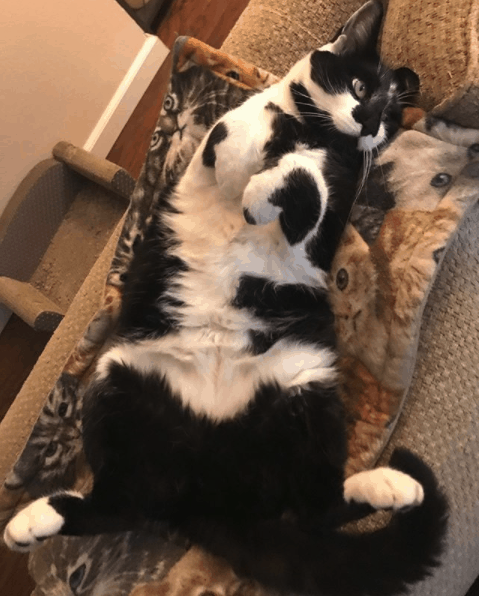 Don’t forget to check out his cat housemates’ Poly Dumplings, AKA Gyoza & Gnocchi. If you’re a sucker for cute polydactyl cats, then these two cuties are right up your alley! 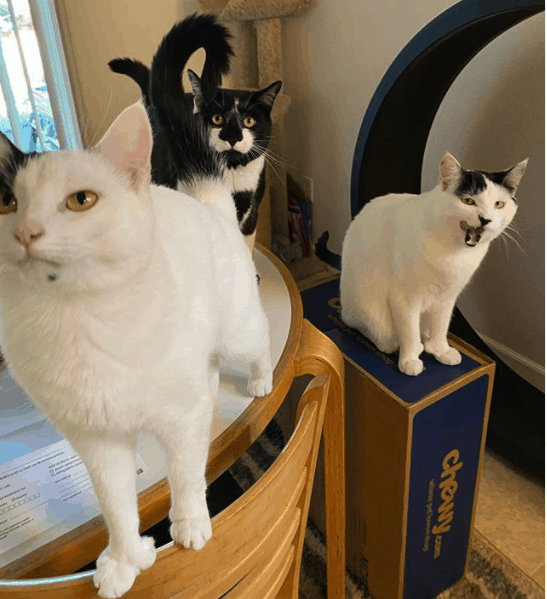 Cat And Owner Reunited After Decade Apart Thanks...

Formerly Neglected Cat Loses Her Sight, But Not...