All of my cats were rescued. And two of my cats were adults when I rescued them. We can’t help but think sometimes about whether our cats remember their previous owners. And this is especially true for older cats. Cats are often rehomed for various reasons, and many times it’s very hard for them to adjust to their new lives. Garfield in the UK is proof of that.

Garfield, a gorgeous ginger tabby, was recently rehomed by Neil and his wife, Leasa, after their children moved out of their home. I’m not here to judge their actions. And I’m sure in their own minds they had legitimate reasons to think that Garfield would have a better life with his new owners. Neil and Leasa knew the family Garfield moved in with, and they were located roughly 40 miles away from them.

But Garfield had news for his new owners. His stay wasn’t going to be a permanent one. On June 20, 2020, he vanished. No one could find him, and his new owners were heartbroken. For seven weeks he was missing, with no signs of him anywhere.

That is, until last Thursday when Neil opened his front door in Shillington, Bedfordshire, to see a scared, desperate, familiar-looking orange cat sitting on his doorstep meowing for help. Clearly, Neil was shocked. He quickly scooped him up in a state of disbelief to show his Leasa just what he’d found.

To give you an idea of how far poor Garfield traveled, take a look at this map below, courtesy of the Scottish Sun: 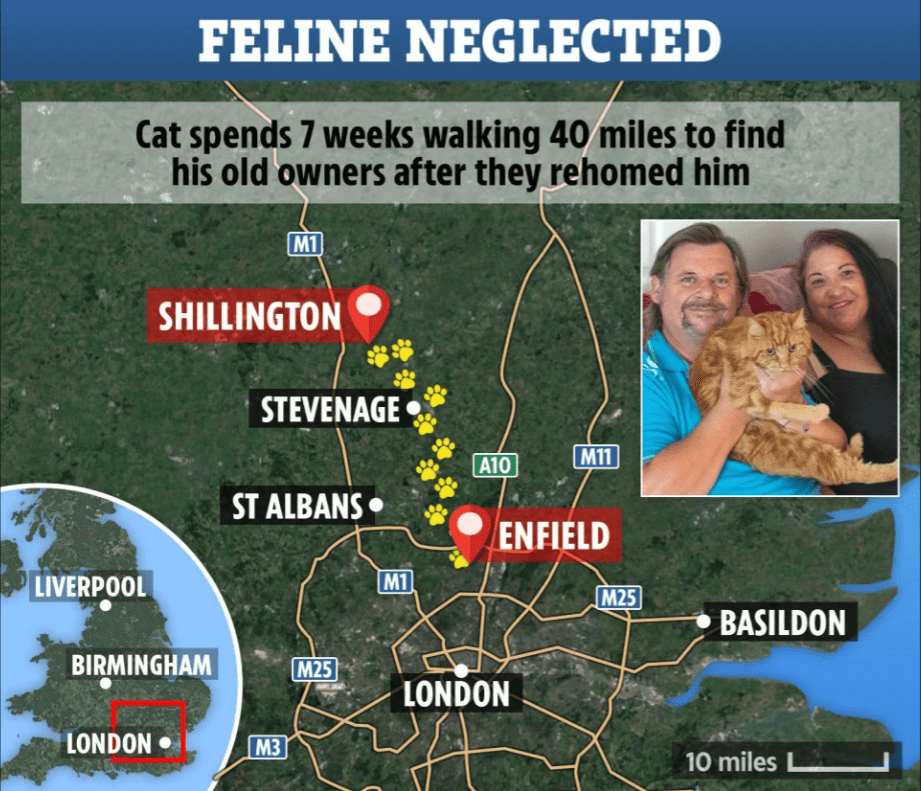 What was most surprising to the couple was that the whole time that Garfield had lived with them, he’d been an exclusively indoor cat. Thankfully for Garfield, his original owners have since had a change of heart, and have no plans to rehome him ever again. Which, I won’t lie, makes me very happy to hear. Cats are incredibly sensitive beings, and clearly Garfield decided for himself that he would do whatever it took to show the couple exactly where he belongs—at home with them.

Neil told the Daily Star, “We can’t get rid of him now—he has proven that this is his forever home.”

Have you ever heard of a cat finding their way back home before? Share with us in the comments section. If this story isn’t proof enough of how incredibly devoted and loyal cats are, I don’t know what is.

All Images Courtesy of The Daily Star / John McLellan

Cat Rescued From House Fire And Cared For...