Time and time again, we hear amazing stories of animals doing incredible things. This story is no different.

Five years ago, Danielle Schafer spotted s a small litter of feral stray kittens on the side of a road. Immediately, she did her best to bring the frightened kittens to safety. Try as she might, Danielle was unable to catch all but one tiny weeks old kitten in her grasp. She named the short-haired tabby Kitty, and kept her as her own.

A native New Yorker and vet student at the Cornell University College of Veterinary Medicine, Danielle recently relocated to Ithaca to complete her degree. And, of course, Kitty came along for the next part of their journey together.

Before going to bed on October 21st, Danielle got her hospital scrubs in order and was asleep before midnight. Suddenly, at 2AM, Kitty demanded that her human wake up—and fast! Kitty pounced repeatedly onto Danielle, bumping her 12lb body on top of her human’s chest while she slept. Within moments, Danielle was awoken to not only her anxious feline, but to the sounds of banging against the wall.

Danielle’s apartment was engulfed in flames: “I thought someone was trying to break in.”

When she rushed into the kitchen, she saw a wall of red flames. She ran back to her bedroom in the small apartment to fetch her brave feline and bring her and her cat to safety. Thinking fast, she screamed, unable to find her cat.

“It was pitch-black smoke, and I tried opening the bedroom windows…I was yelling, ‘Kitty! Kitty! Kitty!’”

The sounds grew louder from the flames, and the banging that she’d heard continued, which she later learned were actually propane tanks exploding nearby.

The worst part of the ordeal? Danielle claims that she never once heard a fire alarm go off: “It almost sounded like a peaceful crackling fire.”

Watch the video below:

Frantic, Danielle slipped through the patio. The moment she was outside, she screamed loudly for help as firefighters and residents swarmed all around. She knew that kitty was alive, and she had to find her:

“I have to find find my cat. She saved my life, I need to save hers.”

The sergeant on the scene insisted that her bedroom had been checked, but there was no sign of Kitty. Danielle called to her cat, searching under cars and in bushes in tears. Any place in which a scared cat would hide. 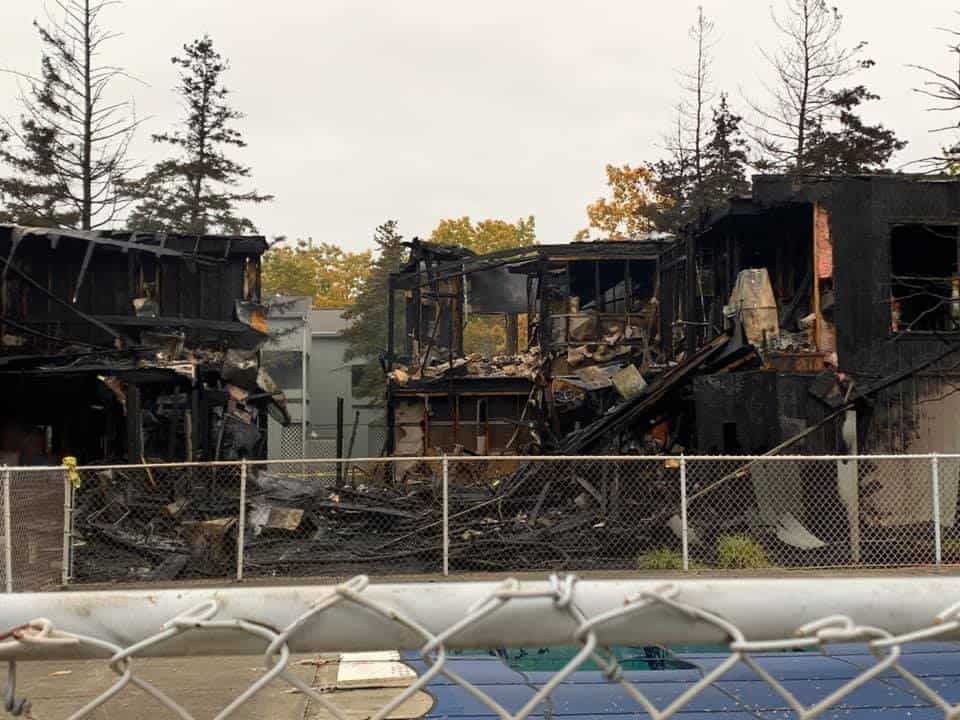 Then, she heard a firefighter yelling out to her. She describes it like a scene from a movie…

“Is my cat dead?” she asked in tears.

Kitty was safe, right in his arms.

The feline had hidden herself from the smoke in a cocoon of pillows in Danielle’s bedding. Following the incident, Kitty was treated for smoke inhalation and corneal abrasions at Cornell’s Companion Animal Hospital. Danielle and her hero cat are staying with family in Long Island with plans to return back soon: “She’s thrilled to be home.”

As you can see in this video, when Kitty isn’t saving the day, she’s a super sweet cat:

It was reported that all residents and their pets made it out of the fire safely.

Do you have a brave cat story to share with us? Read about another rescue kitty who recently saved her human—from a giant Copperhead snake!

All Images Courtesy of Danielle Schafer and USA Today

Man Shocked When Shelter Calls After His Cat–That His Girlfriend WAS Caring For–Is Picked Up As Stray!