Home CatsBig Cats This Rescue Puma Can’t Live In The Wild, So He Spends His Days In A Loving Home
Big CatsCat NewsCatsRescue stories

This Rescue Puma Can’t Live In The Wild, So He Spends His Days In A Loving Home

If you think your house cat is big, think again. Messi tips the scales at a whopping 90 lbs, but that’s okay because he’s not your average house cat. Messi is a rescue kitty of a different kind. He’s actually a rescued puma. Now, I know what you’re thinking, how on Earth can a puma be kept as a pet?! 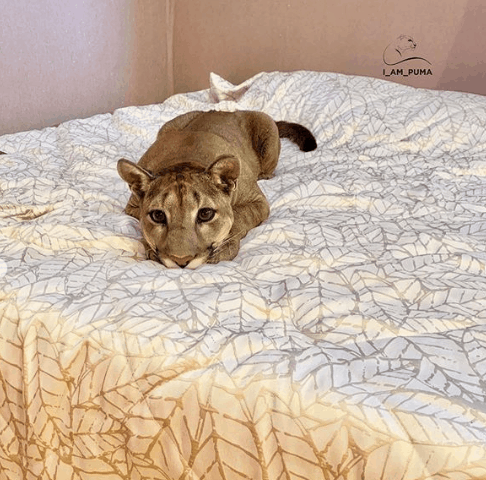 Well, from his precious photos, you can see that he manages just fine! And, given that his cat parents are still here, he’s not out for blood or looking to turn his humans into a snack while they are fast asleep.

Messi, when he first came to live with the couple in May 2017, and below, is present day… 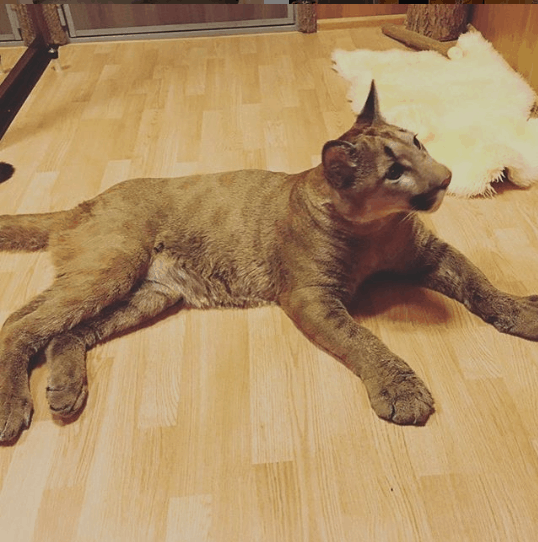 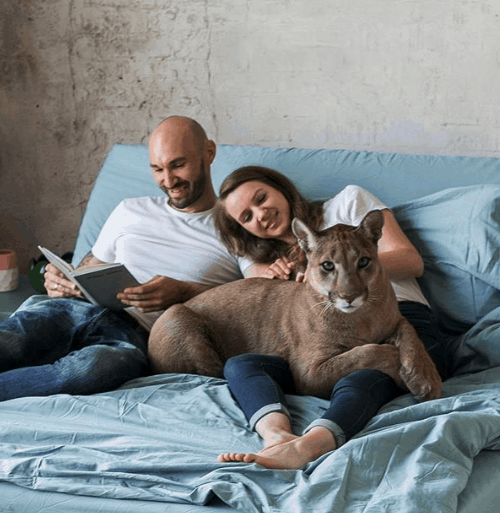 About Messi, as told (and translated to English) from his YouTube channel I_am_puma:

Hello! We are Sasha and Masha, and this is our cat, his name is Messi. We bought this puma from the contact zoo at the age of one year. Together we live in an ordinary apartment where Messi organized his cozy corner. We go to the toilet twice a day; we walk there and waste energy. 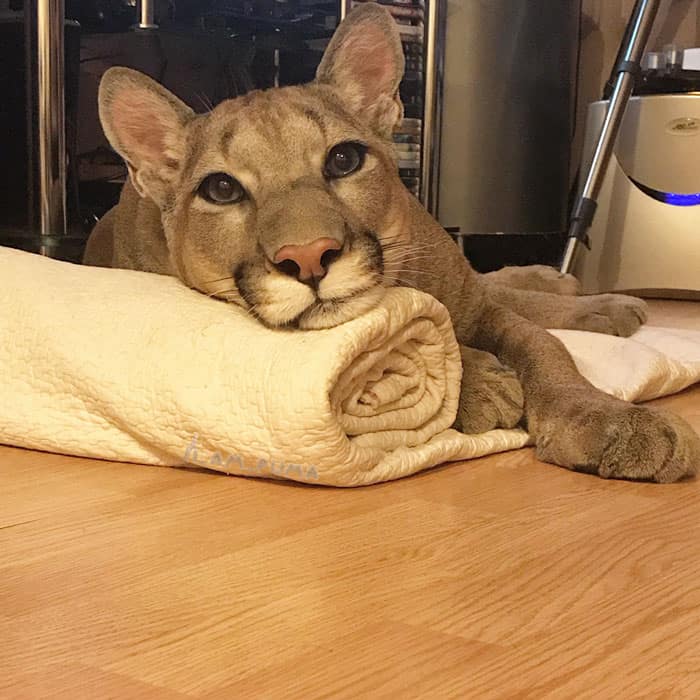 The cat eats only meat products, a properly balanced diet. Strictly according to the regulations. In addition, we go to training classes 4 times a week. Messi is a very affectionate and contact cat, does not bite, does not spoil furniture and plays without claws. He likes to be stroked and loves to talk. Still with us lives a kitten (sphinx) Cyrus and she does not really like a cat. She pounds him with his paws and hisses at him. 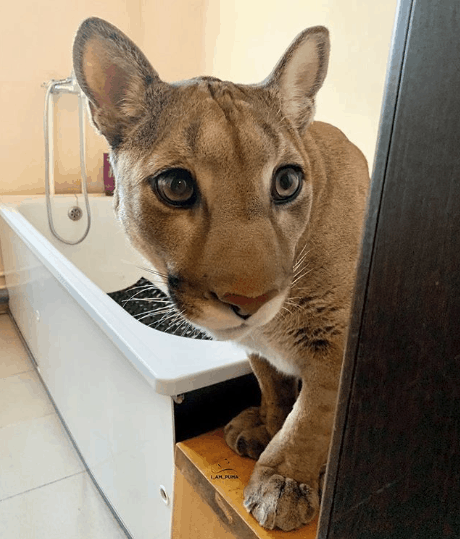 As you can see, Messi’s a silly and playful kitty! 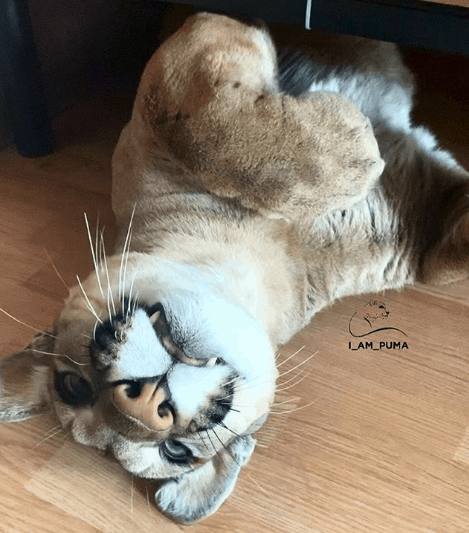 How Messi the Puma came to live with them…

Mariya and Aleksandr Dmitriev first saw Messi when he was a cub living at Saransk Zoo in Penza, Russia. As a cub, Messi struggled with health issues and the couple wished they could give him a better life outside of cages where his health proved to only worsen. “We had three days of thinking hard about whether it was moral to keep a puma, and whether it was common sense to have one. But nothing could fight our sudden wish,” Mariya told UK’s The Mirror. “So we went to the zoo and started negotiations to buy Messi. We were surprised ourselves when they agreed.” 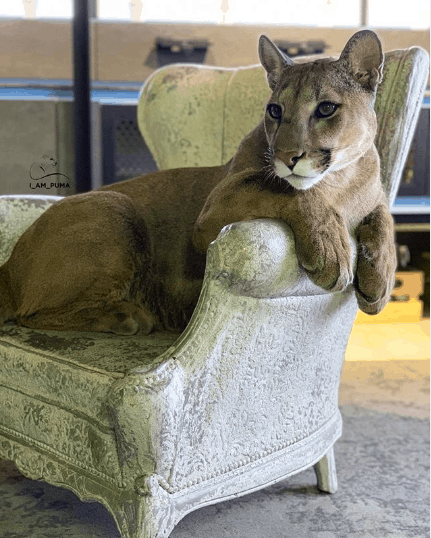 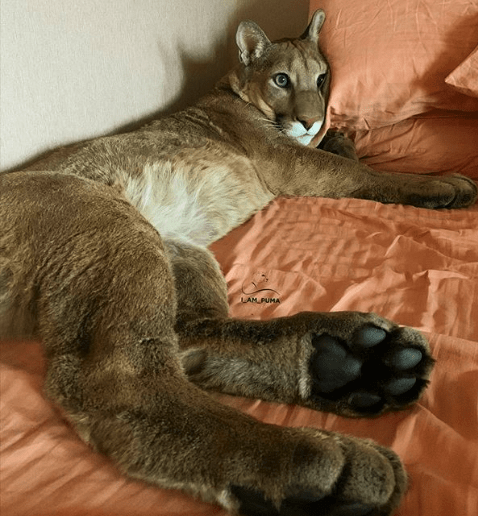 To care for him, the couple invested in a special harness and leash so that they can take him out for regular walks. And they’ve even adapted their hallway into a makeshift “puma playpen” for him to occupy. 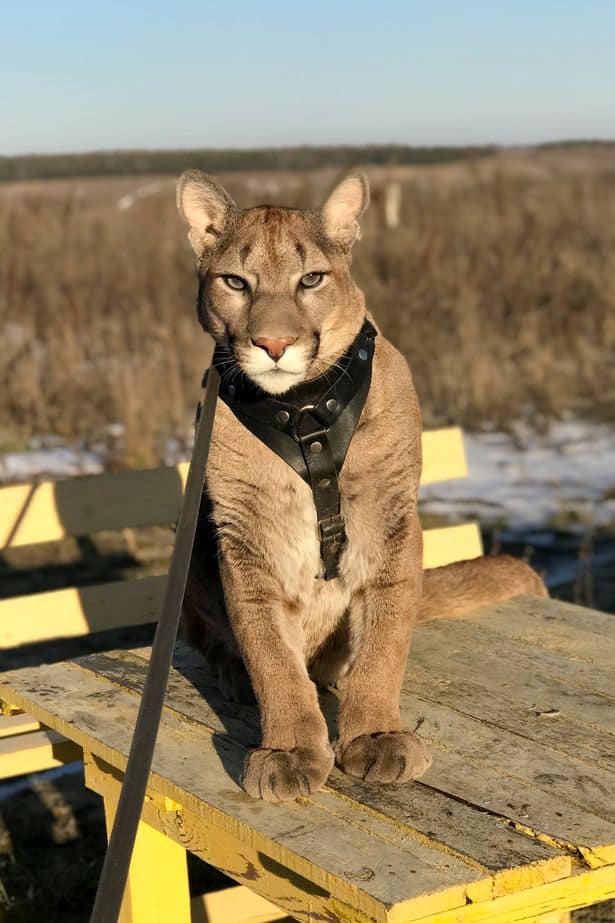 “We were so happy, and even though he was quite weak and demanded a lot of attention, we didn’t regret our decision at all,” Mariya says.

The couple was interviewed by the Mirror about their unusual housecat. Mariya explains that:

“Because of his health problems he is only two-thirds the size of a normal puma and only weighs 90lbs, but that’s still 10 times more than an average cat. Of course it’s quite dangerous having such a large cat at home, but Messi is a special animal. 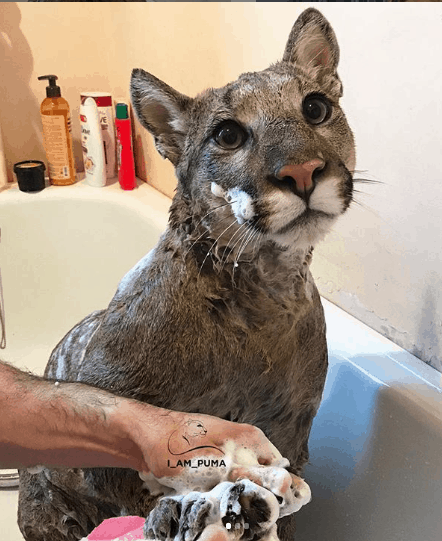 Everyone who knows him thinks he is a human in a puma’s skin. He is very talkative and always answers when we speak to him. Sometimes he agrees with what we say, but sometimes he can be insulted. He’s and incredible animal. We are so lucky he is like he is and we would not recommend having wild cats at home.” 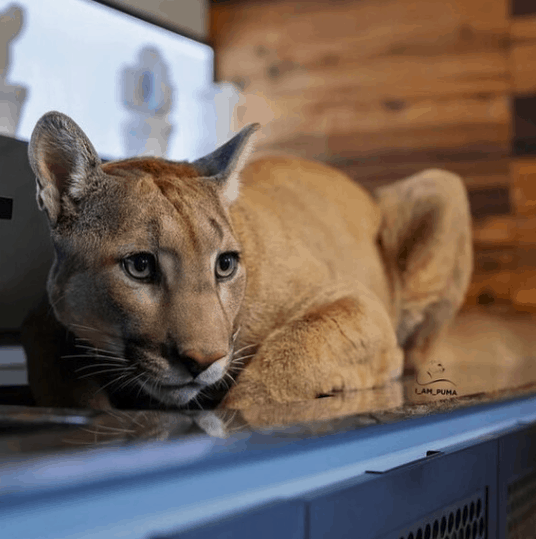 His humans are animal advocates, and are not promoting others to bring a big cat into their home as a pet. We live in a world where some might think that this sort of behavior is acceptable. But Messi’s humans understand that this is a hot topic and they know that her situation with them is truly unique. 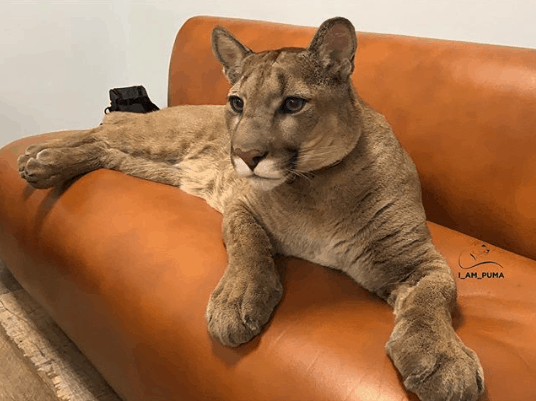 “We sincerely do not recommend bringing a cougar into your home. It is very dangerous! Messi is unique, do not repeat this!”

Just look at this video of Messi in the morning after a good night’s rest, he’s as playful and happy as can be!