MetLife Stadium made an announcement regarding the Monday Night Football black cat that caught the attention of millions this week, see below…

ABC 7 News in New York also shared a news story on this show-stopping black cat that’s become a cause of concern for cat lovers everywhere. Check it out…

For one black cat in New Jersey, he’s decided that Halloween isn’t over yet. During last night’s Monday Night Football game between the New York Giants and the Dallas Cowboys at MetLife Stadium in East Rutherford, New Jersey, a black cat took the field and instantly caught the attention of everyone.

With 5:32 left in the second quarter, the curious kitty appeared on the 8-yard line, which is about the most exciting thing to happen given the low score and uneventful game. Quickly, the black cat went to work evading the officials and won the hearts of millions of cat lovers in attendance and watching at home.

Check out the video here…

Halloween isn’t over yet
😹
pic.twitter.com/XhLDP3NgJO

From the looks of the cat, the blocky head tells me it’s likely an unaltered male feral, so I hope that proper TNR efforts are made when/if they catch this show-stopping feline.

Owner and General Manager for the Dallas Cowboys Jerry Jones is usually one to put his foot in his mouth and make things all about himself, so it comes as no surprise for his comment when asked about the poor distressed cat that wandered onto the field and a live broadcast of a highly televised and attended sporting event.

ESPN.com reports that the incredibly superstitious Jones feels as if the black cat was a bad omen. But seeing as the Cowboys came back from a deficit, it seems that he should probably think harder before speaking:

“I haven’t seen one glare at me that far away before… I know he was looking at me the whole time he was out there. But things did kind of change when that black cat came out.” 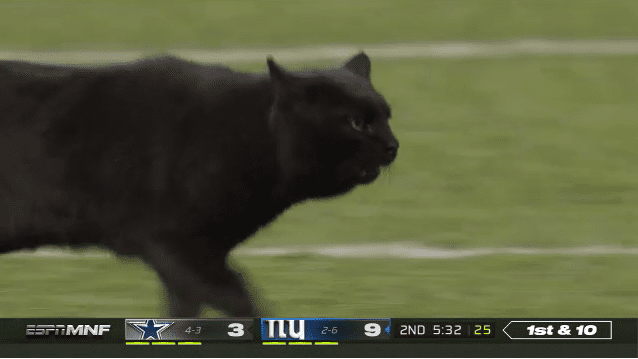 It seems that Cowboys quarterback Dak Prescott wasn’t exactly thrilled either, as well as running back Ezekiel Elliott who claims he’s allergic to cats. Obviously a cat running around the field of a professional football game isn’t an all-too-common occurrence, so some players were scratching their heads wondering what all the commotion was about:

“I didn’t know exactly what was going on at first,” Giants quarterback Daniel Jones said. “But, yeah, you don’t see that every week.”

The official Twitter account for MetLife Stadium released a stadium late last night to brief the public on the cat’s whereabouts and plans for him once safely captured:

The black cat ran off the field and disappeared under a seating section. Once we locate and safely capture the cat, we will take it to a veterinarian for examination. #BlackCat | #DALvsNYG

I say that black cats are good luck, and I sincerely hope that this poor cat is found so that he can have a forever home that’s nice and warm and far away from a crowded stadium.

Want to read a collection of fun facts about black cats? Check out our article on here on them!