I have the utmost respect for America’s veterans. They’ve risked their lives to protect our freedom and for that I am eternally grateful. For US veteran Ron Williams of Sturgis, Michigan, he will be 85 this September. He was feeling like a feline friend might be the purrfect way to pass the time and keep himself company while he spends time at home.

“I looked at him and hey, I just fell in love with him,” Ron said. Once home with Ron, the two would have many conversations, and together they formed a tight knit bond and become fast friends. 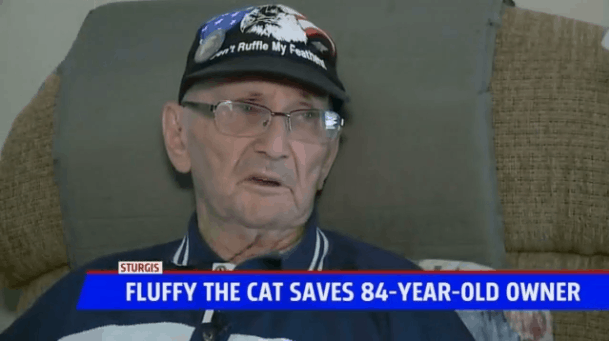 And, as it turns out, it was fate that put him and Fluffy in each other’s lives. Ron knows that if not for Fluffy, he wouldn’t be here today.

Just recently, Ron slipped when getting out of the shower. He laid there for hours in agony, his life alert charging in the other room, his phone not nearby. But Fluffy was there. His only hope. And, as it turns out, his feline hero showed him the true meaning of who rescued who. It just goes to show you, cats really do listen when you talk to them—even squirrelly kittens!

“I relive it a million times. What if he wouldn’t have been in there with me? I’d be dead today.” — Ron Williams

ABC 7 WKBW shared Roger’s story, and I warn you it might feel like someone is chopping onions next to you when you watch it!

Fluffy, you are one very good boy! If this story made you smile, share it with someone else you know who could use one, too. And if you know anyone who says that they don’t like cats, share this with them—it could easily change their mind!

Formerly Neglected Cat Loses Her Sight, But Not Her Ability To Love