Why Do Cats Love Boxes So Much?

As a connoisseur of cats, I’ve never once seen a cat that didn’t like a good old-fashioned cardboard box. Oh, and don’t forget about those shoeboxes, laundry baskets, and suitcases, too! I think all cat owners can agree, cats just simply love boxes and enclosed spaces…or anything that they can hide or squeeze their fluffy body into, regardless of size! But have you ever wondered why cats love boxes so much? Then keep reading, cat lover! 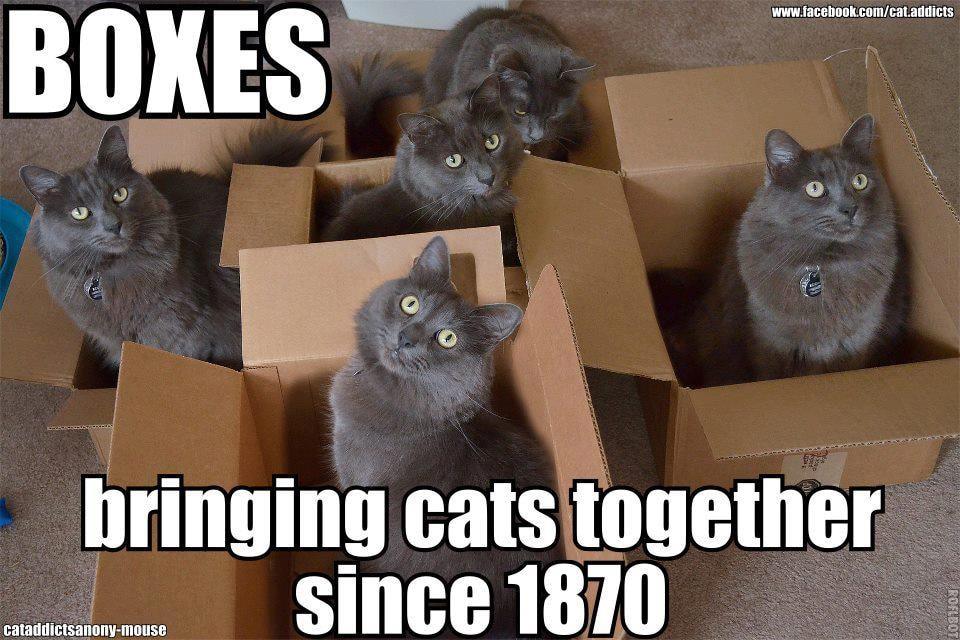 This box makes me feel safe!

Plain and simple, your cat loves the security that a box provides them. Whether they’re a small kitty in a big box or a large kitty squeezing into a tiny one, that box grants them a comfortable space that makes them feel safe and secure.

Stephen Zawistowski, science adviser for the American Society for the Prevention of Cruelty to Animals, says:

“Cats like boxes because they are cryptic animals; they like to hide…And a box gives them a place of safety and security.”

And for your feline friend who loves to sleep up to 15 hours a day, a box is the perfect spot for an extended cat nap as the walls provide them a nice hiding spot. Because as we know, cats do not like to be bothered when they are sleeping! 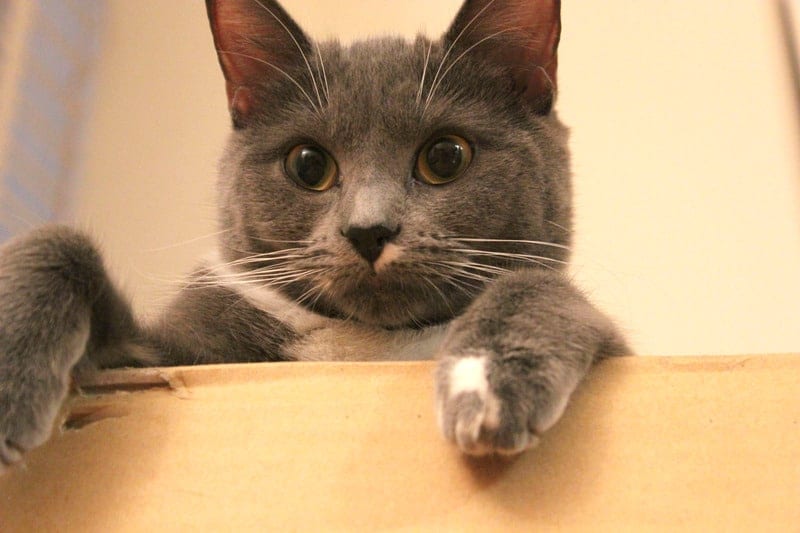 Cat bed? No, this box will do

Cat owners can definitely relate to this for sure! You’ve spent all this money buying your cat something new, and they’d much rather hang out in the box it came in rather than the item you’ve purchased just for them. And not only this cat owner reality, but there are many stories of cats accidentally getting packed in moving boxes. Please, always be careful when packing boxes if your cat is roaming around your home.

Regardless of the box size, your cat will squeeze into it because in their mind it provides them with a safe place to escape from potential dangers/threats. Your cat is not aggressive by nature, and they will avoid conflict at all costs. Hiding is much more up their alley!

I don’t know about you, but I am totally crazy for big cats, too! And although big cats and our domesticated felines have many differences, they also have some super cool similarities, too. Have you ever seen what a big cat does when they’re presented with a cardboard box?

Want to see a fun collection of cats embodying if I fits, I sits logic? Check out this silly collection of photos here on CatittudeDaily.com. 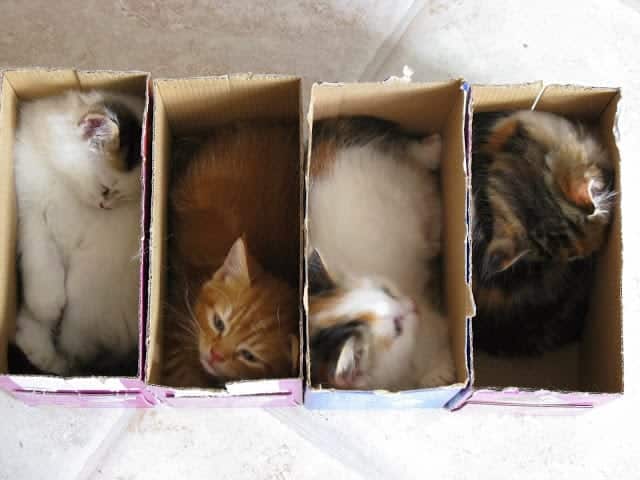 Boxes have been used to reduce stress levels of shelter cats

Science Direct shared a study out of the Netherlands where shelter cats in high stress environments were provided with boxes to test and see if it would serve to reduce their stress. Shelters are often noisy, and as we know, cats aren’t exactly fans of loud noises—likely because their sense of hearing is 5x what ours is!

The results of the study clearly indicating that the boxes provided to the shelter cats greatly reduced their stress levels and helped to calm them. See below for more details! 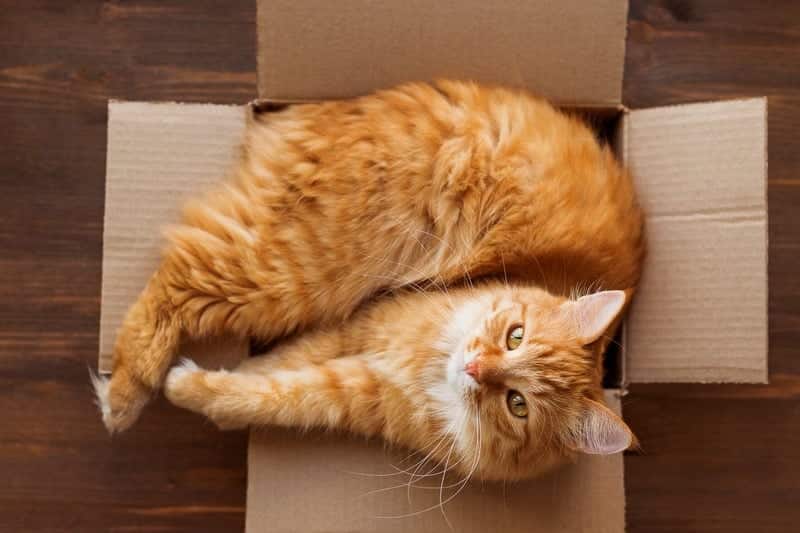 The reason the study was conducted and how it was performed:

Domestic cats (Felis silvestris catus) can experience serious stress in shelters. Stressful experiences can have a major impact on the cats’ welfare and may cause higher incidences of infectious diseases in the shelters due to raised cortisol levels causing immunodeficiency.

Though several studies showed preference for hiding places and stress reducing effects of hiding boxes on cats in combined studies, none of these studies determined if proper hiding enrichment would be effective in a quarantine cattery. These stress reducing effects are crucial in the first weeks after admission in which novelty stress is highest.

The aim of the present study was to determine the effect of a hiding box on the stress levels of newly arrived cats in a Dutch animal shelter. Therefore, 19 newly arrived shelter cats were randomly divided into two groups, with (N = 10) and without a hiding box (N = 9). To determine the stress levels of recently admitted cats, behavioural observations were done during a 14-day period according to the Kessler and Turner Cat-Stress-Score (CSS). 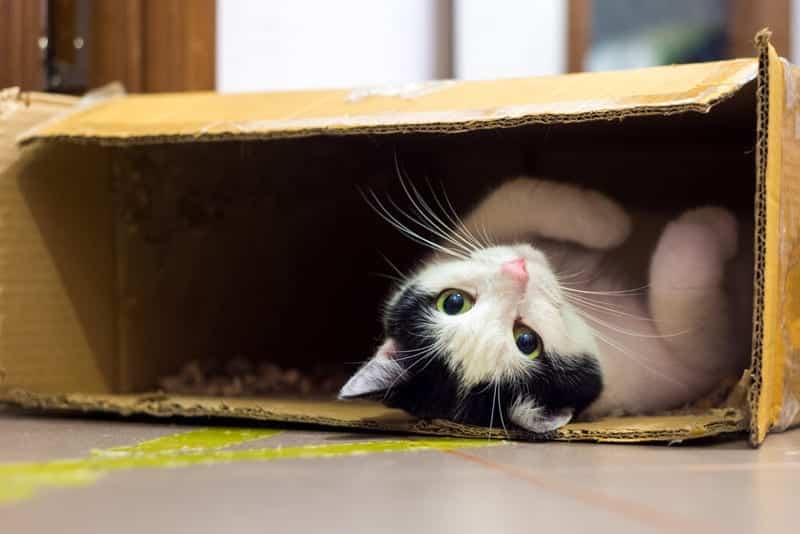 The results and findings:

These findings suggest that cats provided with a hiding box were able to recover faster in their new environment compared to cats without a hiding box, as measured by the CCS. 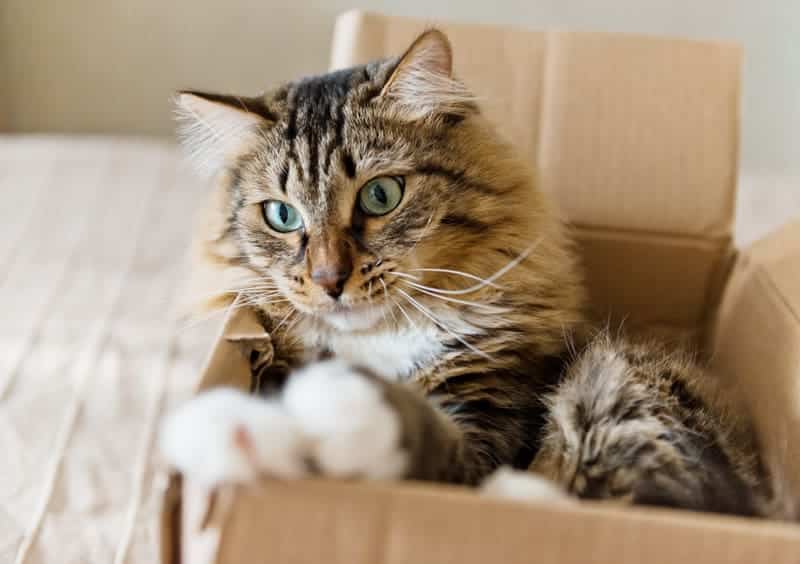 In summary, the hiding box appears to be an important enrichment for the cat to cope effectively with stressors in a new shelter environment the first weeks after arrival. Further research is needed to study the effect of a hiding box for group housed cats, its long term effects, and correlation with outbreak frequencies of infectious diseases.

So, did you learn anything new about our feline friends? Just add this info to your growing knowledge of all things feline!

Check out this super cute video on the Cattitude Daily YouTube channel, and don’t forget to subscribe!